The Congress of Vienna

The Concert of Europe was a system of dispute resolution adopted by the major conservative powers of Europe to maintain their power, oppose revolutionary movements, weaken the forces of nationalism, and uphold the balance of power.

Define the Balance of Power

Concert of Europe
Also known as the Congress System or the Vienna System after the Congress of Vienna, a system of dispute resolution adopted by the major conservative powers of Europe to maintain their power, oppose revolutionary movements, weaken the forces of nationalism, and uphold the balance of power.
Great Powers
A sovereign state recognized as having the ability and expertise to exert its influence on a global scale. They characteristically possess military and economic strength, as well as diplomatic and soft power influence, which may cause middle or small powers to consider the Great Powers’ opinions before taking actions of their own.
balance of power
A theory in international relations that suggests that national security is enhanced when military capability is distributed so that no one state is strong enough to dominate all others. If one state becomes much stronger than others, the theory predicts it will take advantage of its strength and attack weaker neighbors, thereby providing an incentive for those threatened to unite in a defensive coalition.

As the four major European powers (Britain, Prussia, Russia, and Austria) opposing the French Empire in the Napoleonic Wars saw Napoleon’s power collapsing in 1814, they started planning for the postwar world. The Treaty of Chaumont of March 1814 reaffirmed decisions that would be ratified by the more important Congress of Vienna of 1814–15. The Congress of Vienna was the first of a series of international meetings that came to be known as the Concert of Europe, an attempt to forge a peaceful balance of power in Europe. It served as a model for later organizations such as the League of Nations in 1919 and the United Nations in 1945. They included the establishment of a confederated Germany, the division of French protectorates and annexations into independent states, the restoration of the Bourbon kings of Spain, the enlargement of the Netherlands to include what in 1830 became modern Belgium, and the continuation of British subsidies to its allies. The Treaty of Chaumont united the powers to defeat Napoleon and became the cornerstone of the Concert of Europe, which formed the balance of power for the next two decades. The basic tenet of the European balance of power is that no single European power should be allowed to achieve hegemony over a substantial part of the continent and that this is best curtailed by having a small number of ever-changing alliances contend for power.

The Congress of Vienna dissolved the Napoleonic world and attempted to restore the monarchies Napoleon had overthrown, ushering in an era of reaction. Under the leadership of Metternich, the prime minister of Austria (1809–48) and Lord Castlereagh, the foreign minister of Great Britain (1812–22), the Congress set up a system to preserve the peace. Under the Concert of Europe, the major European powers—Britain, Russia, Prussia, Austria, and (after 1818) France—pledged to meet regularly to resolve differences. The goal was not simply to restore old boundaries but to resize the main powers so they could balance each other and remain at peace. The leaders were conservatives with little use for republicanism or revolution, both of which threatened to upset the status quo in Europe. This plan was the first of its kind in European history and seemed to promise a way to collectively manage European affairs and promote peace.

The Congress resolved the Polish–Saxon crisis at Vienna and the question of Greek independence at Laibach. Three major European congresses took place. The Congress of Aix-la-Chapelle (1818) ended the occupation of France. The others were meaningless as each nation realized the Congresses were not to their advantage, as disputes were resolved with a diminishing degree of effectiveness.

The Congress was the first occasion in history where, on a continental scale, national representatives came together to formulate treaties instead of relying mostly on messages between the several capitals. The Congress of Vienna settlement, despite later changes, formed the framework for European international politics until the outbreak of the First World War in 1914.

The Conservative Order is a term applied to European political history after the defeat of Napoleon in 1815. From 1815 to 1830 a conscious program by conservative statesmen, including Metternich and Castlereagh, was put in place to contain revolution and revolutionary forces by restoring old orders, particularly previous ruling aristocracies.

Britain, Prussia, Russia, and Austria renewed their commitment to prevent any restoration of Bonapartist power and agreed to meet regularly in conferences to discuss their common interests. This period contains the time of the Holy Alliance, a military agreement. The Concert of Europe was the political framework that grew out of the Quadruple Alliance in November 1815.

The goal of the conservatives at the Congress, led by Prince Klemens von Metternich of Austria, was to reestablish peace and stability in Europe. To accomplish this, a new balance of power had to be established. Metternich and the other four represented states sought to do this by restoring old ruling families and creating buffer zones between major powers. To contain the still powerful French, the House of Orange-Nassau was put on the throne in the Netherlands, which formerly comprised the Dutch Republic and the Austrian Netherlands (Belgium). To the southeast of France, Piedmont (officially part of the kingdom of Sardinia) was enlarged. The Bourbon dynasty was restored to France and Spain as well as a return of other legitimate rulers to the Italian states. And to contain the Russian empire, Poland was divided up between Austria, Prussia, and Russia.

The Concert of Europe, also known as the Congress System or the Vienna System after the Congress of Vienna, was a System of dispute resolution adopted by the major conservative powers of Europe to maintain their power, oppose revolutionary movements, weaken the forces of nationalism, and uphold the balance of power. It grew out of Congress of Vienna. It operated in Europe from the end of the Napoleonic Wars (1815) to the early 1820s.

The Concert of Europe was founded by the powers of Austria, Prussia, the Russian Empire, and the United Kingdom, who were the members of the Quadruple Alliance that defeated Napoleon and his First French Empire. In time, France was established as a fifth member of the Concert. At first, the leading personalities of the system were British foreign secretary Lord Castlereagh, Austrian Chancellor Klemens von Metternich, and Tsar Alexander I of Russia. Charles Maurice de Talleyrand-Périgord of France was largely responsible for quickly returning that country to its place alongside the other major powers in international diplomacy. 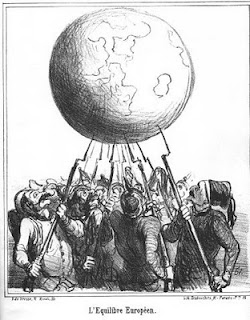 The basic tenet of the European balance of power that reigned from 1814 to WWI is that no single European power should be allowed to achieve hegemony over a substantial part of the continent and that this is best curtailed by having a small number of ever-changing alliances contend for power.
An image of a cartoon by Honore Daumier, L’Equilibre Europea, that depicts many people holding up the globe with bayonets.