Participants of the Congress

The leading participants of the Congress of Vienna were British foreign secretary Lord Castlereagh, Austrian Chancellor Klemens von Metternich, and Tsar Alexander I of Russia, all of whom had a reactionary, conservative vision for Europe after the Napoleonic Wars, favoring stability and the status quo over liberal progress.

Identify the participants in the Congress of Vienna and their representatives

Napoleonic Wars
A series of major conflicts pitting the French Empire and its allies, led by Napoleon I, against a fluctuating array of European powers formed into various coalitions, primarily led and financed by the United Kingdom. War broke out as a continuation of the French Revolution, which had plunged the European continent into war since 1792.
reactionary
A person who holds political views that favor a return to the status quo ante, the previous political state of society, which they believe possessed characteristics (discipline, respect for authority, etc.) that are negatively absent from the contemporary status quo of a society.
Klemens von Metternich
A politician and statesman of Rhenish extraction and one of the most important diplomats of his era, serving as the Austrian Empire’s Foreign Minister from 1809 and Chancellor from 1821 until the liberal revolutions of 1848 forced his resignation. He led the Austrian delegation at the Congress of Vienna that divided post-Napoleonic Europe amongst the major powers.

The Congress of Vienna was a conference of ambassadors of European states chaired by Austrian statesman Klemens Wenzel von Metternich and held in Vienna from November 1814 to June 1815, though the delegates had arrived and were already negotiating by late September 1814. The objective of the Congress was to provide a long-term peace plan for Europe by settling critical issues arising from the French Revolutionary Wars and the Napoleonic Wars. In a technical sense, the “Congress of Vienna” was not properly a Congress: it never met in plenary session, and most of the discussions occurred in informal, face-to-face sessions among the Great Powers of Austria, Britain, France, Russia, and sometimes Prussia, with limited or no participation by other delegates.

Major Participants of the Congress

The Congress functioned through formal meetings such as working groups and official diplomatic functions; however, a large portion was conducted informally at salons, banquets, and balls.

Austria was represented by Prince Klemens von Metternich, the Foreign Minister, and by his deputy, Baron Johann von Wessenberg. As the Congress’s sessions were in Vienna, Emperor Francis was kept closely informed. Metternich was one of main architects of the balance of power in Europe and approached the matter from a perspective of conservatism. He was a staunch opponent of liberalism and nationalism, favoring instead the preservation of the status quo in the face of the revolutionary challenge. He was also wary of Russian dominance. Critics of his diplomatic agenda paint him as the man who prevented Austria and the rest of central Europe from “developing along normal liberal and constitutional lines.” Had Metternich not stood in the way of “progress,” some argue, Austria might have reformed and dealt better with its problems of nationality, and the First World War might never have happened.

Great Britain was represented first by its Foreign Secretary, Viscount Castlereagh, then by the Duke of Wellington, after Castlereagh’s return to England in February 1815. In the last weeks it was headed by the Earl of Clancarty after Wellington left to face Napoleon during the Hundred Days. Castlereagh, a conservative like Metternich, had a vision of long-term peace in Europe that united efforts of the great powers. At the same time he was watchful of Britain’s mercantile and imperial interests. He saw that a harsh treaty based on vengeance and retaliation against France would fail, and anyway the conservative Bourbons were back in power. He employed his diplomatic skills to block harsh terms. Bringing France back into diplomatic balance was important to his vision of peace.

Tsar Alexander I controlled the Russian delegation formally led by the foreign minister, Count Karl Robert Nesselrode. The tsar had three main goals: to gain control of Poland, to form a league that could intervene and stop revolutions against monarchies and traditionalism, and to promote the peaceful coexistence of European nations. He succeeded in forming the Holy Alliance (1815), based on monarchism and anti-secularism, and formed to combat any threat of revolution or republicanism.

Prussia was represented by Prince Karl August von Hardenberg, the Chancellor, and the diplomat and scholar Wilhelm von Humboldt. King Frederick William III of Prussia was also in Vienna, playing his role behind the scenes. Hardenberg was more liberal than the other main participants, and earlier in his career implemented a variety of liberal reforms. To him and Baron von Stein, Prussia was indebted for improvements in its army system, the abolition of serfdom and feudal burdens, the opening of civil service to all classes, and the complete reform of the educational system. However, by the time of the Congress of Vienna, the zenith of his influence, if not of his fame, was passed. In diplomacy he was no match for Metternich, whose influence soon overshadowed his own. During his late career he acquiesced to reactionary policies along the lines of the rest of the Congress.

France, the “fifth” power, was represented by its foreign minister, Talleyrand, as well as the Minister Plenipotentiary the Duke of Dalberg. Talleyrand had already negotiated the Treaty of Paris (1814) for Louis XVIII of France; the king, however, distrusted him and was also secretly negotiating with Metternich by mail. Talleyrand played a major role at the Congress, where he negotiated a favorable settlement for France while undoing Napoleon’s conquests. He sought a negotiated secure peace so as to perpetuate the gains of the French revolution.

Initially, the representatives of the four victorious powers hoped to exclude the French from serious participation in the negotiations, but Talleyrand skillfully managed to insert himself into “her inner councils” in the first weeks of negotiations. He allied himself to a Committee of Eight lesser powers (including Spain, Sweden, and Portugal) to control the negotiations. Once Talleyrand was able to use this committee to make himself a part of the inner negotiations, he then left it, once again abandoning his allies.

Congress Secretary Friedrich von Gentz reported, “The intervention of Talleyrand and Labrador has hopelessly upset all our plans. Talleyrand protested against the procedure we have adopted and soundly [be]rated us for two hours. It was a scene I shall never forget.”

Virtually every state in Europe had a delegation in Vienna – more than 200 states and princely houses were represented at the Congress. In addition, there were representatives of cities, corporations, religious organizations (for instance, abbeys), and special interest groups (e.g. a delegation representing German publishers, demanding a copyright law and freedom of the press). The Congress was noted for its lavish entertainment: according to a famous joke it did not move, but danced. 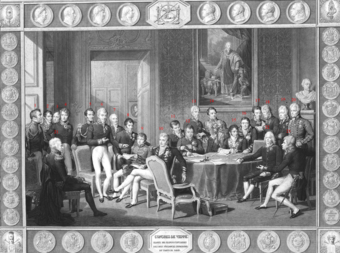