The goal of the Congress of Vienna was not simply to restore old boundaries but to resize the main powers so they could balance each other and remain at peace.

Holy Roman Empire
A multi-ethnic complex of territories in central Europe that developed during the Early Middle Ages and continued until its dissolution in 1806. The largest territory of the empire after 962 was the Kingdom of Germany, though it also came to include the Kingdom of Bohemia, the Kingdom of Burgundy, the Kingdom of Italy, and numerous other territories.
Hundred Days
The period between Napoleon’s return from exile on the island of Elba to Paris on March 20, 1815, and the second restoration of King Louis XVIII on July 8, 1815, (a period of 111 days). Napoleon returned during the Congress of Vienna. On March 13, seven days before Napoleon reached Paris, the powers at the Congress of Vienna declared him an outlaw. On March 25, Austria, Prussia, Russia, and the United Kingdom, members of the Seventh Coalition, bound themselves to put 150,000 men each into the field to end his rule. This set the stage for the last conflict in the Napoleonic Wars, the defeat of Napoleon at the Battle of Waterloo, the restoration of the French monarchy for the second time, and the permanent exile of Napoleon to the distant island of Saint Helena, where he died in May 1821.
Duchy
A country, territory, fief, or domain ruled by a duke or duchess. The term is used almost exclusively in Europe, where in the present day there is no sovereign duchy (i.e. with the status of a nation state) left.

The Congress of Vienna (1814–1815) dissolved the Napoleonic world and attempted to restore the monarchies Napoleon had overthrown, ushering in an era of conservatism. Under the leadership of Metternich, the prime minister of Austria (1809–48) and Lord Castlereagh, the foreign minister of Great Britain (1812–22), the Congress set up a system to preserve the peace. The goal was not simply to restore old boundaries but to resize the main powers so they could balance each other.

France lost all its recent conquests, while Prussia, Austria, and Russia made major territorial gains. Prussia added smaller German states in the west, Swedish Pomerania, and 40% of the Kingdom of Saxony; Austria gained Venice and much of northern Italy. Russia gained parts of Poland. The new Kingdom of the Netherlands had been created just months before and included formerly Austrian territory that in 1830 became Belgium.

The Final Act, embodying all the separate treaties, was signed on June 9, 1815, (a few days before the Battle of Waterloo).

The Congress’s principal results were the enlargements of Russia, which gained most of the Duchy of Warsaw (Poland), and Prussia, which acquired the district of Poznań, Swedish Pomerania, Westphalia, and the northern Rhineland. The consolidation of Germany from the nearly 300 states of the Holy Roman Empire (dissolved in 1806) into a much less complex system of 39 states (four of which were free cities) was confirmed. These states formed a loose German Confederation under the leadership of Austria and Prussia. The Congress also confirmed France’s loss of the territories annexed between 1795–1810, which had already been settled by the Treaty of Paris.

Representatives at the Congress agreed to numerous other territorial changes. By the Treaty of Kiel, Norway was ceded by the king of Denmark-Norway to the king of Sweden. This sparked the nationalist movement which led to the establishment of the Kingdom of Norway on May 17, 1814, and the subsequent personal union with Sweden. Austria gained Lombardy-Venetia in Northern Italy, while much of the rest of North-Central Italy went to Habsburg dynasties (the Grand Duchy of Tuscany, the Duchy of Modena, and the Duchy of Parma).

The Papal States were restored to the Pope. The Kingdom of Piedmont-Sardinia was restored to its mainland possessions and gained control of the Republic of Genoa. In Southern Italy, Napoleon’s brother-in-law, Joachim Murat, was originally allowed to retain his Kingdom of Naples, but his support of Napoleon in the Hundred Days led to the restoration of the Bourbon Ferdinand IV to the throne.

A large United Kingdom of the Netherlands was formed for the Prince of Orange, including both the old United Provinces and the formerly Austrian-ruled territories in the Southern Netherlands. Other, less important territorial adjustments included significant gains for the German Kingdoms of Hanover (which gained East Frisia from Prussia and various other territories in Northwest Germany) and Bavaria (which gained the Rhenish Palatinate and territories in Franconia). The Duchy of Lauenburg was transferred from Hanover to Denmark, and Prussia annexed Swedish Pomerania. Switzerland was enlarged and Swiss neutrality was established. Swiss mercenaries had played a significant role in European wars for several hundred years; the Congress intended to put a stop to these activities permanently.

During the wars, Portugal lost its town of Olivença to Spain and moved to have it restored. Portugal is historically Britain’s oldest ally and with British support succeeded in having the reincorporation of Olivença decreed in Article 105 of the Final Act, which stated that the Congress “understood the occupation of Olivença to be illegal and recognized Portugal’s rights.” Portugal ratified the Final Act in 1815 but Spain would not sign, and this became the most important hold-out against the Congress of Vienna. Deciding in the end that it was better to become part of Europe than to stand alone, Spain finally accepted the Treaty on May 7, 1817; however, Olivença and its surroundings were never returned to Portuguese control and this question remains unresolved.

Great Britain received parts of the West Indies at the expense of the Netherlands and Spain and kept the former Dutch colonies of Ceylon and the Cape Colony as well as Malta and Heligoland. Under the Treaty of Paris, Britain obtained a protectorate over the United States of the Ionian Islands and the Seychelles. 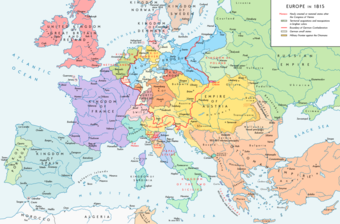