Diplomatic Consequences of the Congress of Vienna

24.1.4: Diplomatic Consequences of the Congress of Vienna

Despite the efforts of the Great Powers of Europe to prevent conflict and war with the Congress of Vienna, in many ways the Congress system failed by 1823. The rest of the 19th century was marked by more revolutionary fervor, more war, and the rise of nationalism.

Describe the diplomatic consequences of the Congress of Vienna

Quadruple Alliance
A treaty signed in Paris on November 20, 1815, by the great powers of United Kingdom, Austria, Prussia, and Russia. It renewed the use of the Congress System, which advanced European international relations.
Holy Alliance
A coalition created by the monarchist great powers of Russia, Austria, and Prussia. It was created with the intention to restrain republicanism and secularism in Europe in the wake of the devastating French Revolutionary Wars.
Crimean War
A military conflict fought from October 1853 to March 1856 in which the Russian Empire lost to an alliance of France, Britain, the Ottoman Empire, and Sardinia. The immediate cause involved the rights of Christian minorities in the Holy Land, part of the Ottoman Empire.

With the Concert of Europe, the territorial boundaries laid down at the Congress of Vienna were maintained, and even more importantly there was an acceptance of the theme of balance with no major aggression. Otherwise, the Congress system failed by 1823. In 1818 the British decided not to become involved in continental issues that did not directly affect them. They rejected the plan of Tsar Alexander I to suppress future revolutions. The Concert system fell apart as the common goals of the Great Powers were replaced by growing political and economic rivalries. Artz says the Congress of Verona in 1822 “marked the end.” There was no Congress called to restore the old system during the great revolutionary upheavals of 1848, which called for revision of the Congress of Vienna’s frontiers along national lines.

The Revolutions of 1848, known in some countries as the Spring of Nations, People’s Spring, Springtime of the Peoples, or the Year of Revolution, were a series of political upheavals throughout Europe in 1848. It remains the most widespread revolutionary wave in European history. These diverse revolutionary movements were in opposition to the conservative agenda of the Congress of Vienna and marked a major challenge to its vision for a stable Europe.

The revolutions were essentially democratic in nature, with the aim of removing the old feudal structures and creating independent national states. The revolutionary wave began in France in February and immediately spread to most of Europe and parts of Latin America. Over 50 countries were affected, but with no coordination or cooperation between their respective revolutionaries. According to Evans and von Strandmann (2000), some of the major contributing factors were widespread dissatisfaction with political leadership, demands for more participation in government and democracy, demands for freedom of press, demands made by the working class, the upsurge of nationalism, and the regrouping of established governmental forces.

The uprisings were led by shaky ad hoc coalitions of reformers, the middle classes, and workers, which did not hold together for long. Tens of thousands of people were killed and many more forced into exile. Significant lasting reforms included the abolition of serfdom in Austria and Hungary, the end of absolute monarchy in Denmark, and the introduction of parliamentary democracy in the Netherlands. The revolutions were most important in France, the Netherlands, the states that would make up the German Empire in the late 19th and early 20th century, Italy, and the Austrian Empire.

Before 1850 Britain and France dominated Europe, but by the 1850s they had become deeply concerned by the growing power of Russia and Prussia. The Crimean War of 1854–55 and the Italian War of 1859 shattered the relations among the Great Powers in Europe. Victory over Napoleonic France left the British without any serious international rival, other than perhaps Russia in central Asia.

The Crimean War (1853–56) was fought between Russia, who tried expanding its influence in the Balkans, against an alliance of Great Britain, France, Sardinia, and the Ottoman Empire. Russia was defeated.

In 1851, France under Napoleon III compelled the Ottoman government to recognize it as the protector of Christian sites in the Holy Land. Russia denounced this claim, since it claimed to be the protector of all Eastern Orthodox Christians in the Ottoman Empire. France sent its fleet to the Black Sea; Russia responded with its own show of force. In 1851, Russia sent troops into the Ottoman provinces of Moldavia and Wallachia. Britain, now fearing for the security of the Ottoman Empire, sent a fleet to join with the French, expecting the Russians would back down.

Diplomatic efforts failed. The Sultan declared war against Russia in October 1851. Following an Ottoman naval disaster in November, Britain and France declared war against Russia. Most of the battles took place in the Crimean peninsula, which the Allies finally seized. London, shocked to discover that France was secretly negotiating with Russia to form a postwar alliance to dominate Europe, dropped its plans to attack St. Petersburg and instead signed a one-sided armistice with Russia that achieved almost none of its war aims.

The Treaty of Paris, signed March 30, 1856, ended the war. It admitted the Ottoman Empire to the Concert of Europe, and the Powers promised to respect its independence and territorial integrity. Russia gave up a little land and relinquished its claim to a protectorate over the Christians in the Ottoman domains. The Black Sea was demilitarized and an international commission was set up to guarantee freedom of commerce and navigation on the Danube River.

After 1870 the creation and rise of the German Empire as a dominant nation restructured the European balance of power. For the next twenty years, Otto von Bismarck managed to maintain this balance by proposing treaties and creating many complex alliances between the European nations, such as the Triple Alliance. 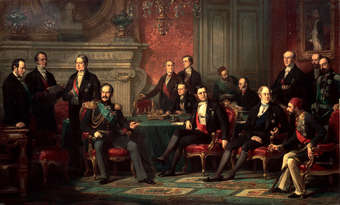 The Holy Alliance and the Quadruple Alliance

As an extension of the vision of the Congress of Vienna, the Kingdom of Prussia and the Austrian and Russian Empires formed the Holy Alliance (September 26, 1815) to preserve Christian social values and traditional monarchism. The intention of the alliance was to restrain republicanism and secularism in Europe in the wake of the devastating French Revolutionary Wars, and the alliance nominally succeeded in this until the Crimean War (1853–1856). Every member of the coalition promptly joined the Alliance, except for the United Kingdom, a constitutional monarchy with a more liberal political philosophy.

Britain did however ratify the Quadruple Alliance, signed on the same day as the Second Peace Treaty of Paris (November 20, 1815) by the same three powers that signed the Holy Alliance on September 26, 1815. It renewed the use of the Congress System, which advanced European international relations. The alliance first formed in 1813 to counter France and promised aid to each other. It became the Quintuple Alliance when France joined in 1818.

Much debate has occurred among historians as to which treaty was more influential in the development of international relations in Europe in the two decades following the end of the Napoleonic Wars. In the opinion of historian Tim Chapman, the differences are somewhat academic as the powers were not bound by the terms of the treaties and many of them intentionally broke the terms if it suited them.

The Holy Alliance was the brainchild of Tsar Alexander I. It gained support because most European monarchs did not wish to offend the Tsar by refusing to sign it, and as it bound monarchs personally rather than their governments, it was easy to ignore once signed. Although it did not fit comfortably within the complex, sophisticated, and cynical web of power politics that epitomized diplomacy of the post Napoleonic era, its influence was more lasting than contemporary critics expected and was revived in the 1820s as a tool of repression when the terms of the Quintuple Alliance were not seen to fit the purposes of some of the Great Powers of Europe.

The Quadruple Alliance, by contrast, was a standard treaty and the four Great Powers did not invite any of their allies to sign it. The primary objective was to bind the signatures to support the terms of the Second Treaty of Paris for 20 years. It included a provision for the High Contracting Parties to “renew their meeting at fixed periods…for the purpose of consulting on their common interests” which were the “prosperity of the Nations, and the maintenance of peace in Europe.” A problem with the wording of Article VI of the treaty is that it did not specify what these “fixed periods” would be, and there were no provisions in the treaty for a permanent commission to arrange and organize the conferences. This meant that the first conference in 1818 dealt with remaining issues of the French wars, but after that, meetings were arranged on an ad hoc basis to address specific threats such as those posed by revolutions.