24.2.1: Louis XVIII and the Bourbon Restoration

The Bourbon Restoration, which restored the pre-Napoleonic monarchy to the throne, was marked by conflicts between reactionary Ultra-royalists, who wanted to restore the pre-1789 system of absolute monarchy, and liberals, who wanted to strengthen constitutional monarchy.

Define the Bourbon Restoration and its goals

Napoleonic Code
The French civil code established under Napoléon I in 1804. It marked the end of feudalism and the liberation of serfs where it took effect. It recognized the principles of civil liberty, equality before the law, and the secular character of the state. It discarded the old right of primogeniture (where only the eldest son inherited) and required that inheritances be divided equally among all children. The court system was standardized; all judges were appointed by the national government in Paris.
White Terror
Following the return of Louis XVIII to power in 1815, people suspected of having ties with the governments of the French Revolution or of Napoleon suffered arrest and execution.
House of Bourbon
A European royal house of French origin, a branch of the Capetian dynasty, who first ruled France and Navarre in the 16th century and by the 18th century, also held thrones in Spain, Naples, Sicily, and Parma.
biens nationaux
Properties confiscated during the French Revolution from the Catholic Church, the monarchy, émigrés, and suspected counter-revolutionaries for “the good of the nation.”

The Bourbon Restoration was the period of French history following the fall of Napoleon in 1814 until the July Revolution of 1830. The brothers of executed Louis XVI of France reigned in highly conservative fashion, and the exiles returned. They were nonetheless unable to reverse most of the changes made by the French Revolution and Napoleon. At the Congress of Vienna they were treated respectfully, but had to give up all the territorial gains made since 1789.

King Louis XVI of the House of Bourbon had been overthrown and executed during the French Revolution (1789–1799), which in turn was followed by Napoleon as ruler of France. A coalition of European powers defeated Napoleon in the War of the Sixth Coalition, ended the First Empire in 1814, and restored the monarchy to the brothers of Louis XVI. The Bourbon Restoration lasted from (about) April 6, 1814, until the popular uprisings of the July Revolution of 1830. There was an interlude in spring 1815—the “Hundred Days”—when the return of Napoleon forced the Bourbons to flee France. When Napoleon was again defeated they returned to power in July.

During the Restoration, the new Bourbon regime was a constitutional monarchy, unlike the absolutist Ancien Régime, so it had limits on its power. The period was characterized by a sharp conservative reaction and consequent minor but consistent civil unrest and disturbances. It also saw the reestablishment of the Catholic Church as a major power in French politics.

Louis XVIII’s restoration to the throne in 1814 was effected largely through the support of Napoleon’s former foreign minister, Talleyrand, who convinced the victorious Allied Powers of the desirability of a Bourbon Restoration. The Allies had initially split on the best candidate for the throne: Britain favored the Bourbons, the Austrians considered a regency for Napoleon’s son, François Bonaparte, and the Russians were open to either the duc d’Orléans, Louis Philippe, or Jean-Baptiste Bernadotte, Napoleon’s former Marshal, who was in line for the Swedish throne. Napoleon was offered to keep the throne in February 1814 on the condition that France return to its 1792 frontiers, but he refused.

The Great Powers occupying Paris demanded that Louis XVIII implement a constitution. Louis responded with the Charter of 1814, which included many progressive provisions: freedom of religion, a legislature composed of the Chamber of Deputies, and the Chamber of Peers, a press that would enjoy a degree of freedom, and a provision that the Biens nationaux would remain in the hands of their current owners. The two Chambers’ role was consultative (except on taxation), as only the King had the power to propose or sanction laws and appoint or recall ministers. Voting was limited to men with considerable property holdings, and just 1% of people could vote.

Louis XVIII signed the Treaty of Paris on May 30, 1814. The treaty gave France its 1792 borders, which extended east of the Rhine. The country had to pay no war indemnity, and the occupying armies of the Sixth Coalition withdrew instantly from French soil.

Despite the return of the House of Bourbon to power, France was much changed from the era of the Ancien Régime. The egalitarianism and liberalism of the revolutionaries remained an important force and the autocracy and hierarchy of the earlier era could not be fully restored. The economic changes, which were underway long before the revolution, had been further enhanced during the years of turmoil and were firmly entrenched by 1815. These changes saw power shift from the noble landowners to the urban merchants.

Many of the legal, administrative, and economic reforms of the revolutionary period were left intact; the Napoleonic Code, which guaranteed legal equality and civil liberties, the peasants’ biens nationaux, and the new system of dividing the country into départments were not undone by the new king. Relations between church and state remained regulated by the Concordat of 1801. However, in spite of the fact that the Charter was a condition of the Restoration, the preamble declared it to be a “concession and grant,” given “by the free exercise of our royal authority.”

After a first sentimental flush of popularity, Louis’ gestures towards reversing the results of the French Revolution quickly lost him support among the disenfranchised majority. Symbolic acts such as the replacement of the tricolore flag with the white flag, the titling of Louis as the “XVIII” (as successor to Louis XVII, who never ruled) and as “King of France” rather than “King of the French”, and the monarchy’s recognition of the anniversaries of the deaths of Louis XVI and Marie Antoinette were significant. A more tangible source of antagonism was the pressure applied to possessors of biens nationaux by the Catholic Church and returning émigrés attempting to repossess their former lands.

On February 26, 1815, Napoleon Bonaparte escaped his island prison of Elba and embarked for France. He arrived with about 1,000 troops near Cannes on March 1. Louis XVIII was not particularly worried by Bonaparte’s excursion, as such a small number of troops could be easily overcome. There was, however, a major underlying problem for the Bourbons: Louis XVIII failed to purge the military of its Bonapartist troops. This led to mass desertions from the Bourbon armies to Bonaparte’s. Furthermore, Louis XVIII could not join the campaign against Napoleon in the south of France because he was suffering from gout.

Louis XVIII’s underestimation of Bonaparte proved disastrous. On March 19, the army stationed outside Paris defected to Bonaparte, leaving the city vulnerable to attack. That same day, Louis XVIII quit the capital with a small escort at midnight. Louis decided to go first to Lille, then crossed the border into the United Kingdom of the Netherlands, staying in Ghent.

However, Napoleon did not rule France again for very long, suffering a decisive defeat at the hands of the armies of the Duke of Wellington and Field Marshal Blücher at the Battle of Waterloo on June 18. The Allies came to the consensus that Louis XVIII should be restored to the throne of France.

Talleyrand was again influential in seeing that the Bourbons reigned, as was Fouché, Napoleon’s minister of police during the Hundred Days. After the Hundred Days, a harsher peace treaty was imposed on France, returning it to its 1789 boundaries and requiring a war indemnity. Allied troops were to remain in the country until it was paid.

Louis XVIII’s role in politics from the Hundred Days onward was voluntarily diminished; he resigned most of his duties to his council. He and his ministry embarked on a series of reforms through the summer of 1815. The king’s council, an informal group of ministers that advised Louis XVIII, was dissolved and replaced by a tighter knit privy council, the “Ministère de Roi.” Talleyrand was appointed as the first Président du Conseil, i.e. Prime Minister of France. On July 14, the ministry dissolved the units of the army deemed “rebellious.” Hereditary peerage was reestablished to Louis’s behest by the ministry.

In August, elections for the Chamber of Deputies returned unfavorable results for Talleyrand. The ministry wished for moderate deputies, but the electorate voted almost exclusively for ultra-royalists. Talleyrand tendered his resignation on September 20. Louis XVIII chose the Duke of Richelieu to be his new Prime Minister. Richelieu was chosen because he was accepted by Louis’s family and the reactionary Chamber of Deputies.

Anti-Napoleonic sentiment was high in Southern France, and this was prominently displayed in the White Terror, the purge of all important Napoleonic officials from government and the execution of others. The people of France committed barbarous acts against some of these officials. Guillaume Marie Anne Brune (a Napoleonic marshal) was savagely assassinated and his remains thrown into the Rhône River. Louis XVIII deplored such illegal acts, but vehemently supported the prosecution of marshals that helped Napoleon in the Hundred Days. The White Terror claimed 300 victims.

The king was reluctant to shed blood, which greatly irritated the ultra-reactionary Chamber of Deputies, who felt that Louis XVIII was not executing enough people. The government issued a proclamation of amnesty to the “traitors” in January 1816, but the trials in progress were finished in due course. That same declaration banned any member of the House of Bonaparte from owning property in or entering France.

In 1823, France intervened in Spain where a civil war had deposed King Ferdinand VII. The British objected as this brought back memories of the still recent Peninsular War. However, the French troops marched into Spain, retook Madrid from the rebels, and left almost as quickly as they came. Despite worries to the contrary, France showed no sign of returning to an aggressive foreign policy and was admitted to the Concert of Europe in 1818.

Louis XVIII died on September 16, 1824, and was succeeded by his brother, the comte d’Artois, who took the title of Charles X. 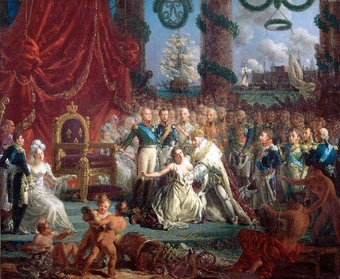