Charles X and the July Revolution

In 1830 the discontent caused by Charles X’s conservative policies and his nomination of the Ultra prince de Polignac as minister culminated in an uprising in the streets of Paris, known as the July Revolution, which brought about an end to the Bourbon Restoration.

Evaluate why the July Revolution occurred

ultra-royalist
A political part in 19th century France who wished for a return to the Ancien Régime of before 1789, with a view toward absolutism: domination by the nobility and “other devoted Christians.” They were anti-republican, anti-democratic, and preached Government on High by a marked noble elite. They tolerated vote censitaire, a form of democracy limited to those paying taxes above a high threshold.
Ancien Régime
The monarchic, aristocratic, social, and political system established in the Kingdom of France from approximately the 15th century until the latter part of the 18th century (“early modern France”) under the late Valois and Bourbon dynasties.
July Revolution
This uprising of 1830 saw the overthrow of King Charles X, the French Bourbon monarch, and the ascent of his cousin Louis Philippe, Duke of Orléans, who after 18 precarious years on the throne would be overthrown in 1848. It marked the shift from one constitutional monarchy, the Bourbon Restoration, to another, the July Monarchy.

Compared to his brother Louis XVIII, who ruled from 1814-1824, Charles X of France took a far more conservative line. He attempted to rule as an absolute monarch and reassert the power of the Catholic Church in France. Acts of sacrilege in churches became punishable by death, and freedom of the press was severely restricted. Finally, he tried to compensate the families of the nobles who had had their property destroyed during the Revolution.

In 1830 the discontent caused by these changes and Charles X’s authoritarian nomination of the Ultra prince de Polignac as minister culminated in an uprising in the streets of Paris, known as the 1830 July Revolution (or, in French, “Les trois Glorieuses,” the three glorious days of July 27-29). Charles was forced to flee and Louis-Philippe d’Orléans, a member of the Orléans branch of the family and son of Philippe Égalité who had voted the death of his cousin Louis XVI, ascended the throne. Louis-Philippe ruled not as “King of France” but as “King of the French” (an evocative difference for contemporaries). It was made clear that his right to rule came from the people and was not divinely granted. He also revived the tricolore as the flag of France in place of the white Bourbon flag that had been used since 1815, an important distinction because the tricolore was the symbol of the revolution.

The ascension to the throne of Charles X, the leader of the Ultra-royalist faction, coincided with the Ultras’ control of power in the Chamber of Deputies; thus, the ministry of the comte de Villèle was able to continue, and the last “restraint” (i.e., Louis) on the Ultra-royalists was removed. As the country underwent a Christian revival in the post-Revolutionary years, the Ultras saw fit to raise the status of the Roman Catholic Church once more.

On May 29, 1825, Charles was crowned in Reims in an opulent and spectacular ceremony that was reminiscent of the royal pomp of the coronations of the Ancien Régime. Some innovations were included upon request by Villèle; although Charles was hostile towards the 1814 Charter, commitment to the “constitutional charter” was affirmed with four of Napoleon’s generals in attendance.

While his brother had been sober enough to realize that France would never accept an attempt to resurrect the Ancien Régime, Charles had never been willing to accept the changes of the past four decades. He gave his Prime Minister, Jean-Baptiste de Villèle, lists of laws that he wanted ratified every time he opened parliament. In April 1825, the government approved legislation proposed by Louis XVIII but implemented only after his death, that paid an indemnity to nobles whose estates had been confiscated during the Revolution (the biens nationaux).

The law gave government bonds to those who had lost their lands in exchange for their renunciation of their ownership. This cost the state approximately 988 million francs. In the same month, the Anti-Sacrilege Act was passed. Charles’s government attempted to re-establish male-only primogeniture for families paying over 300 francs in tax, but the measure was voted down in the Chamber of Deputies.

On May 29, 1825, King Charles was anointed at the cathedral of Reims, the traditional site of consecration of French kings; it had been unused since 1775, as Louis XVIII had forgone the ceremony to avoid controversy. It was in the venerable cathedral of Notre-Dame at Paris that Napoleon consecrated his revolutionary empire, but in ascending the throne of his ancestors, Charles reverted to the old place of coronation used by the kings of France from the early ages of the monarchy.

That Charles was not a popular ruler became apparent in April 1827, when chaos ensued during the king’s review of the National Guard in Paris. In retaliation, the National Guard was disbanded but as its members were not disarmed, it remained a potential threat.

Downfall of the Bourbons

There is still considerable debate among historians as to the actual cause of the downfall of Charles X. What is generally conceded, though, is that between 1820 and 1830, a series of economic downturns combined with the rise of a liberal opposition within the Chamber of Deputies ultimately felled the conservative Bourbons.

Between 1827 and 1830, France faced an economic downturn, industrial and agricultural, that was possibly worse than the one that sparked the Revolution of 1789. A series of progressively worsening grain harvests in the late 1820s pushed up the prices on various staple foods and cash crops. In response, the rural peasantry throughout France lobbied for the relaxation of protective tariffs on grain to lower prices and ease their economic situation. However, Charles X, bowing to pressure from wealthier landowners, kept the tariffs in place.

While the French economy faltered, a series of elections brought a relatively powerful liberal bloc into the Chamber of Deputies. The 17-strong liberal bloc of 1824 grew to 180 in 1827 and 274 in 1830. This liberal majority grew increasingly dissatisfied with the policies of the centrist Martignac and the Ultra-royalist Polignac, seeking to protect the limited protections of the Charter of 1814.

Also, the growth of the liberal bloc within the Chamber of Deputies corresponded roughly with the rise of a liberal press within France. Generally centered around Paris, this press provided a counterpoint to the government’s journalistic services and to the newspapers of the right. It grew increasingly important in conveying political opinions and the political situation to the Parisian public and can thus be seen as a crucial link between the rise of the liberals and the increasingly agitated and economically suffering French masses.

Protest against the absolute monarchy was in the air. The elections of deputies on May 16, 1830, had gone very badly for King Charles X. In response, he tried repression but that only aggravated the crisis as suppressed deputies, gagged journalists, students from the University, and many working men of Paris poured into the streets and erected barricades during the “three glorious days” (French Les Trois Glorieuses) of July 26-29 1830. Charles X was deposed and replaced by King Louis-Philippe in the July Revolution. It is traditionally regarded as a rising of the bourgeoisie against the absolute monarchy of the Bourbons. Participants in the July Revolution included Marie Joseph Paul Ives Roch Gilbert du Motier, marquis de Lafayette. Working behind the scenes on behalf of the bourgeois-propertied interests was Louis Adolphe Thiers.

The July Revolution marked the shift from one constitutional monarchy, the Bourbon Restoration, to another, the July Monarchy; the transition of power from the House of Bourbon to its cadet branch, the House of Orléans; and the replacement of the principle of hereditary right by popular sovereignty. Supporters of the Bourbon were called Legitimists, and supporters of Louis Philippe Orléanists.

The Revolution broke out on July 27, 1830. Throughout the day, Paris grew quiet as the milling crowds grew larger. At 4:30 pm, commanders of the troops of the First Military division of Paris and the Garde Royale were ordered to concentrate their troops, and guns, on the Place du Carrousel facing the Tuileries, the Place Vendôme, and the Place de la Bastille. To maintain order and protect gun shops from looters, military patrols throughout the city were established, strengthened, and expanded. However, no special measures were taken to protect either the arm depots or gunpowder factories. For a time, those precautions seemed premature, but with the coming of twilight, the fighting began. According to historian Phil Mansel, “Parisians, rather than soldiers, were the aggressor. Paving stones, roof tiles, and flowerpots from the upper windows… began to rain down on the soldiers in the streets.” At first, soldiers fired warning shots into the air. But before the night was over, 21 civilians were killed. Fighting in Paris continued throughout the night.

On day two, Charles X ordered Maréchal Auguste Marmont, Duke of Ragusa, the on-duty Major-General of the Garde Royale, to repress the disturbances. Marmont’s plan was to have the Garde Royale and available line units of the city garrison guard the vital thoroughfares and bridges of the city and protect important buildings such as the Palais Royal, Palais de Justice, and the Hôtel de Ville. This plan was both ill-considered and wildly ambitious; not only were there not enough troops, but there were also nowhere near enough provisions. At 4 p.m., Charles X received Colonel Komierowski, one of Marmont’s chief aides. The colonel was carrying a note from Marmont to his Majesty:

Sire, it is no longer a riot, it is a revolution. It is urgent for Your Majesty to take measures for pacification. The honour of the crown can still be saved. Tomorrow, perhaps, there will be no more time… I await with impatience Your Majesty’s orders.

On day three, the revolutionaries were well-organized and very well-armed. In only a day and a night, over 4,000 barricades had been thrown up throughout the city. The tricolore flag of the revolutionaries – the “people’s flag” – flew over buildings, an increasing number of them important buildings. By 1:30 pm, the Tuileries Palace had been sacked. By mid-afternoon the greatest prize, the Hôtel de Ville, had been captured. A few hours later, politicians entered the battered complex and set about establishing a provisional government. Though there would be spots of fighting throughout the city for the next few days, the revolution, for all intents and purposes, was over.

The revolution of July 1830 created a constitutional monarchy. On August 2, Charles X and his son the Dauphin abdicated their rights to the throne and departed for Great Britain. Although Charles had intended that his grandson, the Duke of Bordeaux, would take the throne as Henry V, the politicians who composed the provisional government instead placed on the throne a distant cousin, Louis Philippe of the House of Orléans, who agreed to rule as a constitutional monarch. This period became known as the July Monarchy. 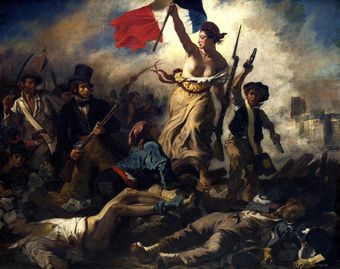 Liberty Leading the People A painting by Eugène Delacroix commemorating the July Revolution of 1830, which toppled King Charles X of France. A woman personifying the concept and the Goddess of Liberty leads the people forward over the bodies of the fallen, holding the flag of the French Revolution – the tricolore flag, which remains France’s national flag – in one hand and brandishing a bayonetted musket with the other. The figure of Liberty is also viewed as a symbol of France and the French Republic known as Marianne.