World War I began as a clash of 20th-century technology and 19th-century tactics, causing ineffective battles with huge numbers of casualties on both sides.

Zeppelin
A type of rigid airship named after the German Count Ferdinand von Zeppelin who pioneered rigid airship development at the beginning of the 20th century. Zeppelin’s notions were first formulated in 1874 and developed in detail in 1893. During World War I, the German military made extensive used these as bombers and scouts, killing over 500 people in bombing raids in Britain.
mustard gas
A cytotoxic and vesicant chemical warfare agent with the ability to form large blisters on exposed skin and in the lungs. Within 24 hours of exposure to this agent, victims experience intense itching and skin irritation, which gradually turns into large blisters filled with yellow fluid wherever the agent contacted the skin.
U-boat
Military submarines operated by Germany, particularly in the First and Second World Wars. Although at times they were efficient fleet weapons against enemy naval warships, they were most effectively used in an economic warfare role (commerce raiding), enforcing a naval blockade against enemy shipping.

World War I began as a clash of 20th-century technology and 19th-century tactics, with large ensuing casualties. By the end of 1917, however, the major armies, now numbering millions of men, had modernized and used telephones, wireless communication, armoured cars, tanks, and aircraft.

Infantry formations were reorganized so that 100-man companies were no longer the main unit of maneuver; instead, squads of 10 or so men under the command of a junior NCO were favored.

In 1914, cannons were positioned in the front line and fired directly at their targets. By 1917, indirect fire with guns (as well as mortars and even machine guns) was commonplace, using new techniques for spotting and ranging, notably aircraft and the often-overlooked field telephone. Counter-battery missions became commonplace, and sound detection was used to locate enemy batteries.

Much of the combat involved trench warfare, in which hundreds often died for each meter gained. Many of the deadliest battles in history occurred during World War I, such as Ypres, the Marne, Cambrai, the Somme, Verdun, and Gallipoli. The Germans employed the Haber process of nitrogen fixation to provide forces with a constant supply of gunpowder despite the British naval blockade. Artillery was responsible for the largest number of casualties and consumed vast quantities of explosives. The large number of head wounds caused by exploding shells and fragmentation forced the combatant nations to develop the modern steel helmet, led by the French, who introduced the Adrian helmet in 1915. It was quickly followed by the Brodie helmet, worn by British Imperial and U.S. troops, and in 1916 by the distinctive German Stahlhelm, a design with improvements still in use today.

The widespread use of chemical warfare was a distinguishing feature of the conflict. Gases used included chlorine, mustard gas, and phosgene. Chlorine gas was first used on the battlefield in April 1915 at the Second Battle of Ypres in Belgium. The unknown gas appeared to be a simple smoke screen, used to hide attacking soldiers, and Allied troops were ordered to the front trenches to repel the expected attack. The gas had a devastating effect, killing many defenders; however, because attackers were also killed when the wind changed. In the end, relatively few war casualties were caused by gas, as effective countermeasures like gas masks were quickly created. The use of chemical warfare and small-scale strategic bombing were both outlawed by the Hague Conventions of 1899 and 1907, and both proved to be of limited effectiveness though they captured the public imagination. 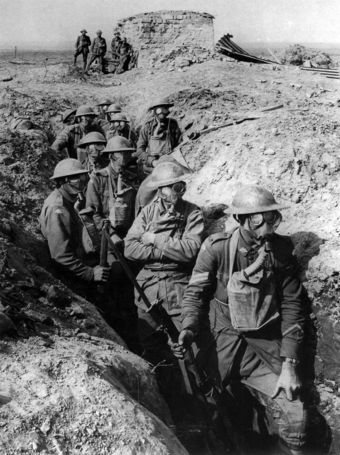 Australian infantry with gas masks, Ypres, 1917.:  The use of chemical warfare, such chlorine gas, mustard gas, and phosgene, had devastating effects until the development of effective countermeasures such as the gas mask.

The most powerful land-based weapons were railway guns, weighing dozens of tons apiece. The German ones were nicknamed Big Berthas, even though the namesake was not a railway gun. Germany developed the Paris Gun, able to bombard Paris from over 62 miles, though shells were relatively light at 210 pounds.

Trenches, machine guns, air reconnaissance, barbed wire, and modern artillery with fragmentation shells helped bring the battle lines of World War I to a stalemate. The British and the French sought a solution with the creation of the tank and mechanized warfare. The first British tanks were used during the Battle of the Somme on September 15, 1916. Mechanical reliability was an issue, but the experiment proved its worth. Within a year, the British were fielding tanks by the hundreds, and they showed their potential during the Battle of Cambrai in November 1917 by breaking the Hindenburg Line while combined arms teams captured 8,000 enemy soldiers and 100 guns. Meanwhile, the French introduced the first tanks with a rotating turret, the Renault FT, which became a decisive tool of the victory. The conflict also saw the introduction of light automatic weapons and submachine guns, such as the Lewis Gun, the Browning automatic rifle, and the Bergmann MP18. 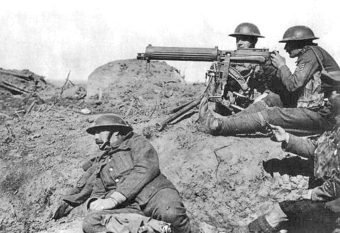 British Vickers machine gun crew on the Western Front: The machine gun emerged as one of the decisive technologies during World War I.

Another new weapon, the flamethrower, was first used by the German army and later adopted by other forces. Although not of high tactical value, the flamethrower was a powerful, demoralising weapon that caused terror on the battlefield.

Germany deployed U-boats (submarines) after the war began. Alternating between restricted and unrestricted submarine warfare in the Atlantic, the Kaiserliche Marine employed them to deprive the British Isles of vital supplies. The deaths of British merchant sailors and the seeming invulnerability of U-boats led to the development of depth charges (1916), hydrophones (passive sonar, 1917), blimps, hunter-killer submarines (HMS R-1, 1917), forward-throwing anti-submarine weapons, and dipping hydrophones (the latter two abandoned in 1918). To extend their operations, the Germans proposed supply submarines (1916). Most of these would be forgotten in the interwar period until World War II revived the need.

Fixed-wing aircraft were first used militarily by the Italians in Libya in October 1911 during the Italo-Turkish War for reconnaissance, soon followed by the dropping of grenades and aerial photography the next year. By 1914, their military utility was obvious. They were initially used for reconnaissance and ground attack. To shoot down enemy planes, anti-aircraft guns and fighter aircraft were developed. Strategic bombers were created, principally by the Germans and British, though the former used Zeppelins as well. Towards the end of the conflict, aircraft carriers were used for the first time, with HMS Furious launching Sopwith Camels in a raid to destroy the Zeppelin hangars at Tondern in 1918.

Recognized for their value as observation platforms, balloons were important targets for enemy aircraft. To defend them against air attack, they were heavily protected by antiaircraft guns and patrolled by friendly aircraft; to attack them, unusual weapons such as air-to-air rockets were even tried. Thus, the reconnaissance value of blimps and balloons contributed to the development of air-to-air combat between all types of aircraft and to the trench stalemate, because it was impossible to move large numbers of troops undetected. The Germans conducted air raids on England during 1915 and 1916 with airships, hoping to damage British morale and cause aircraft to be diverted from the front lines. The resulting panic led to the diversion of several squadrons of fighters from France.