The League of Nations

The League of Nations was formed to prevent a repetition of the First World War, but within two decades this effort failed. Economic depression, renewed nationalism, weakened successor states, and feelings of humiliation (particularly in Germany) eventually contributed to World War II.

Henry Cabot Lodge
An American Republican Senator and historian from Massachusetts best known for his positions on foreign policy, especially his battle with President Woodrow Wilson in 1919 over the Treaty of Versailles. He demanded Congressional control of declarations of war; Wilson refused and blocked his move to ratify the treaty with reservations. As a result, the United States never joined the League of Nations.
League of Nations
An intergovernmental organization founded on January 10, 1920, as a result of the Paris Peace Conference that ended the First World War. It was the first international organization whose principal mission was to maintain world peace. Its primary goals as stated in its Covenant included preventing wars through collective security and disarmament and settling international disputes through negotiation and arbitration.

The League of Nations was an intergovernmental organization founded on January 10, 1920, as a result of the Paris Peace Conference that ended the First World War. It was the first international organization whose principal mission was to maintain world peace. Its primary goals, as stated in its Covenant, included preventing wars through collective security and disarmament and settling international disputes through negotiation and arbitration. Other issues in this and related treaties included labor conditions, just treatment of native inhabitants, human and drug trafficking, the arms trade, global health, prisoners of war, and protection of minorities in Europe. At its greatest extent from September 28, 1934, to February 23, 1935, it had 58 members.

The diplomatic philosophy behind the League represented a fundamental shift from the preceding hundred years. The League lacked its own armed force and depended on the Great Powers to enforce its resolutions, keep to its economic sanctions, and provide an army when needed. However, the Great Powers were often reluctant to do so. Sanctions could hurt League members, so they were reluctant to comply. During the Second Italo-Abyssinian War, when the League accused Italian soldiers of targeting Red Cross medical tents, Benito Mussolini responded that “the League is very well when sparrows shout, but no good at all when eagles fall out.”

After a number of notable successes and some early failures in the 1920s, the League ultimately proved incapable of preventing aggression by the Axis powers in the 1930s. Germany withdrew from the League, as did Japan, Italy, Spain, and others. The onset of the Second World War showed that the League had failed its primary purpose to prevent any future world war. The League lasted for 26 years; the United Nations (UN) replaced it after the end of the Second World War in April 1946 and inherited a number of agencies and organizations founded by the League.

Establishment of the League of Nations

American President Woodrow Wilson instructed Edward M. House to draft a U.S. plan that reflected Wilson’s own idealistic views (first articulated in the Fourteen Points of January 1918), as well as the work of the Phillimore Committee. The outcome of House’s work and Wilson’s own first draft, proposed the termination of “unethical” state behavior, including forms of espionage and dishonesty. Methods of compulsion against recalcitrant states would include severe measures, such as “blockading and closing the frontiers of that power to commerce or intercourse with any part of the world and to use any force that may be necessary…”

The two principal rchitects of the covenant of the League of Nations were Lord Robert Cecil (a lawyer and diplomat) and Jan Smuts (a Commonwealth statesman). Smuts’ proposals included the creation of a Council of the great powers as permanent members and a non-permanent selection of the minor states. He also proposed the creation of a mandate system for captured colonies of the Central Powers during the war. Cecil focused on the administrative side and proposed annual Council meetings and quadrennial meetings for the Assembly of all members. He also argued for a large and permanent secretariat to carry out the League’s administrative duties.

At the Paris Peace Conference in 1919, Wilson, Cecil, and Smuts put forward their draft proposals. After lengthy negotiations between the delegates, the Hurst-Miller draft was finally produced as a basis for the Covenant. After more negotiation and compromise, the delegates finally approved of the proposal to create the League of Nations on January 25, 1919. The final Covenant of the League of Nations was drafted by a special commission, and the League was established by Part I of the Treaty of Versailles. On June 28, 44 states signed the Covenant, including 31 states that took part in the war on the side of the Triple Entente or joined it during the conflict.

The League would consist of a General Assembly (representing all member states), an Executive Council (with membership limited to major powers), and a permanent secretariat. Member states were expected to “respect and preserve as against external aggression” the territorial integrity of other members and to disarm “to the lowest point consistent with domestic safety.” All states were required to submit complaints for arbitration or judicial inquiry before going to war. The Executive Council would create a Permanent Court of International Justice to make judgments on the disputes.

Despite Wilson’s efforts to establish and promote the League, for which he was awarded the Nobel Peace Prize in October 1919, the United States did not join. Opposition in the Senate, particularly from two Republican politicians, Henry Cabot Lodge and William Borah, and especially in regard to Article X of the Covenant, ensured that the United States would not ratify the agreement. Their objections were based on the fact that by ratifying such a document, the United States would be bound by international contract to defend a League of Nations member if it was attacked. They believed that it was best not to become involved in international conflicts.

The League held its first council meeting in Paris on January 16, 1920, six days after the Versailles Treaty and the Covenant of the League of Nations came into force. On November 1, the headquarters of the League was moved from London to Geneva, where the first General Assembly was held on November 15.

Successes and Failures of the League

The aftermath of the First World War left many issues to be settled, including the exact position of national boundaries and which country particular regions would join. Most of these questions were handled by the victorious Allied powers in bodies such as the Allied Supreme Council. The Allies tended to refer only particularly difficult matters to the League. This meant that during the early interwar period, the League played little part in resolving the turmoil resulting from the war. The questions the League considered in its early years included those designated by the Paris Peace treaties.

As the League developed, its role expanded, and by the middle of the 1920s it had become the center of international activity. This change can be seen in the relationship between the League and non-members. The United States and Russia, for example, increasingly worked with the League. During the second half of the 1920s, France, Britain, and Germany were all using the League of Nations as the focus of their diplomatic activity, and each of their foreign secretaries attended League meetings at Geneva during this period. They also used the League’s machinery to improve relations and settle their differences.

In addition to territorial disputes, the League also tried to intervene in other conflicts between and within nations. Among its successes were its fight against the international trade in opium and sexual slavery and its work to alleviate the plight of refugees, particularly in Turkey in the period up to 1926. One of its innovations in this latter area was the 1922 introduction of the Nansen passport, the first internationally recognized identity card for stateless refugees.

The League failed to intervene in many conflicts leading up to World War II, including the Italian invasion of Abyssinia, the Spanish Civil War, and the Second Sino-Japanese War.

The onset of the Second World War demonstrated that the League had failed in its primary purpose, the prevention of another world war. There were a variety of reasons for this failure, many connected to general weaknesses within the organization, such as voting structure that made ratifying resolutions difficult and incomplete representation among world nations. Additionally, the power of the League was limited by the United States’ refusal to join. 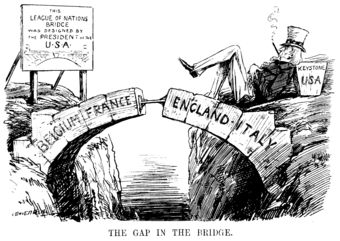 The Gap in the Bridge: The sign reads “This League of Nations Bridge was designed by the President of the U.S.A.” Cartoon from Punch magazine, December 10, 1920, satirizing the gap left by the U.S. not joining the League.