After the French defeat in the Franco-Prussian War, the German princes proclaimed the founding of the German Empire in 1871 at Versailles, uniting all scattered parts of Germany except Austria.

Reichstag
The Parliament of Germany from 1871 to 1918. It shared legislative powers with the Bundesrat, the Imperial Council of the reigning princes of the German States. It had no formal right to appoint or dismiss governments, but by contemporary standards it was considered a highly modern and progressive parliament. All German men over 25 years of age were eligible to vote, and members of were elected by general, universal, and secret suffrage.
Kaiser Wilhelm II
The last German Emperor (Kaiser) and King of Prussia, ruling the German Empire and the Kingdom of Prussia from June 1888 to November 1918. He dismissed the Chancellor Otto von Bismarck, in 1890 and launched Germany on a bellicose “New Course” in foreign affairs that culminated in his support for Austria-Hungary in the crisis of July 1914 that led in a matter of days to the First World War.
Otto von Bismarck
A conservative Prussian statesman who dominated German and European affairs from the 1860s until 1890. In the 1860s he engineered a series of wars that unified the German states, significantly and deliberately excluding Austria, into a powerful German Empire under Prussian leadership. With that accomplished by 1871, he skillfully used balance of power diplomacy to maintain Germany’s position in a Europe which, despite many disputes and war scares, remained at peace.

The German Empire (officially Deutsches Reich) was the historical German nation state that existed from the unification of Germany in 1871 to the abdication of Kaiser Wilhelm II in November 1918, when Germany became a federal republic (the Weimar Republic).

The German Empire consisted of 26 constituent territories, most ruled by royal families. This included four kingdoms, six grand duchies, five duchies (six before 1876), seven principalities, three free Hanseatic cities, and one imperial territory. Although the Kingdom of Prussia contained most of the Empire’s population and territory, it eventually played a relatively lesser role in politics. As Dwyer (2005) points out, Prussia’s “political and cultural influence had diminished considerably” by the 1890s, after the era of Bismarck’s leadership.

After Germany was united by Otto von Bismarck into the “German Reich,” he dominated German politics until 1890 as Chancellor. Bismarck tried to foster alliances in Europe to contain France and consolidate Germany’s influence in Europe. Bismarck’s post-1871 foreign policy was conservative and sought to preserve the balance of power in Europe. British historian Eric Hobsbawm concludes that he “remained undisputed world champion at the game of multilateral diplomatic chess for almost twenty years after 1871, [devoting] himself exclusively, and successfully, to maintaining peace between the powers.” His chief concern was that France would plot revenge after its defeat in the Franco-Prussian War. As the French lacked the strength to defeat Germany by themselves, they sought an alliance with Russia that would trap Germany between the two in a war (as would ultimately happen in 1914). Bismarck wanted to prevent this at all costs and maintain friendly relations with the Russians, and thereby formed an alliance with them and Austria-Hungary. The League of Three Emperors was signed in 1872 by Russia, Austria, and Germany. It stated that republicanism and socialism were common enemies and that the three powers would discuss any matters concerning foreign policy.

Bismarck’s domestic policies played an important role in forging the authoritarian political culture of the new Empire. Less preoccupied by continental power politics following unification in 1871, Germany’s semi-parliamentary government carried out a relatively smooth economic and political revolution from above that pushed them along the way to becoming the world’s leading industrial power of the time.

Bismarck’s “revolutionary conservatism” was a conservative state-building strategy designed to make ordinary Germans—not just the Junker elite—more loyal to state and emperor. His strategy was to grant social rights to enhance the integration of a hierarchical society, forge a bond between workers and the state to strengthen the latter, maintain traditional relations of authority between social and status groups, and provide a countervailing power against the modernist forces of liberalism and socialism. He created the modern welfare state in Germany in the 1880s, with an introduction of health care and social security, and enacted universal male suffrage in the new German Empire in 1871. He became a great hero to German conservatives, who erected many monuments to his memory and tried to emulate his policies.

At the same time Bismarck tried to reduce the political influence of the emancipated Catholic minority in the Kulturkampf, literally “culture struggle.” The Catholics only grew stronger, forming the Center (Zentrum) Party. Germany grew rapidly in industrial and economic power, matching Britain by 1900. Its highly professional army was the best in the world, but the navy could never catch up with Britain’s Royal Navy.

In 1888, the young and ambitious Kaiser Wilhelm II became emperor. He could not abide advice, least of all from the most experienced politician and diplomat in Europe, so he fired Bismarck. The Kaiser opposed Bismarck’s careful foreign policy and wanted Germany to pursue colonialist policies as Britain and France had been doing for decades, as well as build a navy that could match the British. The Kaiser promoted active colonization of Africa and Asia for those areas that were not already colonies of other European powers; his record was notoriously brutal and set the stage for genocide. In what became known as the “First Genocide of the Twentieth-Century,” between 1904 and 1907, the German colonial government in South-West Africa (present-day Namibia) ordered the annihilation of the local Herero and Namaqua peoples as a punitive measure for an uprising against German colonial rule, killing over 100,000 people. The Kaiser took a mostly unilateral approach in Europe with the Austro-Hungarian Empire as its main ally, and an arms race with Britain eventually led to the assassination of the Austrian-Hungarian crown prince sparked World War I.

After four years of warfare in which approximately two million German soldiers were killed, a general armistice ended the fighting on November 11, and German troops returned home. In the German Revolution (November 1918), Emperor Wilhelm II and all German ruling princes abdicated their positions and responsibilities, marking the beginning of the Weimar Republic. Germany’s new political leadership signed the Treaty of Versailles in 1919. 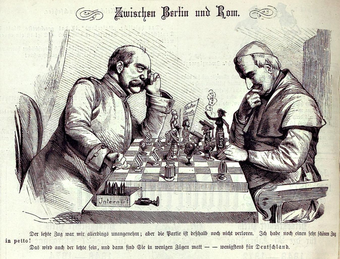 The Kulturkampf Tensions between Germany and the Catholic Church hierarchy are depicted in a chess game between Bismarck and Pope Pius IX. Cartoon from 1875.

The second German Constitution was adopted by the Reichstag on April 14, 1871, and proclaimed by the Emperor on April 16. It was substantially based upon Bismarck’s North German Constitution. The political system remained the same. The empire had a parliament called the Reichstag, which was elected by universal male suffrage. However, the original constituencies drawn in 1871 were never redrawn to reflect the growth of urban areas. As a result, by the time of the great expansion of German cities in the 1890s and first decade of the 20th century, rural areas were grossly over-represented.

Legislation also required the consent of the Bundesrat, the federal council of deputies from the 27 states. Executive power was vested in the emperor, or Kaiser, who was assisted by a chancellor responsible only to him. The emperor was given extensive powers by the constitution. He alone appointed and dismissed the chancellor (which in practice was used by the emperor to rule the empire through him), was supreme commander-in-chief of the armed forces, final arbiter of all foreign affairs, and could disband the Reichstag to call for new elections. Officially, the chancellor was a one-man cabinet and was responsible for the conduct of all state affairs; in practice, the State Secretaries (bureaucratic top officials in charge of such fields as finance, war, foreign affairs, etc.) acted as unofficial portfolio ministers. The Reichstag had the power to pass, amend, or reject bills and initiate legislation. However, as mentioned above, in practice the real power was vested in the emperor, who exercised it through his chancellor.

Although nominally a federal empire and league of equals, in practice the empire was dominated by the largest and most powerful state, Prussia. It stretched across the northern two-thirds of the new Reich, and contained three-fifths of its population. The imperial crown was hereditary in the House of Hohenzollern, the ruling house of Prussia. With the exception of the years 1872–1873 and 1892–1894, the chancellor was always simultaneously the prime minister of Prussia. With 17 out of 58 votes in the Bundesrat, Berlin needed only a few votes from the small states to exercise effective control.

The other states retained their own governments, but had only limited aspects of sovereignty. For example, both postage stamps and currency were issued for the empire as a whole.