In the 1860s, Otto von Bismarck, then Minister President of Prussia, provoked three short, decisive wars against Denmark, Austria, and France, aligning the smaller German states behind Prussia in its defeat of France. In 1871 he unified Germany into a nation-state, forming the German Empire.

Kulturkampf
Refers to power struggles between emerging constitutional and democratic nation states and the Roman Catholic Church over the place and role of religion in modern polity, usually in connection with secularization campaigns.
Junker
A noble honorific, meaning “young nobleman.” The term became popularly used as a reference for the landed nobility (particularly of the east) that controlled almost all of the land and government, or by extension the Prussian estate owners regardless of noble status. With the formation of the German Empire in 1871, this dominated the central German government and the Prussian military. The term is often contrasted with the elites of the western and southern states in Germany, such as the city-republic of Hamburg, which had no nobility.
North German Confederation
A confederation of 22 previously independent states of northern Germany with nearly 30 million inhabitants, formed after Prussia left the German Confederation with allies. It was the first modern German nation state and the basis for the later German Empire (1871–1918) when several south German states such as Bavaria joined.
realpolitik
Politics or diplomacy based primarily on considerations of given circumstances and factors, rather than explicit ideological notions or moral and ethical premises. In this respect, it shares aspects of its philosophical approach with those of realism and pragmatism. The term is sometimes used pejoratively to imply politics that are coercive, amoral, or Machiavellian.

Otto von Bismarck was a conservative Prussian statesman who dominated German and European affairs from the 1860s until 1890. In the 1860s he engineered a series of wars that unified the German states, significantly and deliberately excluding Austria, into a powerful German Empire under Prussian leadership. With that accomplished by 1871, he skillfully used balance of power diplomacy to maintain Germany’s position in a Europe which, despite many disputes and war scares, remained at peace.

In 1862, King Wilhelm I appointed Bismarck as Minister President of Prussia, a position he would hold until 1890 (except for a short break in 1873). He provoked three short, decisive wars against Denmark, Austria, and France, aligning the smaller German states behind Prussia in its defeat of France. In 1871 he formed the German Empire with himself as Chancellor while retaining control of Prussia. His diplomacy of realpolitik and powerful rule at home gained him the nickname the “Iron Chancellor.” German unification and its rapid economic growth was the foundation to his foreign policy. He disliked colonialism but reluctantly built an overseas empire when it was demanded by both elite and mass opinion. Juggling a very complex interlocking series of conferences, negotiations, and alliances, he used his diplomatic skills to maintain Germany’s position and used the balance of power to keep Europe at peace in the 1870s and 1880s.

A master of complex politics at home, Bismarck created the first welfare state in the modern world, with the goal of gaining working-class support that might otherwise have gone to his Socialist enemies. In the 1870s he allied himself with the Liberals (who were low-tariff and anti-Catholic) and fought the Catholic Church in what was called the Kulturkampf (“culture struggle”). He lost that battle as the Catholics responded by forming a powerful Centre party and using universal male suffrage to gain a bloc of seats. Bismarck then reversed himself, ended the Kulturkampf, broke with the Liberals, imposed protective tariffs, and formed a political alliance with the Centre Party to fight the Socialists.

Bismarck—a Junker himself—was strong-willed, outspoken, and sometimes judged overbearing, but he could also be polite, charming, and witty. Occasionally he displayed a violent temper, and he kept his power by melodramatically threatening resignation time and again, which cowed Wilhelm I. He possessed not only a long-term national and international vision but also the short-term ability to juggle complex developments. As the leader of what historians call “revolutionary conservatism,” Bismarck became a hero to German nationalists; they built many monuments honoring the founder of the new Reich. Many historians praise him as a visionary who was instrumental in uniting Germany and, once that had been accomplished, kept the peace in Europe through adroit diplomacy.

Franco-Prussian War and Creation of the German Empire

Prussia’s victory over Austria in 1866, a war that ended the German Confederation and resulted in the creation of the North German Confederation, increased already existing tensions with France. The Emperor of France, Napoleon III, tried to gain territory for France (in Belgium and on the left bank of the Rhine) as compensation for not joining the war against Prussia and was disappointed by the surprisingly quick outcome of the war. The conflict was caused by Prussian ambitions to extend German unification and French fears of the shift in the European balance of power that would result if the Prussians succeeded. Some historians argue that Bismarck deliberately provoked a French attack to draw the southern German states—Baden, Württemberg, Bavaria and Hesse-Darmstadt—into an alliance with the North German Confederation dominated by Prussia, while others contend that Bismarck did not plan anything and merely exploited the circumstances as they unfolded.

A suitable pretext for war arose in 1870 when the German Prince Leopold of Hohenzollern-Sigmaringen was offered the Spanish throne, vacant since a revolution in 1868. France pressured Leopold into withdrawing his candidacy. Not content with this, Paris demanded that Wilhelm, as head of the House of Hohenzollern, assure that no Hohenzollern would ever seek the Spanish crown again. To provoke France into declaring war with Prussia, Bismarck published the Ems Dispatch, a carefully edited version of a conversation between King Wilhelm and the French ambassador to Prussia, Count Benedetti. This conversation had been edited so that each nation felt its ambassador had been slighted and ridiculed, thus inflaming popular sentiment on both sides in favor of war.

France mobilized and declared war on July 19. The German states saw France as the aggressor, and—swept up by nationalism and patriotic zeal—they rallied to Prussia’s side and provided troops. A series of swift Prussian and German victories in eastern France, culminating in the Siege of Metz and the Battle of Sedan, saw Napoleon III captured and the army of the Second Empire decisively defeated. A Government of National Defense declared the Third Republic in Paris on September 4 and continued the war for another five months; the German forces fought and defeated new French armies in northern France. Following the Siege of Paris, the capital fell on January 28, 1871, and then a revolutionary uprising called the Paris Commune seized power in the capital and held it for two months until it was bloodily suppressed by the regular French army at the end of May 1871.

Bismarck acted immediately to secure the unification of Germany. He negotiated with representatives of the southern German states, offering special concessions if they agreed to unification. The negotiations succeeded; patriotic sentiment overwhelmed what opposition remained. While the war was in its final phase, Wilhelm I of Prussia was proclaimed German Emperor on January 18, 1871 in the Hall of Mirrors in the Château de Versailles. The new German Empire was a federation; each of its 25 constituent states (kingdoms, grand duchies, duchies, principalities, and free cities) retained some autonomy. The King of Prussia, as German Emperor, was not sovereign over the entirety of Germany; he was only primus inter pares, or first among equals.

Victory in the Franco-Prussian War proved the capstone of the nationalist issue. In the first half of the 1860s, Austria and Prussia both contended to speak for the German states; both maintained they could support German interests abroad and protect German interests at home. After the victory over Austria in 1866, Prussia began internally asserting its authority to speak for the German states and defend German interests, while Austria began directing more of its attention to possessions in the Balkans. The victory over France in 1871 expanded Prussian hegemony in the German states to the international level. With the proclamation of Wilhelm as Kaiser, Prussia assumed the leadership of the new empire. The southern states became officially incorporated into a unified Germany at the Treaty of Versailles of 1871 (signed February 26, 1871; later ratified in the Treaty of Frankfurt of May 10, 1871), which formally ended the war.

Under the Treaty of Frankfurt, France relinquished most of its traditionally German regions (Alsace and the German-speaking part of Lorraine); paid an indemnity, calculated (on the basis of population) as the precise equivalent of the indemnity that Napoleon Bonaparte imposed on Prussia in 1807; and accepted German administration of Paris and most of northern France, with “German troops to be withdrawn stage by stage with each installment of the indemnity payment.” 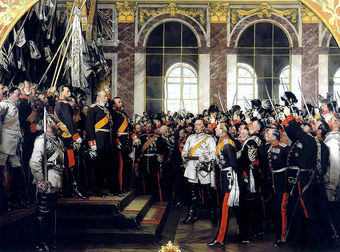