The German Revolutions of 1848

Growing discontent with the political and social order imposed by the Congress of Vienna led to the outbreak in 1848 of the March Revolution in the German states.

Frankfurt Assembly
The first freely elected parliament for all of Germany, elected on May 1, 1848. The session was held from May 18, 1848, to May 31, 1849, in the Paulskirche at Frankfurt am Main. Its existence was both part of and the result of the “March Revolution” in the states of the German Confederation. After long and controversial debates, the assembly produced the so-called Frankfurt Constitution.
Forty-Eighters
Europeans who participated in or supported the revolutions of 1848 that swept Europe. Disappointed at the failure of the revolution to bring about the reform of the system of government in Germany or the Austrian Empire and sometimes on the government’s wanted list because of their involvement in the revolution, they gave up their old lives to try again abroad. Many emigrated to the United States, England, and Australia after the revolutions failed.
Zollverein
A coalition of German states formed to manage tariffs and economic policies within their territories. It was the first instance in history in which independent states had consummated a full economic union without the simultaneous creation of a political federation or union.

The revolutions of 1848 in the German states, the opening phase of which was also called the March Revolution, were initially part of the Revolutions of 1848 that broke out in many European countries. They were a series of loosely coordinated protests and rebellions in the states of the German Confederation, including the Austrian Empire. The revolutions, which stressed pan-Germanism, demonstrated popular discontent with the traditional, largely autocratic political structure of the 39 independent states of the Confederation that inherited the German territory of the former Holy Roman Empire. They demonstrated the popular desire for the Zollverein movement.

The middle-class elements were committed to liberal principles while the working class sought radical improvements to their working and living conditions. As the middle class and working class components of the Revolution split, the conservative aristocracy defeated it. Liberals were forced into exile to escape political persecution, where they became known as Forty-Eighters. Many immigrated to the United States, settling from Wisconsin to Texas.

The groundwork of the 1848 uprising in Germany was laid long beforehand. The Hambacher Fest of 1832, for instance, reflected growing unrest in the face of heavy taxation and political censorship. The Hambacher Fest is noteworthy for the republicans adopting the black-red-gold colors (used on today’s national flag of Germany) as a symbol of the republican movement and of unity among the German-speaking people.

Activism for liberal reform spread through many of the German states, each of which had distinct revolutions. They were also inspired by street demonstrations of workers and artisans in Paris, France, from February 22-24, 1848, which resulted in the abdication by King Louis Philippe of France and his exile in Britain. In France the revolution of 1848 became known as the February Revolution.

The revolutions spread across Europe; they erupted in Austria and Germany, beginning with the large demonstrations on March 13, 1848, in Vienna. This resulted in the resignation of Prince von Metternich as chief minister to Emperor Ferdinand I of Austria, and his exile in Britain. Because of the date of the Vienna demonstrations, the revolutions in Germany are usually called the March Revolution.

Fearing the fate of Louis-Philippe of France, some monarchs in Germany accepted some of the demands of the revolutionaries, at least temporarily. In the south and west, large popular assemblies and mass demonstrations took place. They demanded freedom of the press, freedom of assembly, written constitutions, arming of the people, and a parliament.

In 1848, Austria was the predominant German state. It was considered the successor to the Holy Roman Empire, which had been dissolved by Napoleon in 1806, and was not resurrected by the Congress of Vienna in 1815. German Austrian chancellor Metternich had dominated Austrian politics from 1815 until 1848.

On March 13, 1848, university students mounted a large street demonstration in Vienna, and it was covered by the press across the German-speaking states. Following the important but relatively minor demonstrations against Lola Montez in Bavaria on February 9, 1848, the first major revolt of 1848 in German lands occurred in Vienna on March 13, 1848. The student demonstrators demanded a constitution and a constituent assembly elected by universal male suffrage.

Emperor Ferdinand and his chief adviser Metternich directed troops to crush the demonstration. When demonstrators moved to the streets near the palace, the troops fired on the students, killing several. The new working class of Vienna joined the student demonstrations, developing an armed insurrection. The Diet of Lower Austria demanded Metternich’s resignation. With no forces rallying to Metternich’s defense, Ferdinand reluctantly complied and dismissed him. The former chancellor went into exile in London.

In Prussia, in March 1848, crowds of people gathered in Berlin to present their demands in an “address to the king.” King Frederick William IV, taken by surprise, yielded verbally to all the demonstrators’ demands, including parliamentary elections, a constitution, and freedom of the press. He promised that “Prussia was to be merged forthwith into Germany.”

On March 13, the army charged people returning from a meeting in the Tiergarten; they left one person dead and many injured. On March 18, a large demonstration occurred; when two shots were fired, the people feared that some of the 20,000 soldiers would be used against them. They erected barricades, fighting started, and a battle took place until troops were ordered 13 hours later to retreat, leaving hundreds dead. Afterwards, Frederick William attempted to reassure the public that he would proceed with reorganizing his government. The king also approved arming the citizens.

Starting on May 18, 1848, the Frankfurt Assembly worked to find ways to unite the various German states and write a constitution. The Assembly was unable to pass resolutions and dissolved into endless debate. After long and controversial discussions, the assembly produced the so-called Frankfurt Constitution, which proclaimed a German Empire based on the principles of parliamentary democracy. This constitution fulfilled the main demands of the liberal and nationalist movements of the Vormärz and provided a foundation of basic rights, both of which stood in opposition to Metternich’s system of Restoration. The parliament also proposed a constitutional monarchy headed by a hereditary emperor (Kaiser).

Other uprising occurred in Baden, the Palatinate, Saxony, the Rhineland, and Bavaria. 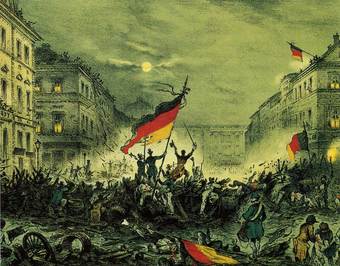 Revolutions of 1848 Origin of the Flag of Germany: Cheering revolutionaries in Berlin, on March 19, 1848.

Failures of the Revolutions

By late 1848, the Prussian aristocrats including Otto von Bismarck and generals had regained power in Berlin. They were not defeated permanently during the incidents of March, but had only retreated temporarily. General von Wrangel led the troops who recaptured Berlin for the old powers, and King Frederick William IV of Prussia immediately rejoined the old forces. In November, the king dissolved the new Prussian parliament and put forth a constitution of his own based upon the work of the assembly, yet maintaining the ultimate authority of the king.

The achievements of the revolutionaries of March 1848 were reversed in all of the German states and by 1851, the Basic Rights from the Frankfurt Assembly had also been abolished nearly everywhere. In the end, the revolution fizzled because of the divisions between the various factions in Frankfurt, the calculating caution of the liberals, the failure of the left to marshal popular support and the overwhelming superiority of the monarchist forces.

The Revolution of 1848 failed in its attempt to unify the German-speaking states because the Frankfurt Assembly reflected the many different interests of the German ruling classes. Its members were unable to form coalitions and push for specific goals. The first conflict arose over the goals of the assembly. The moderate liberals wanted to draft a constitution to present to the monarchs, whereas the smaller group of radical members wanted the assembly to declare itself as a law-giving parliament. They were unable to overcome this fundamental division, and did not take any definitive action toward unification or the introduction of democratic rules. The assembly declined into debate. While the French revolution drew on an existing nation state, the democratic and liberal forces in Germany of 1848 were confronted with the need to build a nation state and a constitutional at the same time, which overtaxed them.