Toward a German Identity

The surge of German nationalism, stimulated by the experience of Germans in the Napoleonic period, the development of a German cultural and artistic identity, and improved transportation through the region, moved Germany toward unification in the 19th century.

Johann Wolfgang von Goethe
A German writer and statesman. His body of work includes epic and lyric poetry written in a variety of meters and styles; prose and verse dramas; memoirs; an autobiography; literary and aesthetic criticism; treatises on botany, anatomy, and color; and four novels. In addition, numerous literary and scientific fragments, more than 10,000 letters, and nearly 3,000 drawings by him exist.
Burschenschaften
One of the traditional student fraternities of Germany. They were founded in the 19th century as associations of university students inspired by liberal and nationalistic ideas. They were significantly involved in the March Revolution and the unification of Germany.
Carlsbad Decrees
A set of reactionary restrictions introduced in the states of the German Confederation on September 20, 1819, after a conference held in the spa town of Carlsbad, Bohemia. They banned nationalist fraternities (“Burschenschaften”), removed liberal university professors, and expanded the censorship of the press. They were aimed to quell a growing sentiment for German unification.

The unification of Germany into a politically and administratively integrated nation state officially occurred on January 18, 1871, in the Hall of Mirrors at the Palace of Versailles in France. Princes of the German states gathered there to proclaim Wilhelm I of Prussia as German Emperor after the French capitulation in the Franco-Prussian War. Unofficially, the de facto transition of most of the German-speaking populations into a federated organization of states had been developing in fits and starts for some time through alliances formal and informal between princely rulers. Self-interests of the various parties hampered the process over nearly a century of autocratic experimentation beginning in the era of the Napoleonic Wars, which saw the dissolution of the Holy Roman Empire (1806) and subsequent rise of German nationalism.

Unification exposed tensions caused by religious, linguistic, social, and cultural differences among the inhabitants of the new nation, suggesting that 1871 only represented one moment in the larger unification process. Given the mountainous terrains of much of the territory, it was inevitable that isolated peoples would develop cultural, educational, linguistic, and religious differences over such a long period. Germany of the 19th century enjoyed transportation and communications improvements that began uniting people and culture.

The Holy Roman Empire of the German Nation, which included more than 500 independent states, was effectively dissolved when Emperor Francis II abdicated during the War of the Third Coalition in August 1806. Despite the legal, administrative, and political disruption associated with the end of the Empire, the people of the German-speaking areas of the old Empire had a common linguistic, cultural, and legal tradition further enhanced by their shared experience in the French Revolutionary Wars and Napoleonic Wars.

European liberalism offered an intellectual basis for unification by challenging dynastic and absolutist models of social and political organization; its German manifestation emphasized the importance of tradition, education, and linguistic unity of people in a geographic region. Economically, the creation of the Prussian Zollverein (customs union) in 1818 and its subsequent expansion to include other states of the German Confederation reduced competition between and within states. Emerging modes of transportation facilitated business and recreational travel, leading to contact and sometimes conflict among German speakers from throughout Central Europe.

In the late 18th century, the sense of a German cultural identity began to emerge. Before 1750, the German upper classes looked to France for intellectual, cultural, and architectural leadership; French was the language of high society. By the mid-18th century the “Aufklärung” (The Enlightenment) had transformed German high culture in music, philosophy, science, and literature. Christian Wolff (1679–1754) was the pioneer as a writer who expounded the Enlightenment to German readers; he legitimized German as a philosophic language.

Johann Gottfried von Herder (1744–1803) broke new ground in philosophy and poetry as a leader of the Sturm und Drang movement of proto-Romanticism. Weimar Classicism was a cultural and literary movement based in Weimar that sought to establish a new humanism by synthesizing Romantic, Classical, and Enlightenment ideas. The movement, from 1772 until 1805, involved Herder as well as polymath Johann Wolfgang von Goethe (1749–1832) and Friedrich Schiller (1759–1805), a poet and historian. Herder argued that every folk had its own particular identity expressed in its language and culture. This legitimized the promotion of German language and culture and helped shape the development of German nationalism. Schiller’s plays expressed the restless spirit of his generation, depicting the hero’s struggle against social pressures and the force of destiny.

Under the hegemony of the Napoleonic French Empire (1804–1814), popular German nationalism thrived in the reorganized German states. Due in part to the shared experience under French dominance, various justifications emerged to identify “Germany” as a single state. For the German philosopher Johann Gottlieb Fichte,

The first, original, and truly natural boundaries of states are beyond doubt their internal boundaries. Those who speak the same language are joined to each other by a multitude of invisible bonds by nature herself, long before any human art begins; they understand each other and have the power of continuing to make themselves understood more and more clearly; they belong together and are by nature one and an inseparable whole.

A common language may have been seen to serve as the basis of a nation, but as contemporary historians of 19th-century Germany noted, it took more than linguistic similarity to unify these several hundred polities. The experience of German-speaking Central Europe during the years of French hegemony contributed to a sense of common cause to remove the French invaders and reassert control over their own lands. The exigencies of Napoleon’s campaigns in Poland (1806–07), the Iberian Peninsula, western Germany, and his disastrous invasion of Russia in 1812 disillusioned many Germans, princes and peasants alike. Napoleon’s Continental System nearly ruined the Central European economy. The invasion of Russia included nearly 125,000 troops from German lands, and the loss of that army encouraged many Germans, both high- and low-born, to envision a Central Europe free of Napoleon’s influence.

The surge of German nationalism, stimulated by the experience of Germans in the Napoleonic period and initially allied with liberalism, shifted political, social, and cultural relationships within the German states during the beginning of the German Confederation. Figures like August Heinrich Hoffmann von Fallersleben, Ludwig Uhland, Georg Herwegh, Heinrich Heine, Georg Büchner, Ludwig Börne, and Bettina von Arnim rose in the Vormärz era. Father Friedrich Jahn’s gymnastic associations exposed middle-class German youth to nationalist and democratic ideas, which took the form of the nationalistic and liberal democratic college fraternities known as the Burschenschaften.

The Wartburg Festival in 1817 celebrated Martin Luther as a proto-German nationalist, linking Lutheranism to German nationalism, and helping arouse religious sentiments for the cause of German nationhood. The festival culminated in the burning of several books and other items that symbolized reactionary attitudes. One item was a book by August von Kotzebue, who was accused of spying for Russia in 1819 and then murdered by a theological student, Karl Ludwig Sand, who was executed for the crime. Sand belonged to a militant nationalist faction of the Burschenschaften. Metternich used the murder as a pretext to issue the Carlsbad Decrees of 1819, which dissolved the Burschenschaften, cracked down on the liberal press, and seriously restricted academic freedom.

Metternich was able to harness conservative outrage at the assassination to consolidate legislation that would further limit the press and constrain the rising liberal and nationalist movements. Consequently, these decrees drove the Burschenschaften underground, restricted the publication of nationalist materials, expanded censorship of the press and private correspondence, and limited academic speech by prohibiting university professors from encouraging nationalist discussion.

Other Factors for Unification

By the early 19th century, German roads had deteriorated to an appalling extent. Travelers both foreign and local complained bitterly about the state of the Heerstraßen, the military roads previously maintained for the ease of moving troops. As German states ceased to be a military crossroads, however, the roads improved; the length of hard-surfaced roads in Prussia increased from 3,800 kilometers (2,400 mi) in 1816 to 16,600 kilometers (10,300 mi) in 1852. By 1835, Heinrich von Gagern wrote that roads were the “veins and arteries of the body politic…” and predicted that they would promote freedom, independence, and prosperity. As people moved around, they came into contact with others on trains, at hotels, in restaurants, and for some, at fashionable resorts such as the spa in Baden-Baden. Water transportation also improved.

As important as these improvements were, they could not compete with the impact of the railway. Historians of the Second Empire later regarded the railways as the first indicator of a unified state; the patriotic novelist, Wilhelm Raabe, wrote: “The German empire was founded with the construction of the first railway…” Rail travel changed how cities looked and how people traveled. Its impact reached throughout the social order, affecting everyone from the highest-born to the lowest. Although some of the outlying German provinces were not serviced by rail until the 1890s, the majority of the population, manufacturing centers, and production centers were linked to the rail network by 1865.

As travel became easier, faster, and less expensive, Germans started to see unity in factors other than language. The Brothers Grimm, who compiled a massive dictionary known as The Grimm, also assembled a compendium of folk tales and fables that highlighted the storytelling parallels between different regions. Karl Baedeker wrote guidebooks to different cities and regions of Central Europe, indicating places to stay, sites to visit, and giving a short history of castles, battlefields, famous buildings, and famous people. His guides also included distances, roads to avoid, and hiking paths to follow.

The words of August Heinrich Hoffmann von Fallersleben expressed not only the linguistic unity of the German people but also their geographic unity. Patriotic songs as “Die Wacht am Rhein” (“The Watch on the Rhine”) by Max Schneckenburger began to focus attention on geographic space, not limiting “German-ness” to a common language. Schneckenburger wrote “The Watch on the Rhine” in a specific patriotic response to French assertions that the Rhine was France’s “natural” eastern boundary. 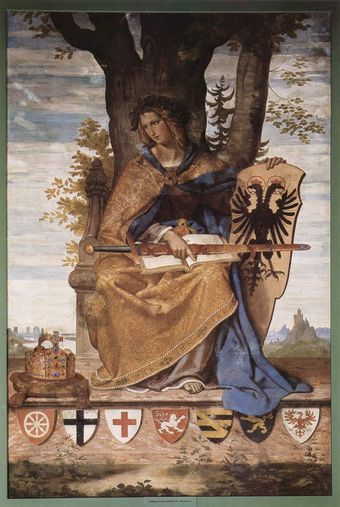 Germania Germania, a personification of the German nation, appears in Philipp Veit’s fresco (1834–36). She is holding a shield with the coat of arms of the German Confederation. The shields on which she stands are the arms of the seven traditional Electors of the Holy Roman Empire. She holds the “Reichsschwert” (imperial sword) and the Imperial Crown of the Holy Roman Empire sits at her side.