The Iranian Revolution refers to events involving the overthrow of the Pahlavi dynasty under Mohammad Reza Shah Pahlavi, who was supported by the United States, and its eventual replacement with an Islamic republic under the Grand Ayatollah Ruhollah Khomeini, the leader of the revolution, supported by various leftist and Islamist organizations and Iranian student movements.

Examine the reasons for the Iranian Revolution

Ayatollah Ruhollah Khomeini
An Iranian Shia Muslim religious leader, revolutionary, and politician. He was the founder of the Islamic Republic of Iran and the leader of the 1979 Iranian Revolution that saw the overthrow of the Pahlavi monarchy and Mohammad Reza Pahlavi, the Shah of Iran. Following the revolution, he became the country’s Supreme Leader, a position created in the constitution of the Islamic Republic as the highest-ranking political and religious authority of the nation, which he held until his death.
Gharbzadegi
A pejorative Persian term variously translated as “Westoxification,” “Westitis,” “Euromania,” or “Occidentosis.” It is used to refer to the loss of Iranian cultural identity through the adoption and imitation of Western models and Western criteria in education, the arts, and culture and the subsequent transformation of Iran into a passive market for Western goods and a pawn in Western geopolitics.
Islamic Jurists
Experts in fiqh, or Islamic jurisprudence and Islamic Law, the human understanding of the Sharia (believed by Muslims to represent divine law as revealed in the Quran and the Sunnah (the teachings and practices of the Islamic prophet Muhammad).

The Iranian Revolution, also known as the Islamic Revolution, was the revolution that transformed Iran from an absolute monarchy under Shah Mohammad Reza Pahlavi to an Islamic republic under Ayatollah Ruhollah Khomeini, one of the leaders of the revolution and founder of the Islamic Republic. It began in January 1978 with the first major demonstrations and concluded with the approval of the new theocratic Constitution—whereby Ayatollah Khomeini became Supreme Leader of the country—in December 1979.

Demonstrations against the Shah commenced in October 1977, developing into a campaign of civil resistance that included both secular and religious elements and intensified in January 1978. Between August and December 1978, strikes and demonstrations paralyzed the country. The Shah left Iran for exile on January 16, 1979, as the last Persian monarch, leaving his duties to a regency council and an opposition-based prime minister. Ayatollah Khomeini was invited back to Iran by the government, and returned to Tehran to a greeting by several million Iranians. The royal reign collapsed shortly after on February 11, when guerrillas and rebel troops overwhelmed troops loyal to the Shah in armed street fighting, bringing Khomeini to official power. Iran voted by national referendum to become an Islamic Republic on April 1, 1979, and approved a new theocratic-republican constitution whereby Khomeini became Supreme Leader of the country in December 1979.

The revolution was unusual for the surprise it created throughout the world: it lacked many of the customary causes of revolution (defeat at war, a financial crisis, peasant rebellion, or disgruntled military), occurred in a nation that was enjoying relative prosperity, produced profound change at great speed, was massively popular, resulted in the exile of many Iranians, and replaced a pro-Western semi-absolute monarchy with an anti-Western authoritarian theocracy based on the concept of Guardianship of the Islamic Jurists (or velayat-e faqih). It was a relatively non-violent revolution and helped to redefine modern revolutions although there was violence in its aftermath. 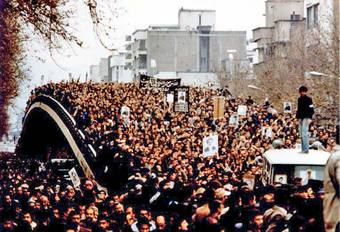 Iranian Revolution: The Shah, Mohammad Reza Pahlavi, left the country for exile in January 1979 after strikes and demonstrations paralyzed the country, and on February 1, 1979, Ayatollah Khomeini returned to Tehran to a greeting of several million Iranians.

Causes of the Revolution

Reasons advanced for the occurrence of the revolution and its populist, nationalist and, later, Shi’a Islamic character include a conservative backlash against the Westernizing and secularizing efforts of the Western-backed Shah, a liberal backlash to social injustice, a rise in expectations created by the 1973 oil revenue windfall and an overly ambitious economic program, anger over a short, sharp economic contraction in 1977–78, and other shortcomings of the previous regime.

The Shah’s regime became increasingly oppressive, brutal, corrupt, and extravagant. It also suffered from basic functional failures that brought economic bottlenecks, shortages, and inflation. The Shah was perceived by many as beholden to – if not a puppet of – a non-Muslim Western power (the United States) whose culture was affecting that of Iran. At the same time, support for the Shah may have waned among Western politicians and media – especially under the administration of U.S. President Jimmy Carter – as a result of the Shah’s support for OPEC petroleum price increases earlier in the decade. When President Carter enacted a policy that countries guilty of human rights violations would be deprived of American arms or aid, some Iranians gathered the courage to post open letters and petitions in the hope that the repression by the government might subside.

That the revolution replaced the monarchy of Mohammad Reza Shah Pahlavi with Islamism and Khomeini, rather than with another leader and ideology, is credited in part to the spread of the Shia version of the Islamic revival that opposed Westernization and saw Ayatollah Khomeini as following in the footsteps of the Shi’a Imam Husayn ibn Ali and the Shah in the role of Husayn’s foe, the hated tyrant Yazid I. Other factors include the underestimation of Khomeini’s Islamist movement by both the Shah’s reign – who considered them a minor threat compared to the Marxists and Islamic socialists – and by the secularist, opponents of the government, who thought the Khomeinists could be sidelined.

Ayatollah Khomeini and the Ideology of the Revolution

The post-revolutionary leader – Shia cleric Ayatollah Ruhollah Khomeini – first came to political prominence in 1963 when he led opposition to the Shah and his White Revolution. Khomeini was arrested in 1963 after declaring the Shah a “wretched miserable man” who had “embarked on the [path toward] destruction of Islam in Iran.” Three days of major riots throughout Iran followed, with 15,000 dead from police fire as reported by opposition sources. However, anti-revolutionary sources conjectured that just 32 were killed. Khomeini was released after eight months of house arrest and continued his agitation, condemning Iran’s close cooperation with Israel and its capitulations and extension of diplomatic immunity to American government personnel in Iran. In November 1964, Khomeini was rearrested and sent into exile where he remained for 15 years, until the revolution.

In this interim period of “disaffected calm,” the budding Iranian revival began to undermine the idea of Westernization as progress that had been the basis of the Shah’s secular reign and form the ideology of the 1979 revolution. Jalal Al-e-Ahmad’s idea of Gharbzadegi – that Western culture was a plague or an intoxication to be eliminated – spread through the nation, along with Ali Shariati’s vision of Islam as the one true liberator of the Third World from oppressive colonialism, neo-colonialism, and capitalism and Morteza Motahhari’s popularized retellings of the Shia faith.

Most importantly, Khomeini preached that revolt and especially martyrdom, against injustice and tyranny was part of Shia Islam, and that Muslims should reject the influence of both liberal capitalism and communism, ideas that inspired the revolutionary slogan “Neither East, nor West – Islamic Republic!”

Away from public view, Khomeini developed the ideology of velayat-e faqih (guardianship of the jurist) as government, that Muslims – in fact everyone – required “guardianship,” in the form of rule or supervision by the leading Islamic jurist or jurists. Such rule was ultimately “more necessary even than prayer and fasting” in Islam, as it would protect Islam from deviation from traditional sharia law and in so doing eliminate poverty, injustice, and the “plundering” of Muslim land by foreign non-believers. 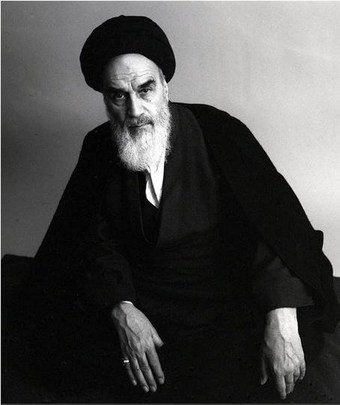 Ayatollah Khomeini: The post-revolutionary leader – Shia cleric Ayatollah Ruhollah Khomeini – first came to political prominence in 1963 when he led opposition to the Shah and his White Revolution. After the revolution, Khomeini told questioners that “the religious dignitaries do not want to rule.”