The Islamic Republic of Iran

After the 1979 Iranian Revolution, the Shah’s pro-Western, autocratic monarchy was replaced by an Islamic Republic based on the principle of rule by Islamic jurists, which reversed most of the modernization and secularization of the prior regime.

Compare the Islamic Republic with the government under the Shah

Iran hostage crisis
A diplomatic standoff between Iran and the United States in which 52 American diplomats and citizens were held hostage for 444 days from November 4, 1979, to January 20, 1981, after a group of Iranian students belonging to the Muslim Student Followers of the Imam’s Line, who supported the Iranian Revolution, took over the U.S. Embassy in Tehran. It is the longest hostage crisis in recorded history.
Islamic Republic
The name given to several states in countries ruled by Islamic laws. Despite the similar name, their governments and laws substantially differ. The term “Islamic republic” has come to mean several different things, some contradictory. To some Muslim religious leaders in the Middle East and Africa who advocate it, this type of state is under a particular Islamic form of government. They see it as a compromise between a purely Islamic caliphate and secular nationalism and republicanism. In their conception, the penal code of the state must be compatible with some or all laws of Sharia, and the state may not be a monarchy as many Middle Eastern states are presently.
theocratic
A form of government in which a deity is the source from which all authority derives. The civil leader is believed to have a personal connection with the civilization’s religion or belief.

Impact and Aftermath of the Revolution

One of the most dramatic changes in government in Iran’s history was seen with the 1979 Iranian Revolution in which Shah Mohammad Reza Pahlavi was overthrown and replaced by Ayatollah Ruhollah Khomeini. Autocratic monarchy was replaced by an Islamic Republic based on the principle of rule by Islamic jurists, (or “Velayat-e faqih”), where clerics serve as head of state and in many powerful governmental roles. A pro-Western, pro-American foreign policy was exchanged for one of “neither east nor west,” but rather radically Islamist. A rapidly modernizing, capitalist economy was replaced by populist economy and Islamic culture.

The initial impact of the Islamic revolution around the world was tremendous. In the non-Muslim world it has changed the image of Islam, generating much interest in its politics and spirituality of Islam along with fear and mistrust. In the Mideast and Muslim world, particularly in its early years, it triggered enormous enthusiasm and redoubled opposition to western intervention and influence. Islamist insurgents rose in Saudi Arabia (the 1979 week-long takeover of the Grand Mosque), Egypt (the 1981 machine-gunning of the Egyptian President Sadat), Syria (the Muslim Brotherhood rebellion in Hama), and Lebanon (the 1983 bombing of the American Embassy and French and American peace-keeping troops).

The immediate nationwide uprisings against the new government began by the 1979 Kurdish rebellion with the Khuzestan uprisings, along with the uprisings in Sistan and Baluchestan Province and other areas. Over the next several years, these were violently subdued by the new Islamic government. The new government began purging itself of non-Islamist political opposition, as well as of those Islamists who were not considered radical enough. Although both nationalists and Marxists initially joined with Islamists to overthrow the Shah, tens of thousands were executed by the new regime afterward.

On November 4, 1979, a group of Muslim students seized the United States Embassy and took 52 personnel and citizens hostage after the United States refused to return Mohammad Reza Pahlavi to Iran to face trial in the court of the new regime and all but certain execution. This 444-day event was known as the Iran hostage crisis. Attempts by the Jimmy Carter administration to negotiate for the release of the hostages, and a failed rescue attempt, helped force Carter out of office and brought Ronald Reagan to power. On Jimmy Carter’s final day in office, the last hostages were finally set free as a result of the Algiers Accords. 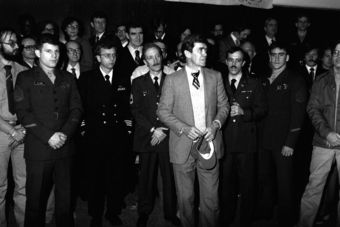 Iran Hostage Crisis: A group photograph of the fifty-two U.S. hostages in a hospital where they spent a few days after their release. The hostages were released after 444 days of detention in Tehran.

The Cultural Revolution began in 1980 with a three-year closure of universities for inspection and cleanup in the cultural policy of the education and training system.

The Islamic revolutionary regime of Ayatollah Khomeini dramatically reversed the pro-Western foreign policy of the regime it overthrew. Since then, Iran has oscillated between the two opposing tendencies of revolutionary ardor (promoting the Islamic revolution and struggling against non-Muslim tendencies abroad) and moves towards pragmatism (economic development and normalization of foreign relations). Khomeini’s 1989 fatwa call for the killing of British citizen Salman Rushdie for his allegedly blasphemous book, The Satanic Verses, demonstrated the willingness of the Islamic revolutionaries to sacrifice trade and other ties with western countries to threaten an individual citizen living thousands of miles away.

On the other hand, Khomeini’s death in 1989 led to more pragmatic policies, with Presidents Hashemi Rafsanjani and Mohammad Khatami leading the charge for stable relations with the west and its own non-Revolutionary-Islamic neighbors such asSaudi Arabia. Following the 2005 election of President Mahmoud Ahmedinejad, Iran has returned to more a more hardline stance, frequently antagonizing the west and its neighbors while battling for control over the region.

While the revolution brought about some re-Islamization of Iran, particularly in terms of personal appearance—beards, hijab—it has not prompted a total reversal modernization or a return to traditional patterns of family life, such as polygamy and the extended family with numerous children). Despite the lowering of the legal age of marriage for women to 9 and the Ayatollah Khomeini’s support for early marriage for females, the actual average age of marriage for women rose to 22 by 1996.

The political system of the Islamic Republic is based on the 1979 Constitution and comprises several intricately connected governing bodies. The Leader of the Revolution (“Supreme Leader”) is responsible for delineation and supervision of the general policies of the Islamic Republic of Iran. He is Commander-in-Chief of the armed forces, controls the military intelligence and security operations, and has sole power to declare war or peace. The heads of the judiciary, state radio and television networks, the commanders of the police and military forces, and six of the twelve members of the Guardian Council are appointed by the Supreme Leader. The Assembly of Experts elects and dismisses the Supreme Leader on the basis of qualifications and popular esteem.

After the Supreme Leader, the Constitution defines the President of Iran as the highest state authority. The President is elected by universal suffrage for a term of four years and can only be re-elected for one term. Presidential candidates must be approved by the Guardian Council before running to ensure their allegiance to the ideals of the Islamic Revolution. The President is responsible for the implementation of the Constitution and the exercise of executive powers, except for matters directly related to the Supreme Leader.

While the revolution did not dismantle the Pahlavi judiciary in its entirety, it replaced, according to historian Ervand Abrahamian, secular-trained jurists “with seminary-educated ones, and codified more features of the sharia into state laws – especially the Law of Retribution.” Women judges were also removed. Between 1979 and 1982, the entire pre-Revolutionary judiciary was purged, and their duties replaced by “Revolutionary Tribunals” set up in every town. These tribunals ruled on “Islamic law,” but were in practice unfair and biased, with inexperienced and often incompetent judges. Many people were executed or given harsh punishments for both political and criminal acts. There were no appeals, and trials often lasted just minutes. In 1982, the regular court system was reinstated, but with the judges now trained in Islamic law.