On September 22, 1980, the Iraqi army invaded the Iranian Khuzestan and the Iran–Iraq War began. This conflict is often compared to World War I for its similar fighting tactics and brutality.

Analyze the reasons for the Iran-Iraq War

weapons of mass destruction
Nuclear, radiological, chemical, biological or other weapons that can kill and bring significant harm to a large number of humans or cause great damage to human-made structures (e.g. buildings), natural structures (e.g. mountains), or the biosphere. The scope and usage of the term has evolved and been disputed, often signifying more politically than technically. It was originally coined in reference to aerial bombing with chemical explosives.
Kurds
An ethnic group in the Middle East, mostly inhabiting a contiguous area spanning adjacent parts of eastern and southeastern Turkey (Northern Kurdistan), western Iran (Eastern or Iranian Kurdistan), northern Iraq (Southern or Iraqi Kurdistan), and northern Syria (Western Kurdistan or Rojava). They are culturally and linguistically closely related to the Iranian peoples and are thus often classified as Iranian.
sulfur mustard
Commonly known as mustard gas, this cytotoxic and vesicant chemical warfare agent forms large blisters on exposed skin and in the lungs.

The Iran–Iraq War was an armed conflict between Iran and Iraq lasting from September 22, 1980, when Iraq invaded Iran, to August 1988. The war followed a long history of border disputes and was motivated by fears that the Iranian Revolution in 1979 would inspire insurgency among Iraq’s long-suppressed Shi’i majority, as well as Iraq’s desire to replace Iran as the dominant Persian Gulf state.

Although Iraq hoped to take advantage of Iran’s revolutionary chaos and attacked without formal warning, it made only limited progress into Iran and was quickly repelled. Iran regained virtually all lost territory by June 1982. For the next six years, Iran was on the offensive. A number of proxy forces participated in the war, most notably the Iranian People’s Mujahedin of Iran siding with Ba’athist Iraq and Iraqi Kurdish militias of the Kurdistan Democratic Party and Patriotic Union of Kurdistan siding with Iran—all suffering a major blow by the end of the conflict.

Despite United Nations Security Council calls for a ceasefire, hostilities continued until August 20, 1988. The war finally ended with United Nations Security Council Resolution 598, a UN-brokered ceasefire accepted by both sides. At the war’s conclusion, it took several weeks for the Armed Forces of the Islamic Republic of Iran to evacuate Iraqi territory and honor prewar international borders set by the 1975 Algiers Agreement. The last prisoners of war were exchanged in 2003.

The war cost both sides in lives and economic damage: about half a million Iraqi and Iranian soldiers and an equivalent number of civilians died, with many more injured; however, the war brought neither reparations nor changes in borders. The conflict has been compared to World War I in terms of the tactics used, including large-scale trench warfare with barbed wire stretched across trenches, manned machine gun posts, bayonet charges, human wave attacks across a no man’s land, and extensive use of chemical weapons such as sulfur mustard by the Iraqi government against Iranian troops, civilians, and Kurds. The world powers United States and the Soviet Union, together with many Western and Arab countries, provided military, intelligence, economic, and political support for Iraq.

At the time of the conflict, the United Nations Security Council issued statements that “chemical weapons had been used in the war.” UN statements never clarified that only Iraq was using chemical weapons, and according to retrospective authors “the international community remained silent as Iraq used weapons of mass destruction against Iranian[s] as well as Iraqi Kurds.” The Security Council did not identify Iraq as the aggressor of the war until December 11, 1991, 12 years after Iraq invaded Iran and 16 months after Iraq’s invasion of Kuwait. 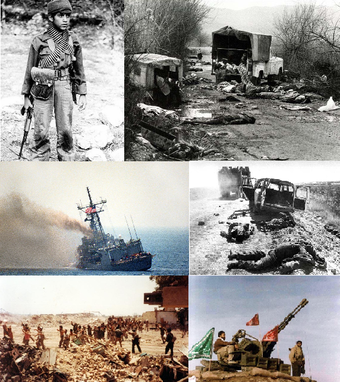 Iran-Iraq War: Participation of child soldiers on Iranian front (top left); Bodies of Iranian civilians killed in the Iraqi invasion (top right); Port quarter view of USS Stark listing to port after being mistakenly struck by an Iraqi warplane (middle left); Pro-Iraq PMOI forces killed in Operation Mersad (middle right); Iraqi prisoners of war after the re-capture of Khorramshahr by Iranians (below left); ZU-23-2 being used by the Iranian Army (below right).

A photo collage of the Iran-Iraq War. Participation of child soldiers on Iranian front (top left); Bodies of Iranian civilians killed in the Iraqi invasion (top right); Port quarter view of USS Stark listing to port after being mistakenly struck by an Iraqi warplane (middle left); Pro-Iraq PMOI forces killed in Operation Mersad (middle right); Iraqi prisoners of war after the re-capture of Khorramshahr by Iranians (below left); ZU-23-2 being used by the Iranian Army (below right).

Since the Ottoman–Persian Wars of the 16th and 17th centuries, Iran (known as “Persia” prior to 1935) and the Ottomans fought over Iraq (then known as Mesopotamia) and full control of the Shatt al-Arab until the signing of the Treaty of Zuhab in 1639, which established the final borders between the two countries. The Shatt al-Arab was considered an important channel for both states’ oil exports, and in 1937, Iran and the newly independent Iraq signed a treaty to settle the dispute. In the same year, Iran and Iraq both joined the Treaty of Saadabad, and relations between the two states remained good for decades afterwards.

In April 1969, Iran abrogated the 1937 treaty over the Shatt al-Arab river, and as such ceased paying tolls to Iraq when its ships used the waterway. The Shah justified his move by arguing that almost all river borders around the world ran along the thalweg and claiming that because most of the ships that used the waterway were Iranian, the 1937 treaty was unfair to Iran. Iraq threatened war over the Iranian move, but when on April 24 1969, an Iranian tanker escorted by Iranian warships sailed down the river, Iraq—the militarily weaker state—did nothing. Iran’s abrogation of the treaty marked the beginning of a period of acute Iraqi-Iranian tension that was to last until the 1975 Algiers Agreement.

In the 1975 Algiers Agreement, Iraq made territorial concessions—including the Shatt al-Arab waterway—in exchange for normalized relations. In return for Iraq recognizing that the frontier on the waterway ran along the entire thalweg, Iran ended its support of Iraq’s Kurdish guerrillas. Iraqis viewed the Algiers Agreement as humiliating.

Tensions between Iraq and Iran were fueled by Iran’s Islamic revolution and its appearance of being a Pan-Islamic force in contrast to Iraq’s Arab nationalism. Despite Iraq’s goals of regaining the Shatt al-Arab, the Iraqi government seemed to initially welcome Iran’s Revolution, which overthrew Iran’s Shah, seen as a common enemy. It is difficult to pinpoint when tensions began to build.

Ayatollah Ruhollah Khomeini called on Iraqis to overthrow the Ba’ath government, which was received with considerable anger in Baghdad. On July 17, 1979, despite Khomeini’s call, Saddam gave a speech praising the Iranian Revolution and called for an Iraqi-Iranian friendship based on non-interference in each other’s internal affairs. When Khomeini rejected Saddam’s overture by calling for Islamic revolution in Iraq, Saddam was alarmed. Iran’s new Islamic administration was regarded in Baghdad as an irrational, existential threat to the Ba’ath government, especially because the secular Ba’ath party discriminated against and posed a threat to the Shia movement in Iraq, whose clerics were Iran’s allies within Iraq and whom Khomeini saw as oppressed.

Saddam’s primary interest in war may have also stemmed from his desire to right the supposed “wrong” of the Algiers Agreement, in addition to finally achieving his desire of annexing Khuzestan and becoming the regional superpower. Saddam’s goal was to replace Egypt as the “leader of the Arab world” and achieve hegemony over the Persian Gulf. He saw Iran’s increased weakness due to revolution, sanctions, and international isolation.

A successful invasion of Iran would enlarge its petroleum reserves and make it the region’s dominant power. With Iran engulfed in chaos, an opportunity for Iraq to annex the oil-rich Khuzestan Province materialized. In addition, Khuzestan’s large ethnic Arab population would allow Saddam to pose as a liberator for Arabs from Persian rule. Fellow Gulf states such as Saudi Arabia and Kuwait (despite being hostile to Iraq) encouraged Iraq to attack, as they feared that an Islamic revolution would take place within their own borders.