One of the most significant impacts of the U.S. policy of containment was the outbreak of the Korean War, when the U.S. came to aid of South Korea against the communist North Korea.

cult of personality
When an individual uses mass media, propaganda, or other methods to create an idealized, heroic, and at times worshipful image, often through unquestioning flattery and praise.
war of attrition
A military strategy in which a belligerent attempts to win a war by wearing down the enemy to the point of collapse through continuous losses in personnel and material.
proxy war
A conflict between two states or non-state actors in which neither entity directly engages the other. While this can encompass a breadth of armed confrontation, its core definition hinges on two separate powers utilizing external strife to somehow attack the interests or territorial holdings of the other. This frequently involves both countries fighting their opponent’s allies or assisting their allies in fighting their opponent.

In June 1950, Kim Il-sung’s North Korean People’s Army invaded South Korea. Joseph Stalin “planned, prepared, and initiated” the invasion, creating “detailed [war] plans” that were communicated to the North Koreans. To Stalin’s surprise, the UN Security Council backed the defense of South Korea. Fearing that communist Korea under a Kim Il Sung dictatorship could threaten Japan and foster other communist movements in Asia, Truman committed U.S. forces and obtained help from the United Nations to counter the North Korean invasion. The Soviets boycotted UN Security Council meetings while protesting the Council’s failure to seat the People’s Republic of China and thus did not veto the Council’s approval of UN action to oppose the North Korean invasion. A joint UN force of personnel from South Korea, the United States, Britain, Turkey, Canada, Australia, France, the Philippines, the Netherlands, Belgium, New Zealand, and other countries joined to stop the invasion.

After the first two months of the conflict, South Korean forces were on the point of defeat, forced back to the Pusan Perimeter. In September 1950, an amphibious UN counter-offensive was launched at Inchon and cut off many of the North Korean troops. Those that escaped envelopment and capture were rapidly forced back north all the way to the border with China at the Yalu River or into the mountainous interior. At this point, in October 1950, Chinese forces crossed the Yalu and entered the war. Chinese intervention triggered a retreat of UN forces that continued until mid-1951.

After these reversals of fortune, which saw Seoul change hands four times, the last two years of conflict became a war of attrition, with the front line close to the 38th parallel. The war in the air, however, was never a stalemate. North Korea was subject to a massive bombing campaign. Jet fighters confronted each other in air-to-air combat for the first time in history, and Soviet pilots covertly flew in defense of their communist allies.

The fighting ended on July 27, 1953, when an armistice was signed. The agreement created the Korean Demilitarized Zone to separate North and South Korea and allowed the return of prisoners. In North Korea, Kim Il-sung created a highly centralized and brutal dictatorship, according himself unlimited power and generating a formidable cult of personality. However, no peace treaty has been signed, and the two Koreas are technically still at war. Periodic clashes, many of which are deadly, have continued to the present.

The Korean War is seen as one of the most significant impacts of the containment policy of the U.S. government, aimed at preventing the spread of communism, and was one of the major proxy wars of the Cold War.

Korea was ruled by Japan from 1910 until the closing days of World War II. In August 1945, the Soviet Union declared war on Japan as a result of an agreement with the United States and liberated Korea north of the 38th parallel. U.S. forces subsequently moved into the south. By 1948, as a product of the Cold War between the Soviet Union and the United States, Korea was split into two regions with separate governments. Both governments claimed to be the legitimate government of Korea and neither side accepted the border as permanent. The civil war escalated into open warfare when North Korean forces—supported by the Soviet Union and China—moved to the south to unite the country on June 25, 1950.

In early 1950, the United States made its first commitment to form a peace treaty with Japan that would guarantee long-term U.S. military bases. Some observers (including George Kennan) believed that the Japanese treaty led Stalin to approve a plan to invade U.S.-supported South Korea on June 25, 1950.

In the Context of the Cold War

Among other effects, the Korean War galvanized NATO to develop a military structure. Public opinion in countries involved, such as Great Britain, was divided for and against the war. Many feared an escalation into a general war with Communist China and even nuclear war. The strong opposition to the war often strained Anglo-American relations. For these reasons, British officials sought a speedy end to the conflict, hoping to unite Korea under United Nations auspices and withdrawal of all foreign forces.

The war was a political disaster for the Soviet Union. Its central objective, the unification of the Korean peninsula under the Kim Il-Sung regime, was not achieved. Boundaries of both parts of Korea remained practically unchanged. Relations with communist ally China were seriously and permanently spoiled, leading to the Sino-Soviet split that lasted until the collapse of the Soviet Union in 1991.

The United States’ strong resistance to the invasion may have prevented a Soviet intervention in Yugoslavia during the Tito-Stalin split. The war, meanwhile, united the countries within the capitalist bloc: the Korean War accelerated the conclusion of a peace agreement between the U.S. and Japan, the warming of West Germany’s relations with other western countries, and creation of military and political blocs ANZUS (1951) and SEATO (1954). However, because of the war, the authority of the Soviets grew, evident in their readiness to interfere in developing countries of the Third World, many of which went down the socialist path of development after the Korean War after selecting the Soviet Union as their patron.

The U.S. entered the Korean War to defend South Korea from a communist invasion. However, the success of the Inchon landing inspired the U.S. and the United Nations to adopt a rollback strategy to overthrow the Communist North Korean regime, thus allowing nationwide elections under U.N. auspices. General Douglas MacArthur advanced across the 38th parallel into North Korea. The Chinese sent in a large army and defeated the U.N. forces, pushing them below the 38th parallel. Although the Chinese had been planning to intervene for months, this action was interpreted by Truman’s supporters as a response to U.S. forces crossing the 38th parallel. This interpretation allowed the episode to confirm the wisdom of containment doctrine as opposed to rollback. The Communists were later pushed back to around the original border. Truman blamed MacArthur’s focus on victory and adopted a “limited war” policy. His focus shifted to negotiating a settlement,finally reached in 1953. For his part, MacArthur denounced Truman’s “no-win policy.” 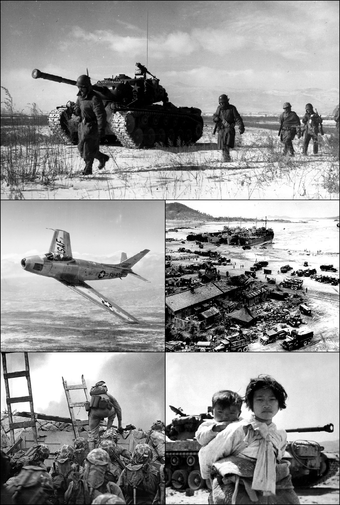