The Building of the Berlin Wall

The Berlin Wall was a barrier that divided Germany from 1961 to 1989, aimed at preventing East Germans from fleeing to stop economically disastrous migration of workers.

Checkpoint Charlie
The name given by the Western Allies to the best-known Berlin Wall crossing point between East Berlin and West Berlin during the Cold War.
Inner German border
The border between the German Democratic Republic (GDR, East Germany) and the Federal Republic of Germany (FRG, West Germany) from 1949 to 1990. Not including the similar but physically separate Berlin Wall, the border was 866 miles long and ran from the Baltic Sea to Czechoslovakia.
German Democratic Republic
A state in the Eastern Bloc during the Cold War period. From 1949 to 1990, it administered the region of Germany occupied by Soviet forces at the end of World War II.

The Berlin Wall  was a barrier that divided Germany from 1961 to 1989. Constructed by the German Democratic Republic (GDR, East Germany) starting on August 13, 1961, the Wall completely cut off West Berlin from surrounding East Germany and from East Berlin until government officials opened it in November 1989. Its demolition officially began on June 13, 1990 and was completed in 1992. The barrier included guard towers placed along large concrete walls, which circumscribed a wide area (later known as the “death strip”) that contained anti-vehicle trenches, “fakir beds,” and other defenses. The Eastern Bloc claimed that the Wall was erected to protect its population from fascist elements conspiring to prevent the “will of the people” in building a socialist state in East Germany. In practice, the Wall prevented the massive emigration and defection that had marked East Germany and the communist Eastern Bloc during the post-World War II period.

The Berlin Wall was officially referred to as the “Anti-Fascist Protective Wall” by GDR authorities, implying that the NATO countries and West Germany in particular were considered “fascists” by GDR propaganda. The West Berlin city government sometimes referred to it as the “Wall of Shame”—a term coined by mayor Willy Brandt—while condemning the Wall’s restriction on freedom of movement. Along with the separate and much longer Inner German border (IGB), which demarcated the border between East and West Germany, it came to symbolize a physical marker of the “Iron Curtain” that separated Western Europe and the Eastern Bloc during the Cold War.

Before the Wall’s erection, 3.5 million East Germans circumvented Eastern Bloc emigration restrictions and defected from the GDR, many by crossing over the border from East Berlin into West Berlin. From there, they could travel to West Germany and other Western European countries. Between 1961 and 1989, the Wall prevented almost all such emigration. During this period, around 5,000 people attempted to escape over the Wall, with an estimated death toll ranging from 136 to more than 200 in and around Berlin. 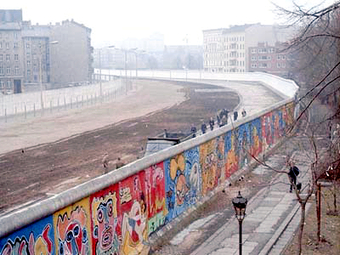 Berlin Wall: Photograph of the Berlin Wall taken from the West side. The Wall was built in 1961 to prevent East Germans from fleeing and stop an economically disastrous migration of workers. It was a symbol of the Cold War, and its fall in 1989 marked the approaching end of the war.

Effects of the Berlin Wall

With the closing of the East-West sector boundary in Berlin, the vast majority of East Germans could no longer travel or emigrate to West Germany. Berlin soon went from the easiest place to make an unauthorized crossing between East and West Germany to the most difficult. Many families were split, and East Berliners employed in the West were cut off from their jobs. West Berlin became an isolated exclave in a hostile land. West Berliners demonstrated against the Wall, led by their Mayor Willy Brandt, who strongly criticized the United States for failing to respond. Allied intelligence agencies had hypothesized about a wall to stop the flood of refugees, but the main candidate for its location was around the perimeter of the city. In 1961, Secretary of State Dean Rusk proclaimed, “The Wall certainly ought not to be a permanent feature of the European landscape. I see no reason why the Soviet Union should think it is … to their advantage in any way to leave there that monument to communist failure.”

United States and UK sources expected the Soviet sector to be sealed off from West Berlin, but were surprised how long they took to do so. They considered the Wall an end to concerns about a GDR/Soviet retaking or capture of the whole of Berlin; the Wall would presumably have been an unnecessary project if such plans were afloat. Thus, they concluded that the possibility of a Soviet military conflict over Berlin had decreased.

The East German government claimed that the Wall was an “anti-fascist protective rampart” intended to dissuade aggression from the West. Another official justification was the activities of Western agents in Eastern Europe. The Eastern German government also claimed that West Berliners were buying state-subsidized goods in East Berlin. East Germans and others greeted such statements with skepticism, as most of the time the border was closed for citizens of East Germany traveling to the West but not for residents of West Berlin travelling East. The construction of the Wall caused considerable hardship to families divided by it. Most people believed that the Wall was mainly a means of preventing the citizens of East Germany from entering or fleeing to West Berlin.

During the years of the Wall, around 5,000 people successfully defected to West Berlin. The number of people who died trying to cross the Wall or as a result of the Wall’s existence has been disputed. The most vocal claims by Alexandra Hildebrandt, Director of the Checkpoint Charlie Museum and widow of the Museum’s founder, estimated the death toll to be well above 200.

The East German government issued shooting orders to border guards dealing with defectors, though these are not the same as “shoot to kill” orders. GDR officials denied issuing the latter. In an October 1973 order later discovered by researchers, guards were instructed that people attempting to cross the Wall were criminals and needed to be shot: “Do not hesitate to use your firearm, not even when the border is breached in the company of women and children, which is a tactic the traitors have often used.”

Early successful escapes involved people jumping the initial barbed wire or leaping out of apartment windows along the line, but these ended as the Wall was fortified. East German authorities no longer permitted apartments near the Wall to be occupied, and any building near the Wall had its windows boarded and later bricked up. On August 15, 1961, Conrad Schumann was the first East German border guard to escape by jumping the barbed wire to West Berlin.

On 22 August 1961, Ida Siekmann was the first casualty at the Berlin Wall: she died after she jumped out of her third floor apartment at 48 Bernauer Strasse. The first person to be shot and killed while trying to cross to West Berlin was Günter Litfin, a 24-year-old tailor. He attempted to swim across the Spree Canal to West Germany on August 24, 1961, the same day that East German police received shoot-to-kill orders to prevent anyone from escaping.

East Germans successfully defected by a variety of methods: digging long tunnels under the Wall, waiting for favorable winds and taking a hot air balloon, sliding along aerial wires, flying ultralights and, in one instance, simply driving a sports car at full speed through the basic initial fortifications. When a metal beam was placed at checkpoints to prevent this kind of defection, up to four people (two in the front seats and possibly two in the boot) drove under the bar in a sports car that had been modified to allow the roof and windscreen to come away when it made contact with the beam. They lay flat and kept driving forward. The East Germans then built zig-zagging roads at checkpoints.