The Cuban Missile Crisis, when the U.S. Navy set up a blockade to halt Soviet nuclear weapons on their way to Cuba, brought the world closer to nuclear war than ever before.

Assess the severity of the Cuban Missile Crisis

Bay of Pigs Invasion
A failed military invasion of Cuba undertaken by the CIA-sponsored paramilitary group Brigade 2506 on April 17, 1961.
Fidel Castro
A Cuban politician and revolutionary who governed the Republic of Cuba as Prime Minister from 1959 to 1976 and then as President from 1976 to 2008. Politically a Marxist-Leninist and Cuban nationalist, he also served as the First Secretary of the Communist Party of Cuba from 1961 until 2011. Under his administration Cuba became a one-party communist state; industry and business were nationalized and state socialist reforms implemented throughout society.
Moscow–Washington hotline
A system that allows direct communication between the leaders of the United States and the USSR, established in 1963 after the Cuban Missile Crisis to prevent another dangerous confrontation.

In response to the failed Bay of Pigs Invasion of 1961 and the presence of American Jupiter ballistic missiles in Italy and Turkey, Soviet leader Nikita Khrushchev decided to agree to Cuba’s request to place nuclear missiles in Cuba to deter future harassment of Cuba. An agreement was reached during a secret meeting between Khrushchev and Fidel Castro in July 1962 and construction of a number of missile launch facilities started later that summer.

The 1962 midterm elections were underway in the U.S. and the White House had denied charges that it was ignoring dangerous Soviet missiles 90 miles from Florida. These missile preparations were confirmed when an Air Force U-2 spy plane produced clear photographic evidence of medium-range (SS-4) and intermediate-range (R-14) ballistic missile facilities. The United States established a military blockade to prevent further missiles from entering Cuba. It announced that they would not permit offensive weapons to be delivered to Cuba and demanded that the weapons already in Cuba be dismantled and returned to the USSR.

After a long period of tense negotiations, an agreement was reached between President John F. Kennedy and Khrushchev on October 27. Publicly, the Soviets would dismantle their offensive weapons in Cuba and return them to the Soviet Union, subject to United Nations verification, in exchange for a U.S. public declaration and agreement never to invade Cuba without direct provocation. Secretly, the United States agreed that it would dismantle all U.S.-built Jupiter MRBMs, which were deployed in Turkey and Italy against the Soviet Union unbeknownst to the public.

When all offensive missiles and Ilyushin Il-28 light bombers were withdrawn from Cuba, the blockade was formally ended on November 20, 1962. The negotiations between the United States and the Soviet Union pointed out the necessity of a quick, clear, and direct communication line between Washington and Moscow. As a result, the Moscow–Washington hotline was established. A series of agreements sharply reduced U.S.–Soviet tensions during the following years.

The United States was concerned about an expansion of Communism, and a Latin American country allying openly with the USSR was regarded as unacceptable given the U.S.-Soviet enmity since the end of World War II. Such an involvement would also directly defy the Monroe Doctrine, a U.S. policy which, while limiting the United States’ involvement in European colonies and European affairs, held that European powers ought not to have involvement with states in the Western Hemisphere.

The United States had been embarrassed publicly by the failed Bay of Pigs Invasion in April 1961, launched under President John F. Kennedy by CIA-trained forces of Cuban exiles. Afterward, former President Eisenhower told Kennedy that “the failure of the Bay of Pigs will embolden the Soviets to do something that they would otherwise not do.” The half-hearted invasion left Soviet premier Nikita Khrushchev and his advisers with the impression that Kennedy was indecisive and, as one Soviet adviser wrote, “too young, intellectual, not prepared well for decision making in crisis situations … too intelligent and too weak.” U.S. covert operations continued in 1961 with the unsuccessful Operation Mongoose.

In May 1962, Soviet Premier Nikita Khrushchev was persuaded to counter the United States’ growing lead in developing and deploying strategic missiles by placing Soviet intermediate-range nuclear missiles in Cuba, despite the misgivings of the Soviet Ambassador in Havana, Alexandr Ivanovich Alexeyev, who argued that Castro would not accept the deployment of these missiles. Khrushchev faced a strategic situation where the U.S. was perceived to have a “splendid first strike” capability that put the Soviet Union at a huge disadvantage.

Khrushchev also wanted to bring West Berlin—the American/British/French-controlled democratic enclave within Communist East Germany—into the Soviet orbit. The East Germans and Soviets considered western control over a portion of Berlin a grave threat to East Germany. For this reason among others, Khrushchev made West Berlin the central battlefield of the Cold War. Khrushchev believed that if the U.S. did nothing over the missile deployments in Cuba, he could muscle the West out of Berlin using said missiles as a deterrent to western counter-measures in Berlin. If the U.S. tried to bargain with the Soviets after becoming aware of the missiles, Khrushchev could demand trading the missiles for West Berlin. Since Berlin was strategically more important than Cuba, the trade would be a win for Khrushchev.

Khrushchev was also reacting in part to the nuclear threat of obsolescent Jupiter intermediate-range ballistic missiles that the U.S. installed in Turkey in April 1962.

Kennedy met with members of Executive Committee of the National Security Council (EXCOMM) and other top advisers on October 21, considering two remaining options after ruling out diplomacy with the Soviets and full-on invasion: an air strike primarily against the Cuban missile bases or a naval blockade of Cuba. McNamara supported the naval blockade as a strong but limited military action that left the U.S. in control. However, the term “blockade” was problematic. According to international law a blockade is an act of war, but the Kennedy administration did not think that the USSR would be provoked to attack by a mere blockade. Admiral Anderson, Chief of Naval Operations wrote a position paper that helped Kennedy to differentiate between what they termed a “quarantine” of offensive weapons and a blockade of all materials, claiming that a classic blockade was not the original intention.

To halt this offensive buildup, a strict quarantine on all offensive military equipment under shipment to Cuba is being initiated. All ships of any kind bound for Cuba, from whatever nation or port, will, if found to contain cargoes of offensive weapons, be turned back. This quarantine will be extended, if needed, to other types of cargo and carriers. We are not at this time, however, denying the necessities of life as the Soviets attempted to do in their Berlin blockade of 1948.

The crisis continued unabated, and on the evening of October 24, the Soviet news agency TASS broadcast a telegram from Khrushchev to President Kennedy in which Khrushchev warned that the United States’s “outright piracy” would lead to war. However, this was followed by a telegram from Khrushchev to Kennedy in which Khrushchev stated, “if you weigh the present situation with a cool head without giving way to passion, you will understand that the Soviet Union cannot afford not to decline the despotic demands of the USA” and that the Soviet Union views the blockade as “an act of aggression” and their ships will be instructed to ignore it.

The U.S. requested an emergency meeting of the United Nations Security Council on October 25. U.S. Ambassador to the United Nations Adlai Stevenson confronted Soviet Ambassador Valerian Zorin in an emergency meeting of the Security Council, challenging him to admit the existence of the missiles. The next day at 10 p.m. EST, the U.S. raised the readiness level of SAC forces to DEFCON 2, indicating “next step to nuclear war,” and one step away from “nuclear war imminent.” For the only confirmed time in U.S. history, while B-52 bombers went on continuous airborne alert, B-47 medium bombers were dispersed to various military and civilian airfields and prepared for takeoff, fully equipped with nuclear warheads, on 15 minutes’ notice.

At this point, the crisis was ostensibly at a stalemate. The USSR had shown no indication that they would back down and in fact made several comments to the contrary. The U.S. had no reason to believe otherwise and was in the early stages of preparing for an invasion along with a nuclear strike on the Soviet Union in case it responded militarily as expected.

The crisis continued with Cuba preparing for invasion until October 27 when, after much deliberation between the Soviet Union and Kennedy’s cabinet, Kennedy secretly agreed to remove all missiles set in southern Italy and in Turkey, the latter on the border of the Soviet Union, in exchange for Khrushchev’s removal of all missiles in Cuba. At 9 a.m. EST on October 28, a new message from Khrushchev was broadcast on Radio Moscow in which he stated that “the Soviet government, in addition to previously issued instructions on the cessation of further work at the building sites for the weapons, has issued a new order on the dismantling of the weapons which you describe as ‘offensive’ and their crating and return to the Soviet Union.” Kennedy immediately responded, issuing a statement calling the letter “an important and constructive contribution to peace.” He continued this with a formal letter:

I consider my letter to you of October twenty-seventh and your reply of today as firm undertakings on the part of both our governments which should be promptly carried out … The US will make a statement in the framework of the Security Council in reference to Cuba as follows: it will declare that the United States of America will respect the inviolability of Cuban borders, its sovereignty, that it take the pledge not to interfere in internal affairs, not to intrude themselves and not to permit our territory to be used as a bridgehead for the invasion of Cuba, and will restrain those who would plan to carry an aggression against Cuba, either from US territory or from the territory of other countries neighboring to Cuba.

The compromise embarrassed Khrushchev and the Soviet Union because the withdrawal of U.S. missiles from Italy and Turkey was a secret deal between Kennedy and Khrushchev. Khrushchev went to Kennedy thinking that the crisis was getting out of hand. The Soviets were seen as retreating from circumstances they had started. Khrushchev’s fall from power two years later was in part because of the Politburo embarrassment at both Khrushchev’s eventual concessions to the U.S. and his ineptitude in precipitating the crisis in the first place. According to Dobrynin, the top Soviet leadership took the Cuban outcome as “a blow to its prestige bordering on humiliation.” 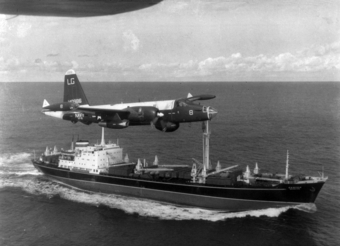