The Schlieffen Plan was a deployment plan and operational guide for a decisive initial offensive campaign in a one-front war against the French Third Republic. In 1914 it was deployed against two fronts with major changes by Commander-in-Chief Moltke the Younger, resulting in a failure to achieve the decisive victory Schlieffen had planned.

counter-offensive
A term used by the military to describe large-scale, usually strategic offensive operations by forces that successfully halt the enemy’s offensive while occupying defensive positions. It is executed after exhausting the enemy’s front line troops when their reserves are committed to combat and incapable of breaching defenses, but before the enemy has had the opportunity to assume new defensive positions.
Alfred von Schlieffen
A German field marshal and strategist who served as Chief of the Imperial German General Staff from 1891 to 1906. His name lived on in the 1905-06 Schlieffen Plan, then Aufmarsch I, a deployment plan and operational guide for a decisive initial offensive campaign in a one-front war against the French Third Republic.

The Schlieffen Plan was the strategy for the German invasion of France and Belgium in August 1914. Field Marshal Alfred von Schlieffen was the Chief of the Imperial Army German General Staff from 1891 to 1906 and in 1905-06 devised a deployment plan for a winning offensive in a one-front war against the French Third Republic. After the war, German historians and other writers described the plan as a blueprint for victory. Some claimed the plan was ruined by Colonel-General Helmuth von Moltke the Younger, the Commander-in-Chief of the German army after Schlieffen retired in 1906 who was dismissed after the First Battle of the Marne (September 5-12, 1914).

The cornerstone of Schlieffen’s war planning was undoubtedly the strategic counter-offensive. Schlieffen was a great believer in the power of the attack in the context of the defensive operation. Germany’s smaller forces relative to the Franco-Russian Entente meant that an offensive posture against one or both was basically suicidal. On the other hand, Schlieffen placed great faith in Germany’s ability to use railways to launch a counter-offensive against a hypothetical French or Russian invasion force, defeat it, then quickly regroup and launch a counter-offensive.

Schlieffen also recognized the need for offensive planning, as failing to do so would limit the German Army’s capabilities. In 1897, Schlieffen developed a tactical plan that – acknowledging the German army’s limited offensive power and capacity for strategic maneuvers – basically amounted to using brute force to advance beyond the French defenses on the Franco-German border.

In 1905, Schlieffen developed what was truly his first plan for a strategic offensive operation, the Schlieffen plan Denkschrift (Schlieffen plan memorandum). This was designed for an isolated Franco-German war that would not involve Russia, calling for Germany to attack France.

However, the bulk of Schlieffen’s planning followed his personal preferences for the counter-offensive. Schlieffen’s war plans by the name of Aufmarsch II and Aufmarsch Ost continued to stress that Germany’s best hope for survival in a war with the Franco-Russian entente was a defensive strategy. This was reconciled with a very offensive tactical posture as Schlieffen held that the destruction of an attacking force required that it be surrounded and attacked from all sides until surrender, not merely repulsed as in a passive defense.

In August 1905 Schlieffen was kicked by a companion’s horse, rendering him incapable of battle at age 72. He began planning his retirement, but his successor was undetermined. A favourite of the Emperor was Helmuth von Moltke the Younger, who became Chief of Staff after Schlieffen retired.

Moltke went on to devise Aufmarsch II Ost, a variant on Schlieffen’s Aufmarsch Ost designed for an isolated Russo-German war. Schlieffen seemingly tried to impress upon Moltke that an offensive strategy against France could only work in the event of an isolated Franco-German war, as German forces would otherwise be too weak to implement it. Knowing this, Moltke still attempted to apply the offensive strategy of Aufmarsch I West to the two-front war Germany faced in 1914 and Schlieffen’s defensive plan Aufmarsch II West. With too few troops to cross west of Paris let alone attempt a crossing of the Seine, Moltke’s campaign failed to breach the French “second defensive sector” and his troops were pushed back in the Battle of the Marne.

Post-war writing by senior German officers like Hermann von Kuhl, Gerhard Tappen, Wilhelm Groener, and official historians led by the former Lieutenant-Colonel Wolfgang Förster established a commonly accepted narrative that it was Moltke the Younger’s failure to follow the blueprint rather than German strategic miscalculation that condemned the belligerents to four years of attrition warfare instead of the quick, decisive conflict it could have been.

Deployment of the Schlieffen Plan

At the outbreak of World War I, 80% of the German army was deployed as seven field armies in the west according to the plan Aufmarsch II West. However, they were then assigned to execute the retired deployment plan Aufmarsch I West, from the Schlieffen Plan. This would march German armies through northern Belgium and into France in an attempt to encircle the French army and breach the “second defensive area” of the fortresses of Verdun and Paris and the Marne river.

Aufmarsch I West was one of four deployment plans available to the German General Staff in 1914. Each favored certain operations but did not specify exactly how those operations would be carried out, leaving the commanding officers to do so at their own initiative with minimal oversight. Aufmarsch I West, designed for a one-front war with France, was retired once it became clear it was irrelevant to the wars Germany could expect to face. Both Russia and Britain were expected to help France with no possibility of assistance from Italian or Austro-Hungarian troops. But despite its unsuitability and the availability of more sensible and decisive options, it retained a certain allure due to its offensive nature and the pessimism of pre-war thinking, which expected offensive operations to be short-lived, costly in casualties, and unlikely to be decisive. Accordingly, the Aufmarsch II West deployment was changed for the offensive of 1914, despite its unrealistic goals and the insufficient forces Germany had available for decisive success. Moltke took Schlieffen’s plan and modified the deployment of forces on the western front by reducing the right wing, the one to advance through Belgium, from 85% to 70%. In the end, the Schlieffen plan was so radically modified by Moltke that it could be more properly called the Moltke Plan.

Germany attacked Luxembourg on August 2 and on August 3 declared war on France. On August 4, after Belgium refused to permit German troops to cross its borders into France, Germany declared war on Belgium as well. Britain declared war on Germany on the same day following an “unsatisfactory reply” to the British ultimatum that Belgium must be kept neutral.

In the end, Germany failed to avoid a long, two-front war, but had fought its way into a good defensive position inside France and effectively halved France’s supply of coal. It had also killed or permanently crippled 230,000 more French and British troops than it itself had lost. Despite this, communications problems and questionable command decisions cost Germany the chance of a more decisive outcome. 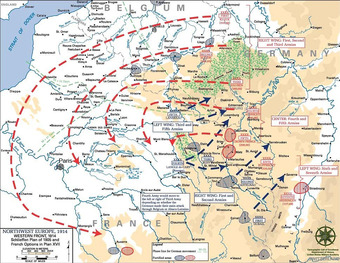