Following the outbreak of war in August 1914, the German Army opened the Western Front by invading Luxembourg and Belgium, but were forced back with the Battle of the Marne.

Battle of the Frontiers
A series of battles along the eastern frontier of France and in southern Belgium shortly after the outbreak of World War I. The battles resolved the military strategies of the French Chief of Staff General Joseph Joffre with Plan XVII and an offensive interpretation of the German Aufmarsch II deployment plan by Helmuth von Moltke the Younger. The Franco-British forces were driven back by the Germans, who were able to invade northern France. French and British rearguard actions delayed the German advance and thus allowed the French time to transfer their forces to the west to defend Paris, resulting in the First Battle of the Marne.
First Battle of the Marne
Also known as the Miracle of the Marne, this World War I battle fought in September 1914 resulted in an Allied victory against the German Army. The battle was the culmination of the German advance into France and pursuit of the Allied armies that followed the Battle of the Frontiers in August and reached the eastern outskirts of Paris. A counter-attack by six French field armies and the British Expeditionary Force (BEF) along the Marne River forced the Imperial German Army to retreat northwest, leading to the Battle of the Aisne and the “Race to the Sea.” The battle was a victory for the Allies, but also set the stage for four years of trench warfare stalemate on the Western Front.
Siege of Liège
The opening engagement of the German invasion of Belgium and the first battle of World War I. The attack on Liège city began on August 5, 1914, and lasted until August 16 when the last fort surrendered. The length of the siege of Liège may have delayed the German invasion of France by 4–5 days.

At the outbreak of the First World War, the German Army (consisting in the west of seven field armies) executed a modified version of the Schlieffen Plan, designed to quickly attack France through neutral Belgium before turning southwards to encircle the French Army on the German border. Belgium’s neutrality was guaranteed by Britain under the 1839 Treaty of London; this caused Britain to join the war at the expiration of its ultimatum at 11 p.m. GMT on August 4, 1914, when armies under German generals Alexander von Kluck and Karl von Bülow attacked Belgium. Luxembourg had been occupied without opposition on August 2. The first battle in Belgium was the Siege of Liège, which lasted from August 5-16. Liège was well-fortified and surprised the German Army under von Bülow with its level of resistance. Nonetheless, German heavy artillery was able to demolish the main forts within a few days. Following the fall of Liège, most of the Belgian field army retreated to Antwerp, leaving the garrison of Namur isolated, with the Belgian capital, Brussels, falling to the Germans on August 20. Although the German army bypassed Antwerp, it remained a threat to their flank. Another siege followed at Namur, lasting from about August 20-23.

For their part, the French had five armies deployed on their borders. The pre-war French offensive plan, Plan XVII, intended to capture Alsace-Lorraine following the outbreak of hostilities. On August 7 the VII Corps attacked Alsace with the objective to capture Mulhouse and Colmar. The main offensive was launched on August 14 with 1st and 2nd Armies attacking toward Sarrebourg-Morhange in Lorraine. In keeping with the Schlieffen Plan, the Germans withdrew slowly while inflicting severe losses upon the French. The French advanced the 3rd and 4th Armies toward the Saar River and attempted to capture Saarburg, attacking Briey and Neufchateau, before being driven back. The French VII Corps captured Mulhouse after a brief engagement on August 7, but German reserve forces engaged them in the Battle of Mulhouse and forced a French retreat.

Battle of the Frontiers

The German Army swept through Belgium, executing civilians and razing villages. The application of “collective responsibility” against a civilian population further galvanized the allies, and newspapers condemned the German invasion and the army’s violence against civilians and property, together called the “Rape of Belgium.” After marching through Belgium, Luxembourg, and the Ardennes, the German Army advanced in the latter half of August into northern France, where they met the French Army under Joseph Joffre and the initial six divisions of the British Expeditionary Force under Sir John French. A series of engagements known as the Battle of the Frontiers ensued, which included the Battle of Charleroi and the Battle of Mons. In the former battle the French Fifth Army was almost destroyed by the German 2nd and 3rd Armies and the latter delayed the German advance by a day. A general Allied retreat followed, resulting in more clashes at the Battle of Le Cateau, the Siege of Maubeuge, and the Battle of St. Quentin (also called the First Battle of Guise).

First Battle of the Marne

The German Army came within 43 miles of Paris but at the First Battle of the Marne (September 6-12), French and British troops were able to force a German retreat by exploiting a gap that appeared between the 1st and 2nd Armies, ending the German advance into France. The German Army retreated north of the Aisne River, establishing the beginnings of a static western front that would last for the next three years. Following this German retirement, the opposing forces made reciprocal outflanking maneuvers known as the Race for the Sea and quickly extended their trench systems from the Swiss frontier to the North Sea. The territory occupied by Germany held 64 percent of French pig-iron production, 24 percent of its steel manufacturing, and 40 percent of the coal industry, dealing a serious blow to French industry.

Laying Trenches and the First Battle of Ypres

On the Entente side (those countries opposing the German alliance), the final lines were occupied by the armies of the Allied countries, with each nation defending a part of the front. From the coast in the north, the primary forces were from Belgium, the British Empire, and France. Following the Battle of the Yser in October, the Belgian army controlled a 22-mile length of West Flanders along the coast known as the Yser Front, along the Yser river and the Yperlee canal from Nieuwpoort to Boesinghe. Stationed to the south was the sector of the British Expeditionary Force (BEF).

From October 19 until November 22, the German forces made their final breakthrough attempt of 1914 during the First Battle of Ypres. Heavy casualties were suffered on both sides but no breakthrough occurred. After the battle, Erich von Falkenhayn judged that it was no longer possible for Germany to win the war and on November 18 called for a diplomatic solution, but Chancellor Theobald von Bethmann-Hollweg, Paul von Hindenburg and Erich Ludendorff disagreed. 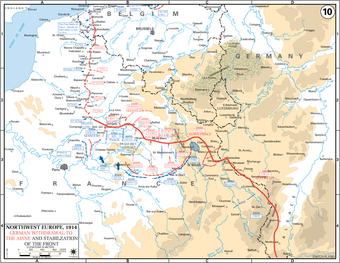