After the German march on Paris was halted at the First Battle of the Marne, both sides dug in along a meandering line of fortified trenches stretching from the North Sea to the Swiss frontier with France. The Western Front settled into a battle of attrition, with a trench line that changed little until 1917.

Race to the Sea
The term described reciprocal attempts by the Franco-British and German armies to envelop the northern flank of the opposing army through Picardy, Artois, and Flanders, rather than an attempt to advance northwards to the sea. The “race” ended on the North Sea coast of Belgium around October 19, when the last open area from Dixmude to the North Sea was occupied by Belgian troops who had been withdrawn from the Siege of Antwerp (September 28 – October 10). The outflanking attempts resulted in a number of encounter battles, but neither side was able to gain a decisive victory.
Battle of the Somme
A battle of the First World War fought by the armies of the British and French empires against the German Empire. It took place between July 1 and November 18, 1916, on both sides of the upper reaches of the River Somme in France. The battle was intended to hasten a victory for the Allies and was the largest battle of the First World War on the Western Front. More than one million were wounded or killed, making it one of the bloodiest battles in human history.
Trench warfare
A type of land warfare using occupied fighting lines consisting largely of trenches, in which troops are significantly protected from the enemy’s small arms fire and sheltered from artillery.

Trench Warfare in World War I

Trench warfare occurs when a revolution in firepower is not matched by similar advances in mobility, resulting in a grueling form of warfare in which the defender holds the advantage. Military tactics developed before World War I failed to keep pace with advances in technology and became obsolete. These advances had allowed the creation of strong defensive systems, which out-of-date military tactics could not break through for most of the war. Barbed wire was a significant hindrance to massed infantry advances, while artillery vastly more lethal than in the 1870s, coupled with machine guns, made crossing open ground extremely difficult. Commanders on both sides failed to develop tactics for breaching entrenched positions without heavy casualties. In time, however, technology began to produce new offensive weapons, such as gas warfare and the tank.

On the Western Front in 1914–18, both sides constructed elaborate trench and dugout systems opposing each other along a front, protected from assault by barbed wire, mines, and other obstacles. The area between opposing trench lines (known as “no man’s land”) was fully exposed to artillery fire from both sides. Attacks, even if successful, often sustained severe casualties.

Just after the First Battle of the Marne (September 5-12, 1914), Entente and German forces repeatedly attempted maneuvering to the north in an effort to outflank each other, a strategy that became known as the “Race to the Sea.” When these outflanking efforts failed, the opposing forces soon found themselves facing an uninterrupted line of entrenched positions from Lorraine to Belgium’s coast Britain. France sought to take the offensive while Germany defended the occupied territories. Consequently, German trenches were much better constructed than those of their enemy; Anglo-French trenches were only intended to be “temporary” before their forces broke through the German defenses.

Trench warfare prevailed on the Western Front from late 1914 until the Germans launched their Spring Offensive on March 21, 1918. After the buildup of forces in 1915, the Western Front became a stalemated struggle between equals to be decided by attrition. The small, improvised trenches of the first few months grew deeper and more complex, gradually becoming vast areas of interlocking defensive works. They resisted both artillery bombardment and mass infantry assault. Shell-proof dugouts became a high priority. Frontal assaults and their associated casualties became inevitable because the continuous trench lines had no open flanks. Casualties of the defenders matched those of the attackers, as vast reserves were expended in costly counter-attacks or exposed to the attacker’s massed artillery. There were periods in which rigid trench warfare broke down, such as during the Battle of the Somme, but the lines never moved very far. The war would be won by the side able to commit the last reserves to the Western Front.

Neither side delivered a decisive blow for the next two years. Throughout 1915–17, the British Empire and France suffered more casualties than Germany because of the strategic and tactical stances chosen by the sides. Strategically, while the Germans only mounted one major offensive, the Allies made several attempts to break through the German lines.

In February 1916 the Germans attacked the French defensive positions at Verdun. Lasting until December 1916, the battle saw initial German gains before French counter-attacks returned them near their starting point. Casualties were greater for the French, but the Germans bled heavily as well, with anywhere from 700,000 to 975,000 casualties suffered between the two combatants. Verdun became a symbol of French determination and self-sacrifice.

The last large-scale offensive of this period was a British attack (with French support) at Passchendaele (July–November 1917). This offensive opened with great promise for the Allies before bogging down in the October mud. Casualties, though disputed, were roughly equal at some 200,000–400,000 per side.

These years of trench warfare in the West saw no major exchanges of territory and, as a result, are often thought of as static and unchanging. However, throughout this period, British, French, and German tactics constantly evolved to meet new battlefield challenges. 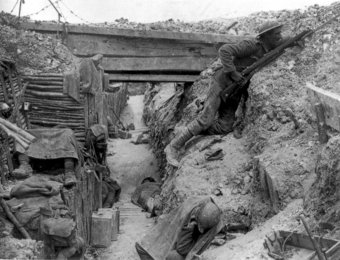 Trench Warfare: Trenches of the 11th Cheshire Regiment at Ovillers-la-Boisselle, on the Somme, July 1916. One sentry keeps watch while the others sleep. Photo by Ernest Brooks.

Both sides tried to break the trench stalemate using scientific and technological advances. On April 22, 1915, at the Second Battle of Ypres, the Germans (violating the Hague Convention) used chlorine gas for the first time on the Western Front. After a two-day bombardment, the Germans released a cloud of 171 tons of chlorine gas onto the battlefield. Though primarily a powerful irritant, it can asphyxiate in high concentrations or prolonged exposure. The gas crept across no man’s land and drifted into the French trenches. The green-yellow cloud killed some defenders and those in the rear fled in panic, creating an undefended 3.7 mile gap in the Allied line. The Germans were unprepared for the level of their success and lacked sufficient reserves to exploit the opening. Canadian troops on the right drew back their left flank and repelled the German advance.

The success of this attack would not be repeated, as the Allies countered by introducing gas masks and other countermeasures. The British retaliated, developing their own chlorine gas and using it at the Battle of Loos in September 1915. Fickle winds and inexperience led to more British casualties from the gas than German. Several types of gas soon became widely used by both sides, and though it never proved a decisive, battle-winning weapon, poison gas became one of the most-feared and best-remembered horrors of the war. French, British, and German forces all escalated the use of gas attacks through the rest of the war, developing the more deadly phosgene gas in 1915, then the infamous mustard gas in 1917, which could linger for days and kill slowly and painfully. Countermeasures also improved and the stalemate continued.

Tanks were developed by Britain and France, and were first used in combat by the British during the Battle of Flers–Courcelette (part of the Battle of the Somme) on September 15, 1916, with only partial success. However, their effectiveness would grow as the war progressed; the Allies built tanks in large numbers, whilst the Germans employed only a few of their own design supplemented by captured Allied tanks.