The End of World War I

The American entry into World War I came in April 1917, after two and a half years of efforts by President Woodrow Wilson to keep the United States neutral.

casus belli
A Latin expression meaning “an act or event that provokes or is used to justify war” (literally, “a case of war”). It involves direct offenses or threats against the nation declaring the war, whereas a casus foederis involves offenses or threats against its ally—usually one bound by a mutual defense pact. Either may be considered an act of war.
Zimmermann Telegram
A secret diplomatic communication issued from the German Foreign Office in January 1917 that proposed a military alliance between Germany and Mexico in the event of the United States entering World War I against Germany. The proposal was intercepted and decoded by British intelligence. Revelation of the contents enraged American public opinion, especially after the German Foreign Secretary Arthur Zimmermann publicly admitted the telegram was genuine on March 3, and helped generate support for the United States declaration of war on Germany in April.
sinking of the Lusitania
On May 7, 1915, during the First World War, as Germany waged submarine warfare against the United Kingdom of Great Britain and Ireland, the Lusitania was identified and torpedoed by the German U-boat U-20 and sank in 18 minutes. The vessel went down 11 miles off the Old Head of Kinsale, Ireland, killing 1,198 and leaving 761 survivors. The sinking turned public opinion in many countries against Germany, contributed to the American entry into World War I, and became an iconic symbol in military recruiting campaigns.

American Neutrality and the Lusitania

At the outbreak of World War I, the United States pursued a policy of non-intervention, avoiding conflict while trying to broker a peace. When the German U-boat U-20 sank the British liner RMS Lusitania on May 7, 1915, with 128 Americans among the dead, President Woodrow Wilson insisted that “America is too proud to fight” but demanded an end to attacks on passenger ships. Germany complied, and Wilson unsuccessfully tried to mediate a settlement. However, he also repeatedly warned that the United States would not tolerate unrestricted submarine warfare, which was in violation of international law. Former president Theodore Roosevelt denounced German acts as “piracy.” Wilson was narrowly reelected in 1916 as his supporters emphasized “he kept us out of war.”

American public opinion was divided, with most before early 1917 strongly of the opinion that the United States should stay out of the war. Opinion changed gradually, partly in response to German actions in Belgium and the sinking of the Lusitania, partly as German Americans lost influence, and partly in response to Wilson’s position that America had to play a role in making the world safe for democracy.

The general public showed little support for entering the war on the side of Germany. The great majority of German Americans and Scandinavian Americans, wanted the United States to remain neutral; however, at the outbreak of war, thousands of U.S. citizens tried to enlist in the German army. The Irish Catholic community, based in the large cities and often in control of the Democratic Party apparatus, was strongly hostile to helping Britain in any way, especially after the Easter uprising of 1916 in Ireland. Most Protestant church leaders in the United States, regardless of their theology, favored pacifistic solutions. Most of the leaders of the women’s movement, typified by Jane Addams, likewise sought brokerage of peace. The most prominent opponent of war was industrialist Henry Ford, who personally financed and led a peace ship to Europe to try to negotiate among the belligerents; no negotiations resulted. 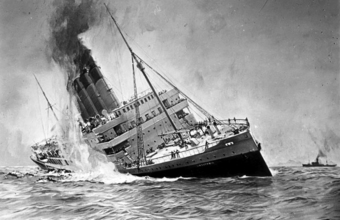 Sinking of the Lusitania: A 1915 painting of the sinking of the passenger ship Lusitania, an event which shifted American public opinion toward entering WWI and became a symbol for the fight against Germany.

The Zimmermann Telegram and Declaration of War

In January 1917, Germany resumed unrestricted submarine warfare, realizing it would mean American entry. The German Foreign Minister, in the Zimmermann Telegram, invited Mexico to join the war as Germany’s ally against the United States. In return, the Germans would finance Mexico’s war and help it recover the territories of Texas, New Mexico, and Arizona. The United Kingdom intercepted the message and presented it to the U.S. embassy in the UK. From there it made its way to President Wilson, who released it to the public. Americans considered the Zimmermann Telegram casus belli.

Popular sentiment in the United States at that time was anti-Mexican as well as anti-German, while in Mexico there was considerable anti-American sentiment. General John J. Pershing had long been chasing the revolutionary Pancho Villa and carried out several cross-border raids. News of the telegram further inflamed tensions between the United States and Mexico.

Wilson asked Congress for “a war to end all wars” that would “make the world safe for democracy” and eliminate militarism from the globe. He argued that the war was important and the U.S. thus must have a voice in the peace conference. After the sinking of seven U.S. merchant ships by submarines and the publication of the Zimmermann telegram, Wilson called for war on Germany, which the U.S. Congress declared on April 6, 1917.

The United States was never formally a member of the Allies but became a self-styled “Associated Power.” It initially had a small army, but after the passage of the Selective Service Act drafted 2.8 million men, and by summer 1918 was sending 10,000 fresh soldiers to France every day. In 1917, the U.S. Congress gave citizenship to Puerto Ricans drafted to participate in World War I as part of the Jones Act. If Germany believed it would be many more months before American soldiers would arrive and that their arrival could be stopped by U-boats, it had miscalculated.

The United States Navy sent a battleship group to Scapa Flow to join the British Grand Fleet, destroyers to Queenstown, Ireland, and submarines to help guard convoys. Several regiments of U.S. Marines were also dispatched to France. The British and French wanted American units to reinforce their troops already on the battle lines and not waste scarce shipping on supplies. General John J. Pershing, American Expeditionary Forces (AEF) commander, refused to break up American units to be used as filler material. As an exception, he did allow African-American combat regiments to be used in French divisions. The Harlem Hellfighters fought as part of the French 16th Division and earned a unit Croix de Guerre for their actions at Château-Thierry, Belleau Wood, and Sechault. AEF doctrine called for the use of frontal assaults, which had long since been discarded by British Empire and French commanders due to the large loss of life that resulted. 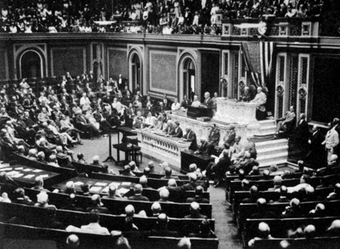