The Treaty of Brest-Litovsk

The Russian government collapsed in March 1917. The subsequent October Revolution followed by a further military defeat brought the Russians to terms with the Central Powers via the Treaty of Brest-Litovsk, which granted the Germans a significant victory and resulted in Russia exiting the war and breaking ties with the Allied Powers.

State the consequences of the Treaty of Brest-Litovsk

Eastern Front of World War I
A theater of operations that encompassed at its greatest extent the entire frontier between the Russian Empire and Romania on one side and the Austro-Hungarian Empire, Bulgaria, the Ottoman Empire, and the German Empire on the other. It stretched from the Baltic Sea in the north to the Black Sea in the south, included most of Eastern Europe, and stretched deep into Central Europe as well. The term contrasts with “Western Front,” which was fought in Belgium and France.
October Revolution
A seizure of state power instrumental in the larger Russian Revolution of 1917. It took place with an armed insurrection in Petrograd on October 25, 1917, and followed and capitalized on the February Revolution of the same year, which overthrew the Tsarist autocracy and resulted in a provisional government. During this time, urban workers began to organize into councils (Russian: soviet) wherein revolutionaries criticized the provisional government and its actions. This uprising overthrew the provisional government and gave the power to the local soviets.
Russian Civil War
A multi-party war in the former Russian Empire immediately after the Russian Revolutions of 1917, as many factions vied to determine Russia’s political future. The two largest combatant groups were the Red Army, fighting for the Bolshevik form of socialism, and the loosely allied forces known as the White Army, which included diverse interests favoring monarchism, capitalism, and alternative forms of socialism, each with democratic and antidemocratic variants. In addition, rival militant socialists and non-ideological Green armies fought against both the Bolsheviks and the Whites. The Red Army defeated the White Armed Forces of South Russia in Ukraine and the army led by Admiral Aleksandr Kolchak in Siberia in 1919. The remains of the White forces commanded by Pyotr Nikolayevich Wrangel were beaten in Crimea and evacuated in late 1920. Lesser battles continued on the periphery for two more years, and minor skirmishes with the remnants of the White forces in the Far East continued well into 1923.
Treaty of Brest-Litovsk
A peace treaty signed on March 3, 1918, between the new Bolshevik government of Soviet Russia and the Central Powers (Germany, Austria-Hungary, Bulgaria, and the Ottoman Empire), that ended Russia’s participation in World War I.

The Treaty of Brest-Litovsk was a peace treaty signed on March 3, 1918, between the new Bolshevik government of Soviet Russia and the Central Powers (Germany, Austria-Hungary, Bulgaria, and the Ottoman Empire), that ended Russia’s participation in World War I. The treaty was signed at Brest-Litovsk after two months of negotiations and was forced on the Bolshevik government by the threat of further advances by German and Austrian forces. According to the treaty, Soviet Russia defaulted on all of Imperial Russia’s commitments to the Triple Entente alliance.

The treaty was effectively terminated in November 1918 when Germany surrendered to the Allies. However, in the meantime it provided some relief to the Bolsheviks, already fighting the Russian Civil War, by the renouncement of Russia’s claims on Poland, Finland, Estonia, Latvia, Belarus, Ukraine, and Lithuania.

By 1917, Germany and Imperial Russia were in a stalemate on the Eastern Front of World War I. At the time, the Russian economy nearly collapsed under the strain of the war effort. The large numbers of war casualties and persistent food shortages in the major urban centers brought about civil unrest, known as the February Revolution, that forced Tsar Nicholas II to abdicate. The Russian provisional government that replaced the Tsar (initially presided by prince Georgy Lvov, later by Alexander Kerensky), decided to continue the war on the Entente side. Foreign Minister Pavel Milyukov sent the Entente Powers a telegram, known as the Milyukov note, affirming that the provisional government would continue the war with the same aims as Imperial Russia.

The pro-war provisional government was opposed by the self-proclaimed Petrograd Soviet of Workers’ and Soldiers’ Deputies, dominated by leftist parties. Its Order No. 1 called for an overriding mandate to soldier committees rather than army officers. The Soviet started to form its own paramilitary power, the Red Guards, in March 1917.

The position of the provisional government led the Germans to offer support to the Russian opposition, the Communist Party (Bolsheviks) in particular, who were proponents of Russia’s withdrawal from the war. In April 1917, Germany allowed Bolshevik leader Vladimir Lenin to return to Russia from his exile in Switzerland and offered him financial help. Upon his arrival in Petrograd, Lenin proclaimed his April Theses, which included a call to turn all political power over to workers’ and soldiers’ soviets (councils) and an immediate withdrawal of Russia from the war. Throughout 1917, Bolsheviks spread defeatist and revolutionary propaganda calling for the overthrow of the provisional government and an end to the war. Following the disastrous failure of the Kerensky Offensive, discipline in the Russian army deteriorated completely. Soldiers would disobey orders, often under the influence of Bolshevik agitation, and allowed soldiers’ committees to take control of their units after deposing the officers. Russian and German soldiers occasionally left their positions and fraternized.

The defeat and ongoing hardships of war led to anti-government riots in Petrograd headed by the Bolsheviks, the “July Days” of 1917. Several months later on November 7 , Red Guards seized the Winter Palace and arrested the provisional government in what is known as the October Revolution.

The newly established Soviet government decided to end Russia’s participation in the war with Germany and its allies. On October 26, 1917, Vladimir Lenin signed the Decree on Peace, which was approved by the Second Congress of the Soviet of Workers’, Soldiers’, and Peasants’ Deputies. The Decree called “upon all the belligerent nations and their governments to start immediate negotiations for peace” and proposed an immediate withdrawal of Russia from World War I. Leon Trotsky was appointed Commissar of Foreign Affairs in the new Bolshevik government. In preparation for peace talks with the representatives of the German government and other Central Powers, Leon Trotsky appointed his good friend Adolph Joffe to represent the Bolsheviks at the peace conference.

On December 15, 1917, an armistice between Soviet Russia and the Central Powers was concluded and fighting stopped. On December 22, peace negotiations began at Brest-Litovsk. The Treaty of Brest-Litovsk was signed on March 3, 1918. The signatories were Bolshevik Russia signed by Grigori Yakovlovich Sokolnikov on the one side and the German Empire, Austria-Hungary, Bulgaria, and Ottoman Empire on the other. The treaty marked Russia’s final withdrawal from World War I as an enemy of her co-signatories, on unexpectedly humiliating terms. 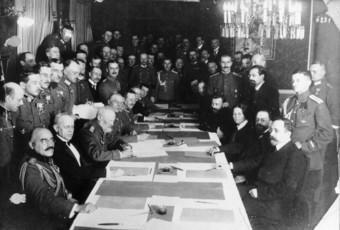 Treaty of Brest-Litovsk: A photo of the signing of armistice between Russia and Germany on March 3, 1918. The treaty marked Russia’s final withdrawal from World War I and resulted in Russia losing major territorial holdings.

In the treaty, Bolshevik Russia ceded the Baltic States to Germany; they were meant to become German vassal states under German princelings. Russia ceded its province of Kars Oblast in the South Caucasus to the Ottoman Empire and recognized the independence of Ukraine. Further, Russia agreed to pay six billion German gold marks in reparations. Historian Spencer Tucker says, “The German General Staff had formulated extraordinarily harsh terms that shocked even the German negotiator.” Congress Poland was not mentioned in the treaty, as Germans refused to recognize the existence of any Polish representatives, which in turn led to Polish protests. When Germans later complained that the Treaty of Versailles of 1919 was too harsh, the Allies (and historians favorable to the Allies) responded that it was more benign than Brest-Litovsk.

With the adoption of the Treaty of Brest-Litovsk, the Entente no longer existed. Despite this enormous apparent German success, the manpower required for German occupation of former Russian territory may have contributed to the failure of the Spring Offensive and secured relatively little food or other material for the Central Powers war effort. The Allied powers led a small-scale invasion of Russia, partly to stop Germany from exploiting Russian resources, and to a lesser extent, to support the “Whites” (as opposed to the “Reds”) in the Russian Civil War. Allied troops landed in Arkhangelsk and in Vladivostok as part of the North Russia Intervention.

The Treaty of Brest-Litovsk lasted just over eight months. Germany renounced the treaty and broke diplomatic relations with Soviet Russia on November 5. The Ottoman Empire broke the treaty after just two months by invading the newly created First Republic of Armenia in May 1918. In the Armistice of November 11, 1918, that ended World War I, one of the first conditions was the complete abrogation of the Brest-Litovsk treaty. Following the German capitulation, the Bolshevik legislature annulled the treaty on November 13, 1918. In the year after the armistice, the German Army withdrew its occupying forces from the lands gained in Brest-Litovsk, leaving behind a power vacuum that various forces subsequently attempted to fill. In the Treaty of Rapallo, concluded in April 1922, Germany accepted the Treaty’s nullification, and the two powers agreed to abandon all war-related territorial and financial claims against each other.

The Treaty of Brest-Litovsk marked a significant contraction of the territory controlled by the Bolsheviks or that they could lay claim to as effective successors of the Russian Empire. While the independence of Finland and Poland was already accepted in principle, the loss of Ukraine and the Baltics created, from the Bolshevik perspective, dangerous bases of anti-Bolshevik military activity in the subsequent Russian Civil War (1918–1922). Indeed, many Russian nationalists and some revolutionaries were furious at the Bolsheviks’ acceptance of the treaty and joined forces to fight them. Non-Russians who inhabited the lands lost by Bolshevik Russia in the treaty saw the changes as an opportunity to set up independent states not under Bolshevik rule. Immediately after the signing of the treaty, Lenin moved the Soviet Russian government from Petrograd to Moscow.

The fate of the region and the location of the eventual western border of the Soviet Union was settled in violent and chaotic struggles over the course of the next three-and-a-half years.