Soon after the outbreak of hostilities, Britain began a naval blockade of Germany. This strategy proved effective, cutting off vital military and civilian supplies and helping the Allies to eventually win the war.

Evaluate the effectiveness of the British Naval Blockade

German Revolution of 1918–19
Civil conflict in the German Empire at the end of the First World War resulted in the replacement of Germany’s Imperial government with a republic. The revolutionary period lasted from November 1918 until the establishment in August 1919 of a republic that later became known as the Weimar Republic.
Blockade of Germany
A prolonged naval operation conducted by the Allied Powers, especially Great Britain, during and after World War I to restrict the maritime supply of goods to the Central Powers, which included Germany, Austria-Hungary, and Turkey.

The Blockade of Germany, or the Blockade of Europe, occurred from 1914 to 1919. It was a prolonged naval operation conducted by the Allied Powers, especially Great Britain, during and after World War I to restrict the maritime supply of goods to the Central Powers, which included Germany, Austria-Hungary, and Turkey. It is considered one of the key elements in the eventual Allied victory in the war. The German Board of Public Health claimed that 763,000 German civilians died from starvation and disease caused by the blockade through December 1918. An academic study done in 1928 put the death toll at 424,000.

Both the German Empire and the United Kingdom relied heavily on imports to feed their population and supply their war industry. Imports of foodstuffs and war material of all European belligerents came primarily from the Americas and had to be shipped across the Atlantic Ocean, so Britain and Germany both aimed to blockade each other. The British had the Royal Navy, which was superior in numbers and could operate throughout the British Empire, while the German Kaiserliche Marine surface fleet was mainly restricted to the German Bight and used commerce raiders and unrestricted submarine warfare to operate elsewhere.

The British—with their overwhelming sea power—established a naval blockade of Germany immediately on the outbreak of war in August 1914, issuing a comprehensive list of contraband that all but prohibited American trade with the Central powers. In early November 1914 they declared the North Sea a war zone, with any ships entering at their own risk. The blockade was unusually restrictive in that even foodstuffs were considered “contraband of war.” There were complaints about breaches of international law; however, most neutral merchant vessels agreed to dock at British ports to be inspected and then escorted—less any “illegal” cargo destined for Germany—through the British minefields to their destinations.

Did the Blockade Win the War?

The first official accounts of the blockade, written by Professor A. C. Bell and Brigadier-General Sir James E. Edmonds, differed in their accounts of its effects upon German food supplies. Bell—who employed German data—argued that the blockade led to revolutionary uprisings in Germany and caused the collapse of the Kaiser′s administration. Edmonds, supported by Colonel Irwin L. Hunt (who was in charge of civil affairs in the American occupied zone of the Rhineland), held that food shortages were a post-armistice phenomenon caused solely by the disruptions of the German Revolution of 1918–19.

More recent studies also disagree on the severity of the blockade′s impact on the affected populations at the time of the revolution and the armistice. Some hold that the blockade starved Germany and the Central Powers into defeat in 1918, but others maintain that while the German population did indeed go hungry as a result of the blockade, Germany′s rationing system kept all but a few from actually starving to death. German success against the Russians on the Eastern Front culminating in the Treaty of Brest-Litovsk gave Germany access to the resources of Poland and other eastern territories, which did much to counter the effects of the blockade. The armistice on November 11 was forced by events on the Western Front rather than any actions of the civilian population. Germany’s largest ally, Austria-Hungary, had already signed an armistice on November 3, exposing Germany to an invasion from the south.

Nevertheless, it is accepted that the blockade made a large contribution to the outcome of the war; by 1915, Germany′s imports had already fallen by 55% from their prewar levels and the exports were 53% of what they were in 1914. Apart from leading to shortages in vital raw materials such as coal and metals, the blockade also deprived Germany of supplies of fertilizer that were vital to agriculture. This latter led to staples such as grain, potatoes, meat, and dairy products becoming so scarce by the end of 1916 that many people were obliged to instead consume ersatz products including Kriegsbrot (“war bread”) and powdered milk. The food shortages caused looting and riots not only in Germany, but also in Vienna and Budapest. Austria-Hungary even hijacked ships on the Danube that were meant to deliver food to Germany.

The German government made strong attempts to counter the effects of the blockade; the Hindenburg Programme of German economic mobilization launched in August 1916 was designed to raise productivity by the compulsory employment of all men between the ages of 17 and 60. A complicated rationing system introduced in January 1915 aimed to ensure that a minimum nutritional need was met, with “war kitchens” providing cheap mass meals to impoverished civilians in larger cities. All these schemes enjoyed only limited success, and the average daily diet of 1,000 calories was insufficient to maintain a good standard of health, resulting by 1917 in widespread disorders caused by malnutrition such as scurvy, tuberculosis, and dysentery.

The blockade also had a detrimental effect on the U.S. economy. Under pressure especially from commercial interests wishing to profit from wartime trade with both sides, the U.S. government protested vigorously. Britain did not wish to antagonize the U.S., but cutting off trade to the enemy seemed a more pressing goal. Eventually, Germany′s submarine campaign and the subsequent sinking of the RMS Lusitania and other civilian vessels with Americans on board did far more to antagonize U.S. opinion than the blockade had. 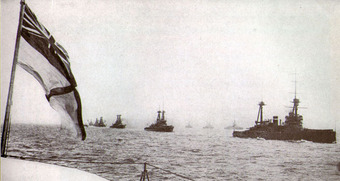 British Grand Fleet: The Grand Fleet sailing in parallel columns during the First World War. The British Navy was responsible for the successful Blockade of Germany, which cut off vital supplies from Germany and contributed to the defeat of the Central Powers.