The Hundred Days Offensive was the final period of World War I, during which the Allies launched a series of offensive attacks against the Central Powers that pushed the Germans out of France and led to their defeat.

Weimar Republic
An unofficial historical designation for the German state between 1919 and 1933. The name derives from the city of Weimar, where its constitutional assembly first took place. In its 14 years, it faced numerous problems, including hyperinflation, political extremism (with paramilitaries – both left- and right-wing); and contentious relationships with the victors of the First World War. Hitler’s seizure of power brought the republic to an end; as democracy collapsed, a single-party state founded the Nazi era.
Hundred Days Offensive
The final period of the First World War, during which the Allies launched a series of offensives against the Central Powers on the Western Front from August 8 to November 11, 1918, beginning with the Battle of Amiens.
Hindenburg Line
A German defensive position of World War I, built during the winter of 1916-1917 on the Western Front from Arras to Laffaux, near Soissons on the Aisne. Construction of this position in France was begun by the Germans in September 1916, to make retirement from the Somme front possible and counter an anticipated increase in the power of Anglo-French attacks in 1917.
Spring Offensive
A series of German attacks along the Western Front during the First World War, beginning on March 21, 1918, that marked the deepest advances by either side since 1914. The Germans realized that their only remaining chance of victory was to defeat the Allies before the overwhelming human and matériel resources of the United States could be fully deployed. They also had the temporary advantage in numbers afforded by the nearly 50 divisions freed by the Russian surrender.

The Hundred Days Offensive was the final period of the First World War, during which the Allies launched a series of offensives against the Central Powers on the Western Front from August 8 to November 11, 1918, beginning with the Battle of Amiens. The offensive essentially pushed the Germans out of France, forcing them to retreat beyond the Hindenburg Line, and was followed by an armistice. The term “Hundred Days Offensive” does not refer to a specific battle or unified strategy, but rather the rapid series of Allied victories starting with the Battle of Amiens.

The Spring Offensive of the German Army on the Western Front began in March 1918 with Operation Michael and had petered out by July. The Germans advanced to the river Marne but failed to achieve a decisive breakthrough. When Operation Marne-Rheims ended in July, the Allied supreme commander Ferdinand Foch, ordered a counter-offensive which became known as the Second Battle of the Marne. The Germans, recognizing their untenable position, withdrew from the Marne towards the north. For this victory, Foch was granted the title Marshal of France.

Foch thought the time had arrived for the Allies to return to the offensive. The American Expeditionary Force (AEF, General John J. Pershing), was present in France in large numbers and invigorated the Allied armies. Pershing was keen to use his army in an independent role. The British Expeditionary Force (BEF) had also been reinforced by large numbers of troops returned from the Sinai and Palestine Campaign and the Italian Front, as well as replacements held back in Britain by the Prime Minister, David Lloyd George.

A number of proposals were considered and finally, Foch agreed on a proposal by Field Marshal Sir Douglas Haig, Commander-in-Chief (C-in-C) of the BEF, to strike on the River Somme, east of Amiens and south-west of the site of the 1916 Battle of the Somme, with the intention of forcing the Germans away from the vital Amiens-Paris railway. The Somme was chosen as a suitable site for several reasons. As in 1916, it marked the boundary between the BEF and the French armies, in this case defined by the Amiens-Roye road, allowing the two armies to cooperate. Also, the Picardy countryside provided a good surface for tanks, which was not the case in Flanders. Finally, the German defenses, manned by the German 2nd Army (General Georg von der Marwitz), were relatively weak, having been subjected to continual raiding by the Australians in a process termed peaceful penetration.

The Hundred Days Offensive began on August 8, 1918, with the Battle of Amiens. The battle involved over 400 tanks and 120,000 British, Dominion, and French troops, and by the end of its first day a gap 15 miles long had been created in the German lines. The defenders displayed a marked collapse in morale, causing German General Erich Ludendorff to refer to this day as the “Black Day of the German army.” After an advance as far as 14 miles, German resistance stiffened, and the battle was concluded on August 12.

Rather than continuing the Amiens battle past the point of initial success, as had been done so many times in the past, the Allies shifted their attention elsewhere. Allied leaders had now realized that to continue an attack after resistance had hardened was a waste of lives, and it was better to turn a line than to try to roll over it. They began to undertake attacks in quick order to take advantage of successful advances on the flanks, then broke them off when the initial impetus was lost.

British and Dominion forces launched the next phase of the campaign with the Battle of Albert on August 21. The assault was widened by French and further British forces in the following days. During the last week of August, the Allied pressure along a 68-mile front against the enemy was heavy and unrelenting. From German accounts, “Each day was spent in bloody fighting against an ever and again on-storming enemy, and nights passed without sleep in retirements to new lines.”

Faced with these advances, on September 2 the German Supreme Army Command issued orders to withdraw to the Hindenburg Line in the south.

In nearly four weeks of fighting beginning August 8, over 100,000 German prisoners were taken. The German High Command realized that the war was lost and made attempts to reach a satisfactory end. The day after that battle, Ludendorff said: “We cannot win the war any more, but we must not lose it either.” 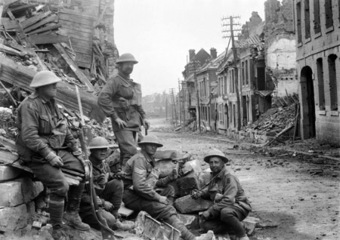 The Hundred Days Offensive:  September 1, 1918, Péronne (Somme). A machine gun position established by the Australian 54th Battalion during its attack on German forces in the town.

The final assault on the Hindenburg Line began with the Meuse-Argonne Offensive, launched by French and American troops on September 27. The following week, cooperating French and American units broke through in Champagne at the Battle of Blanc Mont Ridge, forcing the Germans off the commanding heights and closing toward the Belgian frontier. On October 8, the line was pierced again by British and Dominion troops at the Battle of Cambrai.

With the military faltering and widespread loss of confidence in the Kaiser, Germany moved towards surrender. Prince Maximilian of Baden took charge of a new government as Chancellor of Germany to negotiate with the Allies. Negotiations with President Wilson began immediately in the hope that he would offer better terms than the British and French. Wilson demanded a constitutional monarchy and parliamentary control over the German military. There was no resistance when the Social Democrat Philipp Scheidemann declared Germany a republic on November 9. The Kaiser, kings, and other hereditary rulers were removed from power and Wilhelm fled to exile in the Netherlands. Imperial Germany was dead; a new Germany had been born as the Weimar Republic.

Soon after, the Germans signed the Armistice of Compiègne, which ended the fighting on the Western Front. It went into effect at 11 a.m. Paris time on November 11, 1918 (“the eleventh hour of the eleventh day of the eleventh month”), and marked a victory for the Allies and a complete defeat for Germany, although not formally a surrender. Although the armistice ended the actual fighting, it took six months of negotiations at the Paris Peace Conference to conclude the peace treaty, the Treaty of Versailles. 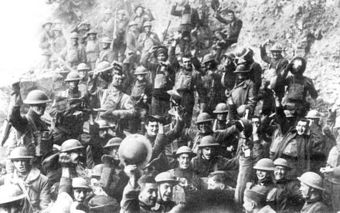 Armistice of Compiègne: Men of US 64th Regiment, 7th Infantry Division, celebrate the news of the Armistice, 11 November 1918, which ended the hostilities of WWI.