The Treaty of Versailles

29.5: The Treaty of Versailles

The “Big Four” (United States, Great Britain, France, and Italy) made all the major decisions of the Paris Peace Conference, although they disagreed on several points.

George Clemenceau
A French politician, physician, and journalist who served as Prime Minister of France during the First World War. A leader of the Radical Party, he played a central role in the politics of the French Third Republic. He was one of the principal architects of the Treaty of Versailles at the Paris Peace Conference of 1919. Nicknamed “Père la Victoire” (Father Victory) or “Le Tigre” (The Tiger), he took a harsh position against defeated Germany, though not quite as much as the President Raymond Poincaré, and won agreement on Germany’s payment of large sums for reparations.
David Lloyd George
British Liberal politician and statesman. As Chancellor of the Exchequer (1908–1915), he was a key figure in the introduction of many reforms that laid the foundations of the modern welfare state. His most important role came as the highly energetic Prime Minister of the Wartime Coalition Government (1916–22), during and immediately after the First World War. He was a major player at the Paris Peace Conference of 1919 that reordered Europe after the defeat of the Central Powers.
Woodrow Wilson
An American politician and academic who served as the 28th President of the United States from 1913 to 1921. Leading a Congress in Democratic hands, he oversaw the passage of progressive legislative policies unparalleled until the New Deal in 1933. The Federal Reserve Act, Federal Trade Commission Act, Clayton Antitrust Act, and Federal Farm Loan Act were some of these new policies. His second term was dominated by American entry into World War I.
Vittorio Orlando
An Italian statesman known for representing Italy in the 1919 Paris Peace Conference with his foreign minister Sidney Sonnino. He was also known as “Premier of Victory” for defeating the Central Powers along with the Entente in World War I. He was a member and president of the Constitutional Assembly that changed the Italian form of government into a republic.

The Paris Peace Conference, also known as Versailles Peace Conference, was the meeting of the Allied victors after the end of World War I to set the peace terms for the defeated Central Powers following the armistices of 1918. It took place in Paris during 1919 and involved diplomats from more than 32 countries and nationalities, including some non-governmental groups, but the defeated powers were not invited.

The “Big Four” were President Woodrow Wilson of the United States, Prime Minister David Lloyd George of Great Britain, George Clemenceau of France, and of least importance, Italian Prime Minister Vittorio Orlando. They met informally 145 times and made all the major decisions, which in turn were ratified by the others.

The conference opened on January 18, 1919. This date was symbolic, the anniversary of the proclamation of William I as German Emperor in 1871 in the Hall of Mirrors at the Palace of Versailles, shortly before the end of the Siege of Paris. This date was also imbued with significance in Germany as the anniversary of the establishment of the Kingdom of Prussia in 1701. Delegates from 27 nations were assigned to 52 commissions that held 1,646 sessions to prepare reports with the help of many experts on topics ranging from prisoners of war to undersea cables to international aviation to responsibility for the war. Key recommendations were folded into the Treaty of Versailles with Germany, which had 15 chapters and 440 clauses, as well as treaties for the other defeated nations. 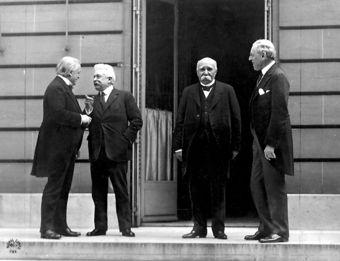 The Big Four: “The Big Four” made all the major decisions at the Paris Peace Conference (from left to right, David Lloyd George of Britain, Vittorio Emanuele Orlando of Italy, Georges Clemenceau of France, Woodrow Wilson of the U.S.)

Wilson’s diplomacy and his Fourteen Points essentially established the conditions for the armistices that brought an end to World War I. Wilson felt it was his duty and obligation to the people of the world to be a prominent figure at the peace negotiations. High hopes and expectations were placed on him to deliver what he had promised for the post-war era. In doing so, Wilson ultimately began to lead the foreign policy of the United States toward interventionism, a move strongly resisted in some domestic circles. Wilson took many domestic progressive ideas and translated them into foreign policy (free trade, open agreements, democracy, and self-determination). One of his major aims was to found a League of Nations “for the purpose of affording mutual guarantees of political independence and territorial integrity to great and small states alike.”

Once Wilson arrived, however, he found “rivalries, and conflicting claims previously submerged.” He mostly tried to sway the direction that the French (Georges Clemenceau) and British (Lloyd George) delegations were taking towards Germany and its allies in Europe, as well as the former Ottoman lands in the Middle East. Wilson’s attempts to gain acceptance of his Fourteen Points ultimately failed after France and Britain refused to adopt some specific points and its core principles.

In Europe, several of his Fourteen Points conflicted with the other powers. The United States did not encourage or believe that the responsibility for the war that Article 231 placed on Germany was fair or warranted. It would not be until 1921 that the United States finally signed separate peace treaties with Germany, Austria, and Hungary.

In the Middle East, negotiations were complicated by competing aims, claims, and the new mandate system. The United States hoped to establish a more liberal and diplomatic world, as stated in the Fourteen Points, where democracy, sovereignty, liberty, and self-determination would be respected. France and Britain, on the other hand, already controlled empires, wielded power over their subjects around the world, and still aspired to be dominant colonial powers.

Maintenance of the British Empire’s unity, holdings, and interests was an overarching concern for the British delegates to the conference, with more specific goals of:

Convinced that Canada had become a nation on the battlefields of Europe, its Prime Minister, Sir Robert Borden, demanded that it have a separate seat at the conference. This was initially opposed not only by Britain but also by the United States, which saw a dominion delegation as an extra British vote. Borden responded by pointing out that since Canada had lost nearly 60,000 men, a far larger proportion of its men compared to the 50,000 American losses, at least had the right to the representation of a “minor” power. The British Prime Minister, David Lloyd George, eventually relented, and convinced the reluctant Americans to accept the presence of delegations from Canada, India, Australia, Newfoundland, New Zealand, and South Africa. They also received their own seats in the League of Nations.

David Lloyd George commented that he did “not do badly” at the peace conference, “considering I was seated between Jesus Christ and Napoleon.” This was a reference to the very idealistic views of Wilson on the one hand and the stark realism of Clemenceau, who was determined to see Germany punished.

The French Prime Minister, Georges Clemenceau, controlled his delegation. His chief goal was to weaken Germany militarily, strategically, and economically. Having personally witnessed two German attacks on French soil in the last 40 years, he was adamant that Germany should not be permitted to attack France again. In particular, Clemenceau sought an American and British guarantee of French security in the event of another German attack.

Clemenceau also expressed skepticism and frustration with Wilson’s Fourteen Points: “Mr. Wilson bores me with his fourteen points,” complained Clemenceau. “Why, God Almighty has only ten!” Wilson won a few points by signing a mutual defense treaty with France, but back in Washington he did not present it to the Senate for ratification and it never took effect.

Another alternative French policy was to seek a resumption of harmonious relations with Germany. In May 1919 the diplomat René Massigli was sent on several secret missions to Berlin. During his visits, Massigli offered on behalf of his government to revise the territorial and economic clauses of the upcoming peace treaty.

The Germans rejected the French offers because they considered the French overtures to be a trap to trick them into accepting the Versailles treaty “as is,” and because the German foreign minister, Count Ulrich von Brockdorff-Rantzau, thought that the United States was more likely to reduce the severity of the peace terms than France. It proved to be Lloyd George who pushed for more favorable terms for Germany.

In 1914 Italy remained neutral despite its alliances with Germany and Austria. In 1915 it joined the Allies, motivated by gaining the territories promised by the Allies in the secret Treaty of London: the Trentino, the Tyrol as far as Brenner, Trieste and Istria, most of the Dalmatian coast except Fiume, Valona and a protectorate over Albania, Antalya in Turkey, and possibly colonies in Africa or Asia.

In the meetings of the “Big Four,, in which Orlando’s powers of diplomacy were inhibited by his lack of English, the others were only willing to offer Trentino to the Brenner, the Dalmatian port of Zara and some of the Dalmatian islands. All other territories were promised to other nations and the great powers were worried about Italy’s imperial ambitions. Even though Italy did get most of its demands, Orlando was refused Fiume, most of Dalmatia, and any colonial gain, so he left the conference in a rage.

There was a general disappointment in Italy, which the nationalist and fascist parties used to build the idea that Italy was betrayed by the Allies and refused what was due. This led to the general rise of Italian fascism.

The Empire of Japan sent a large delegation headed by former Prime Minister, Marquess Saionji Kinmochi. It was originally one of the “big five” but relinquished that role because of its slight interest in European affairs. Instead it focused on two demands: the inclusion of their racial equality proposal in the League’s Covenant and Japanese territorial claims with respect to former German colonies, namely Shantung (including Kiaochow) and the Pacific islands north of the Equator (the Marshall Islands, Micronesia, the Mariana Islands, and the Carolines). The Japanese delegation became unhappy after receiving only half of the rights of Germany, and walked out of the conference.