The Fourteen Points was a statement of principles used for peace negotiations following the end World War I, outlined in a January 8, 1918, speech to the United States Congress by President Woodrow Wilson.

Summarize the key themes of the Fourteen Points

idealism
In foreign policy, the belief that a state should make its internal political philosophy the goal of its foreign policy. For example, an idealist might believe that ending poverty at home should be coupled with tackling poverty abroad. U.S. President Woodrow Wilson was an early advocate of this philosophy.
Stab-in-the-back myth
The notion, widely believed in right-wing circles in Germany after 1918, that the German Army did not lose World War I on the battlefield but was instead betrayed by the civilians on the home front, especially the republicans who overthrew the monarchy in the German Revolution of 1918–19. Advocates denounced the German government leaders who signed the Armistice on November 11, 1918, as the “November Criminals.”
the Inquiry
A study group established in September 1917 by Woodrow Wilson to prepare materials for the peace negotiations following World War I. The group, composed of around 150 academics, was directed by presidential adviser Edward House and supervised directly by philosopher Sidney Mezes.
Fourteen Points
A statement of principles used for peace negotiations to end World War I. The principles were outlined in a January 8, 1918, speech on war aims and peace terms to the United States Congress by President Woodrow Wilson.

The Fourteen Points was a statement of principles used for peace negotiations to end World War I. The principles were outlined in a January 8, 1918, speech on war aims and peace terms to the United States Congress by President Woodrow Wilson. Europeans generally welcomed Wilson’s points, but his main Allied colleagues (Georges Clemenceau of France, David Lloyd George of the United Kingdom, and Vittorio Orlando of Italy) were skeptical of the applicability of Wilsonian idealism.

The United States joined the Allied Powers in fighting the Central Powers on April 6, 1917. Its entry into the war had in part been due to Germany’s resumption of submarine warfare against merchant ships trading with France and Britain. However, Wilson wanted to avoid the United States’ involvement in the long-standing European tensions between the great powers; if America was going to fight, he wanted to unlink the war from nationalistic disputes or ambitions. The need for moral aims was highlighted when after the fall of the Russian government, the Bolsheviks disclosed secret treaties made between the Allies. Wilson’s speech also responded to Vladimir Lenin’s Decree on Peace of November 1917 immediately after the October Revolution, which proposed an immediate withdrawal of Russia from the war, called for a just and democratic peace that was not compromised by territorial annexations, and led to the Treaty of Brest-Litovsk on March 3, 1918.

The speech made by Wilson took many domestic progressive ideas and translated them into foreign policy (free trade, open agreements, democracy, and self-determination). The Fourteen Points speech was the only explicit statement of war aims by any of the nations fighting in World War I. Some belligerents gave general indications of their aims, but most kept their post-war goals private.

The immediate cause of the United States’ entry into World War I in April 1917 was the German announcement of renewed unrestricted submarine warfare and the subsequent sinking of ships with Americans on board. But President Wilson’s war aims went beyond the defense of maritime interests. In his War Message to Congress, Wilson declared that the United States’ objective was “to vindicate the principles of peace and justice in the life of the world.” In several speeches earlier in the year, Wilson sketched out his vision of an end to the war that would bring a “just and secure peace,” not merely “a new balance of power.”

President Wilson subsequently initiated a secret series of studies named the Inquiry, primarily focused on Europe and carried out by a group in New York that included geographers, historians, and political scientists; the group was directed by Colonel Edward House. Their job was to study Allied and American policy in virtually every region of the globe and analyze economic, social, and political facts likely to come up in discussions during the peace conference. The group produced and collected nearly 2,000 separate reports and documents plus at least 1,200 maps. The studies culminated in a speech by Wilson to Congress on January 8, 1918, in which he articulated America’s long-term war objectives. The speech was the clearest expression of intention made by any of the belligerent nations and projected Wilson’s progressive domestic policies into the international arena.

The Speech to Congress

The speech, known as the Fourteen Points, was developed from a set of diplomatic points by Wilson and territorial points drafted by the Inquiry’s general secretary, Walter Lippmann, and his colleagues, Isaiah Bowman, Sidney Mezes, and David Hunter Miller. Lippmann’s draft territorial points were a direct response to the secret treaties of the European Allies, which Lippman was shown by Secretary of War Newton D. Baker. Lippman’s task according to House was “to take the secret treaties, analyze the parts which were tolerable, and separate them from those which we regarded as intolerable, and then develop a position which conceded as much to the Allies as it could, but took away the poison…It was all keyed upon the secret treaties.”

In the speech, Wilson directly addressed what he perceived as the causes for the world war by calling for the abolition of secret treaties, a reduction in armaments, an adjustment in colonial claims in the interests of both native peoples and colonists, and freedom of the seas. Wilson also made proposals that would ensure world peace in the future. For example, he proposed the removal of economic barriers between nations, the promise of self-determination for national minorities, and a world organization that would guarantee the “political independence and territorial integrity [of] great and small states alike”— a League of Nations.

Though Wilson’s idealism pervades the Fourteen Points, he also had more practical objectives in mind. He hoped to keep Russia in the war by convincing the Bolsheviks that they would receive a better peace from the Allies, to bolster Allied morale, and to undermine German war support. The address was well received in the United States and Allied nations and even by Bolshevik leader Vladimir Lenin as a landmark of enlightenment in international relations. Wilson subsequently used the Fourteen Points as the basis for negotiating the Treaty of Versailles that ended the war. 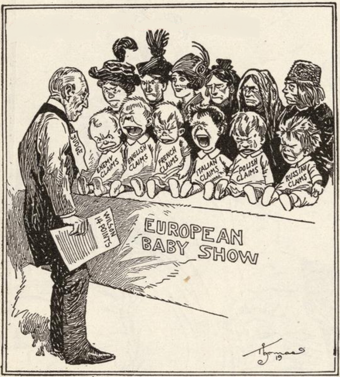 Fourteen Points vs. the Versailles Treaty

President Wilson became physically ill at the beginning of the Paris Peace Conference, allowing French Prime Minister Georges Clemenceau to advance demands substantially different from Wilson’s Fourteen Points. Clemenceau viewed Germany as having unfairly attained an economic victory over France, due to the heavy damage their forces dealt to France’s industries even duringretreat, and expressed dissatisfaction with France’s allies at the peace conference.

The text of the Fourteen Points had been widely distributed in Germany as propaganda prior to the end of the war and was thus well-known by the Germans. The differences between this document and the final Treaty of Versailles fueled great anger. German outrage over reparations and the War Guilt Clause is viewed as a likely contributing factor to the rise of national socialism. At the end of World War I, foreign armies had only entered Germany’s prewar borders twice: the advance of Russian troops into the Eastern border of Prussia, and following the Battle of Mulhouse, the settlement of the French army in the Thann valley. This lack of important Allied incursions contributed to the popularization of the Stab-in-the-back myth in Germany after the war.