One of the most important forms of non-violent competition between the U.S. and the USSR during the Cold War was the Space Race, with the Soviets taking an early lead in 1957 with the launching of Sputnik, the first artificial satellite, followed by the first manned flight.

Sputnik 1
The first artificial Earth satellite; the Soviet Union launched it into an elliptical low Earth orbit on October 4, 1957.
Yuri Gagarin
A Russian Soviet pilot and cosmonaut. He was the first human to journey into outer space when his Vostok spacecraft completed an orbit of the Earth on April 12, 1961.
Apollo 11
The first space flight that landed humans on the Moon

The Space Race was a 20th-century competition between two Cold War rivals, the Soviet Union (USSR) and the United States (U.S.), for supremacy in space flight capability. It had its origins in the missile-based nuclear arms race between the two nations following World War II, aided by captured German missile technology and personnel from their missile program. The technological superiority required for such supremacy was seen as necessary for national security and symbolic of ideological superiority. The Space Race spawned pioneering efforts to launch artificial satellites, unmanned space probes of the Moon, Venus, and Mars, and human space flight in low Earth orbit and to the Moon.

The competition began on August 2, 1955, when the Soviet Union responded to the US announcement four days earlier of intent to launch artificial satellites for the International Geophysical Year by declaring they would also launch a satellite “in the near future.” The Soviet Union beat the U.S. to this with the October 4, 1957 orbiting of Sputnik 1, and later beat the U.S. to the first human in space, Yuri Gagarin, on April 12, 1961. The race peaked with the July 20, 1969, U.S. landing of the first humans on the Moon with Apollo 11. The USSR tried but failed manned lunar missions, and eventually cancelled them and concentrated on Earth orbital space stations.

A period of détente followed with the April 1972 agreement on a cooperative Apollo–Soyuz Test Project, resulting in the July 1975 rendezvous in Earth orbit of a U.S. astronaut crew with a Soviet cosmonaut crew. The end of the Space Race is harder to pinpoint than its beginning, but it was over by the December, 1991 dissolution of the Soviet Union, after which true space flight cooperation between the U.S. and Russia began.

In 1955, with both the United States and the Soviet Union building ballistic missiles that could be used to launch objects into space, the “starting line” was drawn for the Space Race. In separate public announcements four days apart, both nations declared they would launch artificial Earth satellites by 1957 or 1958.

In February 1957, chief Soviet rocket scientist Sergei Korolev sought and received permission from the Council of Ministers to create a prosteishy sputnik (PS-1), or “simple satellite.”

Korolev was buoyed by the first successful launches of his R-7 rocket in August and September, which paved the way for him to launch his sputnik. On Friday, October 4, 1957, at exactly 10:28:34 pm Moscow time, the R-7 with the now named Sputnik 1 satellite lifted off the launch pad, placing the artificial “moon” into orbit a few minutes later. This “fellow traveler,” as the name is translated in English, was a small, beeping ball less than two feet in diameter and weighing less than 200 pounds. But the celebrations were muted at the launch control center until the down-range far east tracking station at Kamchatka received the first distinctive beep … beep … beep sounds from Sputnik 1’s radio transmitters, indicating that it was en route to completing its first orbit.

The Soviet success raised a great deal of concern and fear in the United States. The USSR used ICBM technology to launch Sputnik into space. This essentially gave the Soviets two propaganda victories at once (sending the satellite into space and proving the distance capabilities of their missiles). This proved that the Soviets had rockets capable of sending nuclear weapons from Russia to Europe and even North America. This was the most immediate threat posed by the launch of Sputnik 1. Not only did the Soviet Union have this ability, the United States did not. America, a land with a history of geographical security, suddenly seemed vulnerable. Overall, what caused the fear for the American people was not the satellite itself but more so the rocket that put Sputnik into orbit.

On January 31, 1958, nearly four months after the launch of Sputnik 1, von Braun and the United States successfully launched its first satellite on a four-stage Juno I rocket derived from the US Army’s Redstone missile, at Cape Canaveral. 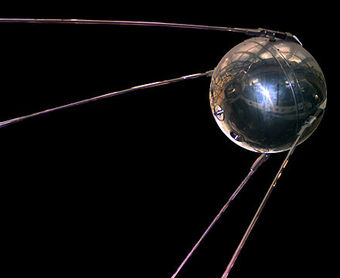 Sputnik 1: Soviet Union achieved an early lead in the space race by launching the first artificial satellite Sputnik 1 (replica) in 1957.

By 1959, American observers believed the Soviet Union would be the first to get a human into space because of the time needed to prepare for Mercury’s first launch. On April 12, 1961, the USSR surprised the world again by launching Yuri Gagarin into a single orbit around the Earth in a craft they called Vostok 1. They dubbed Gagarin the first cosmonaut, roughly translated from Russian and Greek as “sailor of the universe.” Although he had the ability to take over manual control of his capsule in an emergency by opening an envelope he had in the cabin that contained a code that could be typed into the computer, it was flown in automatic mode as a precaution; medical science at that time did not know what would happen to a human in the weightlessness of space. Vostok 1 orbited the Earth for 108 minutes and made its reentry over the Soviet Union, with Gagarin ejected from the spacecraft at 23,000 feet and landing by parachute.

Gagarin became a national hero of the Soviet Union and the Eastern Bloc, and a worldwide celebrity. Moscow and other cities in the USSR held mass demonstrations, second in scale only to the World War II Victory Parade of 1945.

Race to the Moon

Before Gagarin’s flight, U.S. President John F. Kennedy’s support for America’s manned space program was lukewarm. Jerome Wiesner of MIT, who served as a science advisor to presidents Eisenhower and Kennedy and opposed manned space exploration, remarked, “If Kennedy could have opted out of a big space program without hurting the country in his judgement, he would have.” Gagarin’s flight changed this; now Kennedy sensed the humiliation and fear of the American public over the Soviet lead. Kennedy ultimately decided to pursue what became the Apollo program, and on May 25 took the opportunity to ask for Congressional support in a Cold War speech titled “Special Message on Urgent National Needs.” Khrushchev responded to Kennedy’s implicit challenge with silence, refusing to publicly confirm or deny if the Soviets were pursuing a “Moon race.” As later disclosed, they did so in secret over the next nine years.

After Kennedy’s death, President Johnson steadfastly pursued the Gemini and Apollo programs, promoting them as Kennedy’s legacy to the American public.

In 1967, both nations faced serious challenges that brought their programs to temporary halts. Both had been rushing at full-speed toward the first piloted flights of Apollo and Soyuz without paying due diligence to growing design and manufacturing problems. The results proved fatal to both pioneering crews.

The United States recovered from the Apollo 1 fire, fixing the fatal flaws in an improved version of the Block II command module. The US proceeded with unpiloted test launches of the Saturn V launch vehicle (Apollo 4 and Apollo 6) and the Lunar Module (Apollo 5) during the latter half of 1967 and early 1968.

Unknown to the Americans, the Soviet Moon program was in deep trouble. After two successive launch failures of the N1 rocket in 1969, Soviet plans for a piloted landing suffered delay. The launch pad explosion of the N-1 on July 3, 1969 was a significant setback.

Apollo 11 was prepared with the goal of a July landing in the Sea of Tranquility. The crew, selected in January 1969, consisted of commander (CDR) Neil Armstrong, Command Module Pilot (CMP) Michael Collins, and Lunar Module Pilot (LMP) Edwin “Buzz” Aldrin. They trained for the mission until just before the launch day. On July 16, 1969, at exactly 9:32 am EDT, the Saturn V rocket, AS-506, lifted off from Kennedy Space Center Launch Complex 39 in Florida.

The trip to the Moon took just over three days. After achieving orbit, Armstrong and Aldrin transferred into the Lunar Module named Eagle, and after a landing gear inspection by Collins remaining in the Command/Service Module Columbia began their descent. After overcoming several computer overload alarms caused by an antenna switch left in the wrong position and a slight downrange error, Armstrong took over manual flight control at about 590 feet and guided the Lunar Module to a safe landing spot at 20:18:04 UTC, July 20, 1969. The first humans on the Moon waited six hours before leaving their craft. At 02:56 UTC, July 21, Armstrong became the first human to set foot on the Moon. The first step was witnessed by at least one-fifth of the population of Earth, or about 723 million people. His first words when he stepped off the LM’s landing footpad were, “That’s one small step for man, one giant leap for mankind.” 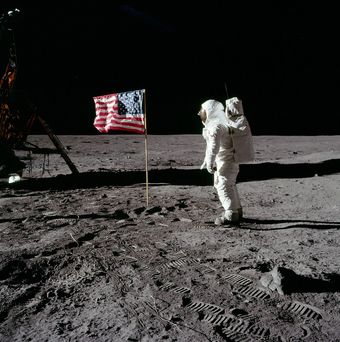 Buzz Salutes the US Flag: Buzz Aldrin during the first Moon walk in 1969. After Neil Armstrong was the first person to walk on the Moon, Aldrin joined him on the surface almost 20 minutes later. Altogether, they spent just under two and one-quarter hours outside their craft. Armstrong took this photo.