The United States and the Soviet Union increasingly competed for influence by proxy in the Third World as decolonization gained momentum in the 1950s and early 1960s.

Describe some of the ways in which the U.S. and the USSR competed for influence outside of Europe

John Foster Dulles
Served as U.S. Secretary of State under Republican President Dwight D. Eisenhower from 1953 to 1959 and was a significant figure in the early Cold War era, advocating an aggressive stance against Communism throughout the world.
decolonization
The undoing of colonialism, the withdrawal from its colonies of a colonial power; the acquisition of political or economic independence by such colonies. The term refers particularly to the dismantlement, in the years after World War II of the colonial empires established prior to World War I throughout the world. This means not only the complete “removal of the domination of non-indigenous forces” within the geographical space and institutions of the colonized, but also to the “decolonizing of the mind” from the colonizer’s ideas of the colonized as inferior.
Non-Aligned Movement
A group of states that are not formally aligned with or against any major power bloc, especially during the Cold War.

The Korean War marked a shift in the focal point of the Cold War from postwar Europe to East Asia. After this point, proxy battles in the Third World became an important arena of superpower competition.

The Eisenhower administration adjusted U.S. policy to the impact of decolonization, shifting the focus away from war-torn Europe. By the early 1950s, the NATO alliance had integrated Western Europe into the system of mutual defense pacts, providing safeguards against subversion or neutrality in the bloc. The Marshall Plan had rebuilt a functioning Western economic system, thwarting the electoral appeal of the radical left. When economic aid ended the dollar shortage and stimulated private investment for postwar reconstruction, sparing the U.S. from a crisis of over-production and maintaining demand for U.S. exports, the Eisenhower administration began to focus on other regions.

The combined effects of two great European wars weakened the political and economic domination of Latin America, Asia, Africa, and the Middle East by European powers. This led to a series of waves of African and Asian decolonization following the Second World War; a world dominated for more than a century by Western imperialist colonial powers was transformed into a world of emerging African, Middle Eastern, and Asian nations. The sheer number of nation states increased drastically.

The Cold War placed immense pressure on developing nations to align with one of the superpower factions. Both promised substantial financial, military, and diplomatic aid in exchange for an alliance, in which issues like corruption and human rights abuses were overlooked or ignored. When an allied government was threatened, the superpowers were often prepared and willing to intervene.

In such an international setting, the Soviet Union propagated a role as the leader of the “anti-imperialist” camp, currying favor in the Third World as being a more staunch opponent of colonialism than many independent nations in Africa and Asia. Khrushchev broadened Moscow’s policy by establishing new relations with India and other key non-aligned, non-communist states throughout the Third World. Many countries in the emerging non-aligned movement developed a close relation with Moscow.

In an exercise of the new “rollback” polices, acting on the doctrines of Dulles, Eisenhower thwarted Soviet intervention, using the CIA to overthrow unfriendly governments. In the Arab world, the focus was pan-Arab nationalism. U.S. companies had already invested heavily in the region, which contained the world’s largest oil reserves. The U.S. was concerned about the stability and friendliness of governments in the region, upon which the health of the U.S. economy increasingly grew to depend.

The Eisenhower administration attempted to formalize its alliance system through a series of pacts. Its East Asian allies were joined into the Southeast Asia Treaty Organization (SEATO) while friends in Latin America were placed in the Organization of American States. The ANZUS alliance was signed between the Australia, New Zealand, and the US. None of these groupings was as successful as NATO had been in Europe.

John Foster Dulles, a rigid anti-communist, focused aggressively on Third World politics. He intensified efforts to integrate the entire noncommunist Third World into a system of mutual defense pacts, traveling almost 500,000 miles to cement new alliances. Dulles initiated the Manila Conference in 1954, resulting in the SEATO pact that united eight nations (either located in Southeast Asia or with interests there) in a neutral defense pact. This treaty was followed in 1955 by the Baghdad Pact, later renamed the Central Treaty Organization (CENTO), uniting the “northern tier” countries of the Middle East—Turkey, Iraq, Iran, and Pakistan—in a defense organization.

Many Third World nations did not want to align themselves with either of the superpowers. The non-aligned movement, led by India, Egypt, and Austria, attempted to unite the third world against what was seen as imperialism by both the East and the West.

Dulles, along with most U.S. foreign policy-makers of the era, considered many Third World nationalists and “revolutionaries” as essentially under the influence, if not control, of the Warsaw Pact.

The Eisenhower-Dulles approach to foreign policy sought to overthrow unfriendly governments in a covert way.

Throughout much of Latin America, reactionary oligarchies ruled through their alliances with the military elite and United States. Although the nature of the U.S. role in the region was established many years before the Cold War, the Cold War gave U.S. interventionism a new ideological tinge. By the mid-20th century, much of the region passed through a higher state of economic development, which bolstered the power and ranks of the lower classes. This made calls for social change and political inclusion more pronounced, posing a challenge to the strong U.S. influence over the region’s economies. By the 1960s, Marxists gained increasing influence throughout the regions, prompting fears in the United States that Latin American instability posed a threat to U.S. national security.

Throughout the Cold War years, the U.S. acted as a barrier to socialist revolutions and targeted populist and nationalist governments aided by the communists. The CIA overthrew other governments suspected of turning pro-communist, such as Guatemala in 1954 under Jacobo Arbenz Guzman. The CIA Operation PBSUCCESS eventually led to the 1954 coup that removed Arbenz from power. The operation drew on a plan first considered in 1951 to oust Arbenz, named Operation PBFORTUNE. Arbenz, who was supported by some local communists, was ousted shortly after he had redistributed 178,000 acres of United Fruit Company land in Guatemala. United Fruit had long monopolized the transportation and communications region there along with the main export commodities, and played a major role in Guatemalan politics. Arbenz was out shortly afterwards, and Guatemala came under control of a repressive military regime.

Future Latin American revolutionaries shifted to guerrilla tactics, particularly following the Cuban Revolution. Arbenz fell when his military had deserted him. Since then, some future Latin American social revolutionaries and Marxists, most notably Fidel Castro and the Sandinistas in Nicaragua, made the army and governments parts of a single unit and eventually set up single-party states. Overthrowing such regimes would require a war rather than a simple CIA operation, the landing of Marines, or a crude invasion scheme like the Bay of Pigs Invasion.

One of the first decolonized nations to request Eastern aid was the Democratic Republic of the Congo under Patrice Lumumba. A large number of United Nations peacekeepers from NATO nations and other NATO allies had been in the Congo since independence was established from Belgium in 1960. The U.S. used them to shut down air traffic and prevent Eastern arms and troops from getting into the country. However, some Eastern weapons managed to get in from other countries. The peacekeepers decided to remove Lumumba and backed Colonel Joseph Mobutu in a coup in which Lumumba was killed. The Congolese crisis had the effect of alienating from both the West and the East some in the third world who saw the East as weak and impotent and the West unethical and unscrupulous. 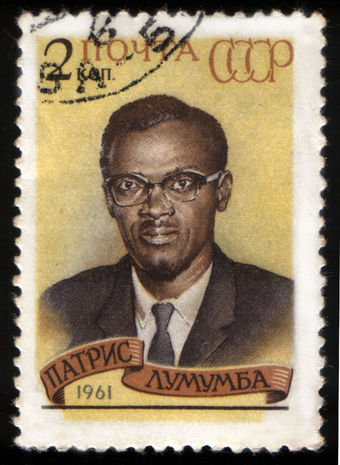 Patrice Lumumba: 1961 Soviet stamp commemorating Patrice Lumumba, prime minister of the Republic of the Congo, who was killed during a U.S. backed coup d’état.

In 1953, President Eisenhower’s CIA implemented Operation Ajax, a covert operation aimed at the overthrow of the Iranian prime minister, Mohammad Mosaddegh. The popularly elected and non-aligned Mosaddegh had been a Middle Eastern nemesis of Britain since nationalizing the British-owned Anglo-Iranian Oil Company in 1951. Winston Churchill told the United States that Mosaddegh was “increasingly turning towards communism.” The pro-Western shah, Mohammad Reza Pahlavi, assumed control as an autocratic monarch. The shah’s policies included banning the communist Tudeh Party and general suppression of political dissent by SAVAK, the shah’s domestic security and intelligence agency.