Just as the United States’ wealth is increasingly concentrated among its richest citizens while the middle class slowly disappears, global inequality is concentrating resources in certain nations and is significantly affecting the opportunities of individuals in poorer and less powerful countries. In fact, a recent Oxfam (2014) report that suggested the richest eighty-five people in the world are worth more than the poorest 3.5 billion combined. The GINI coefficient measures income inequality between countries using a 100-point scale on which 1 represents complete equality and 100 represents the highest possible inequality. In 2007, the global GINI coefficient that measured the wealth gap between the core nations in the northern part of the world and the mostly peripheral nations in the southern part of the world was 75.5 percent (Korseniewicz and Moran 2009). But before we delve into the complexities of global inequality, let’s consider how the three major sociological perspectives might contribute to our understanding of it.

The functionalist perspective is a macroanalytical view that focuses on the way that all aspects of society are integral to the continued health and viability of the whole. A functionalist might focus on why we have global inequality and what social purposes it serves. This view might assert, for example, that we have global inequality because some nations are better than others at adapting to new technologies and profiting from a globalized economy, and that when core nation companies locate in peripheral nations, they expand the local economy and benefit the workers.

Conflict theory focuses on the creation and reproduction of inequality. A conflict theorist would likely address the systematic inequality created when core nations exploit the resources of peripheral nations. For example, how many U.S. companies take advantage of overseas workers who lack the constitutional protection and guaranteed minimum wages that exist in the United States? Doing so allows them to maximize profits, but at what cost?

The symbolic interaction perspective studies the day-to-day impact of global inequality, the meanings individuals attach to global stratification, and the subjective nature of poverty. Someone applying this view to global inequality would probably focus on understanding the difference between what someone living in a core nation defines as poverty (relative poverty, defined as being unable to live the lifestyle of the average person in your country) and what someone living in a peripheral nation defines as poverty (absolute poverty, defined as being barely able, or unable, to afford basic necessities, such as food).

While stratification in the United States refers to the unequal distribution of resources among individuals, global stratification refers to this unequal distribution among nations. There are two dimensions to this stratification: gaps between nations and gaps within nations. When it comes to global inequality, both economic inequality and social inequality may concentrate the burden of poverty among certain segments of the earth’s population (Myrdal 1970). As the chart below illustrates, people’s life expectancy depends heavily on where they happen to be born.

Most of us are accustomed to thinking of global stratification as economic inequality. For example, we can compare the United States’ average worker’s wage to America’s average wage. Social inequality, however, is just as harmful as economic discrepancies. Prejudice and discrimination—whether against a certain race, ethnicity, religion, or the like—can create and aggravate conditions of economic equality, both within and between nations. Think about the inequity that existed for decades within the nation of South Africa. Apartheid, one of the most extreme cases of institutionalized and legal racism, created a social inequality that earned it the world’s condemnation.

Gender inequity is another global concern. Consider the controversy surrounding female genital mutilation. Nations that practice this female circumcision procedure defend it as a longstanding cultural tradition in certain tribes and argue that the West shouldn’t interfere. Western nations, however, decry the practice and are working to stop it.

Inequalities based on sexual orientation and gender identity exist around the globe. According to Amnesty International, a number of crimes are committed against individuals who do not conform to traditional gender roles or sexual orientations (however those are culturally defined). From culturally sanctioned rape to state-sanctioned executions, the abuses are serious. These legalized and culturally accepted forms of prejudice and discrimination exist everywhere—from the United States to Somalia to Tibet—restricting the freedom of individuals and often putting their lives at risk (Amnesty International 2012).

Capital Flight, Outsourcing, and Jobs in the United States 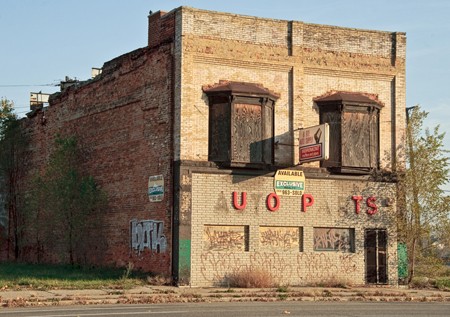 This dilapidated auto supply store in Detroit is a victim of auto industry outsourcing. (Photo courtesy of Bob Jagendorf/flickr)

Capital flight describes jobs and infrastructure moving from one nation to another. Look at the U.S. automobile industry. In the early twentieth century, the cars driven in the United States were made here, employing thousands of workers in Detroit and in the companies that produced everything that made building cars possible. However, once the fuel crisis of the 1970s hit and people in the United States increasingly looked to imported cars with better gas mileage, U.S. auto manufacturing began to decline. During the 2007–2009 recession, the U.S. government bailed out the three main auto companies, underscoring their vulnerability. At the same time, Japanese-owned Toyota and Honda and South Korean Kia maintained stable sales levels. 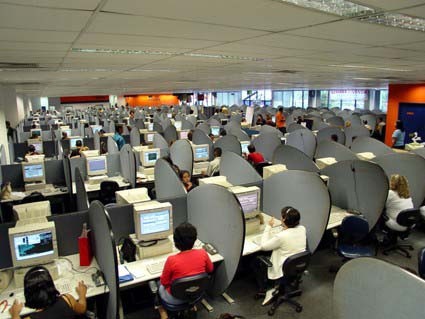 Is this international call center the wave of the future? (Photo courtesy of Vilma.com/flickr)

Capital flight also occurs when services (as opposed to manufacturing) are relocated. Chances are if you have called the tech support line for your cell phone or Internet provider, you’ve spoken to someone halfway across the globe. This professional might tell you her name is Susan or Joan, but her accent makes it clear that her real name might be Parvati or Indira. It might be the middle of the night in that country, yet these service providers pick up the line saying, “Good morning,” as though they are in the next town over. They know everything about your phone or your modem, often using a remote server to log in to your home computer to accomplish what is needed. These are the workers of the twenty-first century. They are not on factory floors or in traditional sweatshops; they are educated, speak at least two languages, and usually have significant technology skills. They are skilled workers, but they are paid a fraction of what similar workers are paid in the United States. For U.S. and multinational companies, the equation makes sense. India and other semi-peripheral countries have emerging infrastructures and education systems to fill their needs, without core nation costs.

As services are relocated, so are jobs. In the United States, unemployment is high. Many college-educated people are unable to find work, and those with only a high school diploma are in even worse shape. We have, as a country, outsourced ourselves out of jobs, and not just menial jobs, but white-collar work as well. But before we complain too bitterly, we must look at the culture of consumerism that we embrace. A flat screen television that might have cost $1,000 a few years ago is now $350. That cost savings has to come from somewhere. When consumers seek the lowest possible price, shop at big box stores for the biggest discount they can get, and generally ignore other factors in exchange for low cost, they are building the market for outsourcing. And as the demand is built, the market will ensure it is met, even at the expense of the people who wanted it in the first place.

Pretend you are a sociologist studying global inequality by looking at child labor manufacturing Barbie dolls in China. What do you focus on? How will you find this information? What theoretical perspective might you use?

first world:
a term from the Cold War era that is used to describe industrialized capitalist

GINI coefficient:
a measure of income inequality between countries using a 100-point scale, in which 1 represents complete equality and 100 represents the highest possible inequality

global inequality:
the concentration of resources in core nations and in the hands of a wealthy minority

global feminization of poverty:
a pattern that occurs when women bear a disproportionate percentage of the burden of poverty

global stratification:
the unequal distribution of resources between countries

second world:
a term from the Cold War era that describes nations with moderate economies and standards of living

third world:
a term from the Cold War era that refers to poor, unindustrialized countries