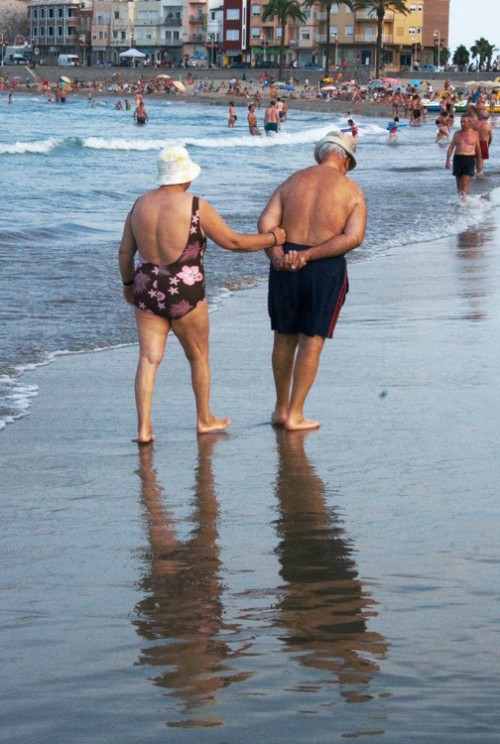 Aging is accompanied by a host of biological, social, and psychological changes. (Photo courtesy of Michael Cohen/flickr)

Male or female, growing older means confronting the psychological issues that come with entering the last phase of life. Young people moving into adulthood take on new roles and responsibilities as their lives expand, but an opposite arc can be observed in old age. What are the hallmarks of social and psychological change?

Retirement—the withdrawal from paid work at a certain age—is a relatively recent idea. Up until the late nineteenth century, people worked about sixty hours a week until they were physically incapable of continuing. Following the American Civil War, veterans receiving pensions were able to withdraw from the workforce, and the number of working older men began declining. A second large decline in the number of working men began in the post-World War II era, probably due to the availability of Social Security, and a third large decline in the 1960s and 1970s was probably due to the social support offered by Medicare and the increase in Social Security benefits (Munnell 2011).

In the twenty-first century, most people hope that at some point they will be able to stop working and enjoy the fruits of their labor. But do we look forward to this time or fear it? When people retire from familiar work routines, some easily seek new hobbies, interests, and forms of recreation. Many find new groups and explore new activities, but others may find it more difficult to adapt to new routines and loss of social roles, losing their sense of self-worth in the process.

Each phase of life has challenges that come with the potential for fear. Erik H. Erikson (1902–1994), in his view of socialization, broke the typical life span into eight phases. Each phase presents a particular challenge that must be overcome. In the final stage, old age, the challenge is to embrace integrity over despair. Some people are unable to successfully overcome the challenge. They may have to confront regrets, such as being disappointed in their children’s lives or perhaps their own. They may have to accept that they will never reach certain career goals. Or they must come to terms with what their career success has cost them, such as time with their family or declining personal health. Others, however, are able to achieve a strong sense of integrity and are able to embrace the new phase in life. When that happens, there is tremendous potential for creativity. They can learn new skills, practice new activities, and peacefully prepare for the end of life.

For some, overcoming despair might entail remarriage after the death of a spouse. A study conducted by Kate Davidson (2002) reviewed demographic data that asserted men were more likely to remarry after the death of a spouse and suggested that widows (the surviving female spouse of a deceased male partner) and widowers (the surviving male spouse of a deceased female partner) experience their postmarital lives differently. Many surviving women enjoyed a new sense of freedom, since they were living alone for the first time. On the other hand, for surviving men, there was a greater sense of having lost something, because they were now deprived of a constant source of care as well as the focus of their emotional life.