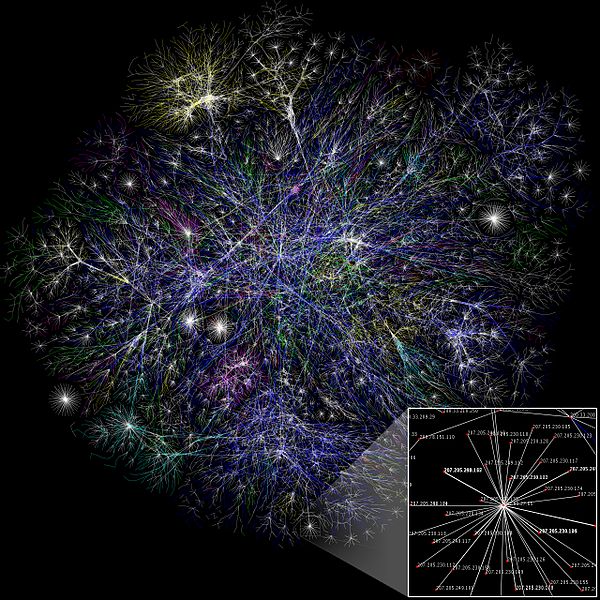 The Internet is a large group of computers that are connected to each other. The Internet is used to send information quickly between computers around the world. It has millions of smaller domestic, academic, business, and governmentnetworks and websites, which together carry many different kinds of information (facts and details) and services. So in other words, the Internet is a network of networks.

The internet was made in the United States by the “United States Department of Defense Advanced Research Projects Agency” (ARPA). It was first connected in October, 1969.[1] The World Wide Web was created at CERN in Switzerland in 1989 by a British (UK) man named Tim Berners-Lee.

Today, people can pay money to access the Internet from Internet Service Providers. Some services on the Internet cost nothing to use. Sometimes the people who offer these free services use advertising to make money from them. The alternative (other) name, “Net” came from “Inter(net).”

Services on the Internet

The Internet is used for many things, such as electronic mail, online chat, file transfer, and the interlinked web pages and other documents of the World Wide Web.

The most used service on the Internet is the World Wide Web (which is also called the “Web”). The Web contains websites, blogs, and also wikis likeWikipedia. Webpages on the internet can be seen and read by anyone (unless the page needs a password, or it is blocked).

The second major use of the Internet is to send and receive e-mail. E-mail is private and goes from one user to another. Instant messaging (such as AIM orICQ) is similar to email, but allows two or more people to chat to each other much faster.

Some governments think the Internet is a bad thing, and block all or part of it. For example, the Chinese government thinks that Wikipedia is bad. Many times no one in China can read it or add to it.[2] Some parents block parts of the Internet they think are bad for children to see. Well-known examples of the whole Internet being blocked are in North Korea[3] and Myanmar.

Dangers on the Internet

The Internet can also be a dangerous place. Information that people put on the Internet is not always checked, and some may not be true. Some may even be harmful. Also, if someone sends information through the internet, sometimes other people can read it even when they are not supposed to. For example,Facebook has had some problems with privacy settings. A person can post information on a website, but this is often a bad idea unless the person is very sure of what they are doing. A good way to check for a secure website is to make sure the URL starts with https:// instead of http://, this means it is a secure site. (This only stops other people from reading what a user types. It does not mean the website is safe) 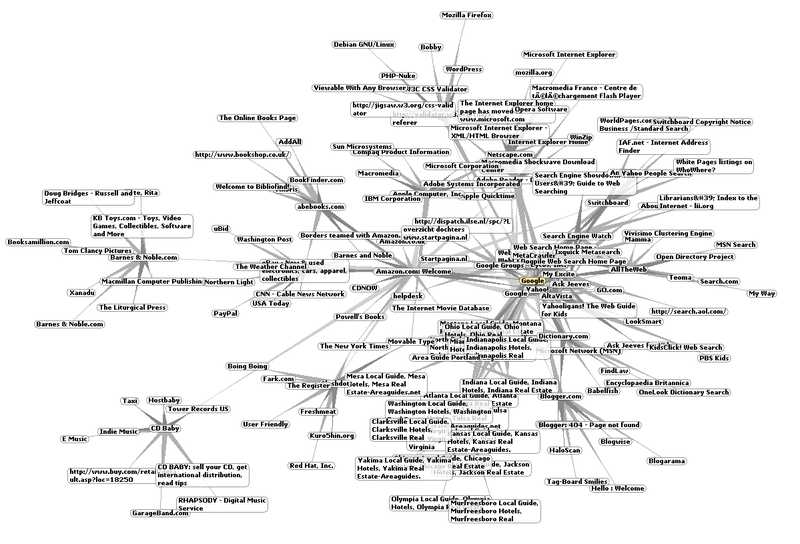 The URL makes sure it goes to the right website. It is easy to make a mistake as there are lots of websites. This picture shows the resources near Google.

Uniform Resource Locator (URL) is another name for a web address. URLs are made of letters, numbers and other symbols in a standard form.[5] People use them on computers by clicking a pre-prepared link or typing one into a web browser, to make the computer fetch and show some specific resource (usually a web page) from another computer (web server) on the Internet.

In some cases, the URL may also contain

The URL of this page is http://simple.wikipedia.org/w/index.php?title=Uniform_Resource_Locator

A shorter form, called a “relative” URL, is used when a computer could correctly fill in the full (“absolute”) URL from context. For example /wiki/URL only works for a link on wikipedia to this page on wikipedia. Absolute URLs can be shared outside of computers, even with little or no explanation.

These are at the end of the domain name which has a period mark before it. At first there were six main extensions:

An Internet service provider, or ISP maintains, installs and provides internet connection to residential or commercial areas. Some examples of ISP clients include – homes, coffee shops, hotels, libraries, offices. They usually charge a fee for installing the connection and a monthly fee for maintaining it.

The internet is basically a web of interconnected networks – which are maintained by a huge number of different ISP’s. They keep connected around the world by giving their clients access to other ISP networks. This is called peering.

ISP’s have other services as well – Sometimes they offer e-mail and or website hosting.

There are different types of connections ISP’s can offer as well, some might be dial-up, DSL, through optical fiber wires, through a cable televisionconnection, wireless, or even satellite, usually in remote areas. Dial-up is the slowest connection, while a direct fiber-optic connection is usually the fastest.

Dial-up internet access, usually just called Dial-up, is a slow way of connecting to the Internet by using a telephone line. A modem is connected between a computer and a telephone line and then the modem is instructed to dial the phone number of an Internet service provider (ISP) to connect to the Internet. The ISP must be a dial-up service provider with several dial-up modems waiting to accept dial-up calls. This kind of internet is slower than DSL. It is not widely used in the United States, where only one out of every ten people still use it. In most parts of the world, the dial-up has been replaced by broadband.

Dial-up was the most common way of connecting to the internet from its creation until around the middle of the 2000s. 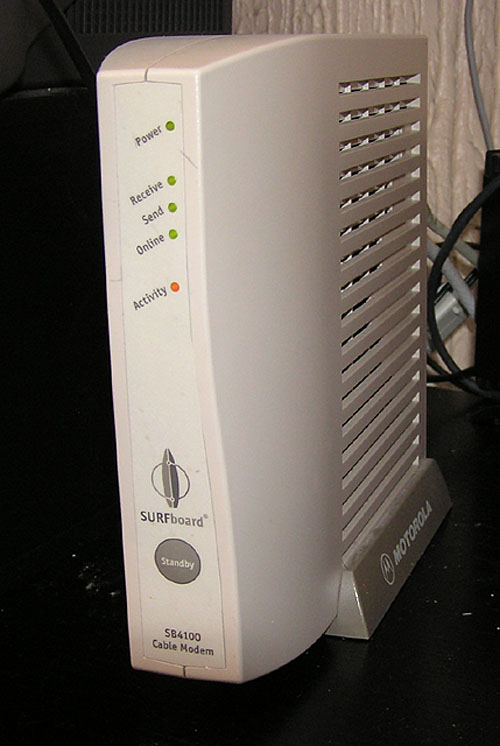 A cable modem is a modem that can be used to deliver (usually digital) data over Cable television infrastructure. Most of the time, cable modems are used to get access to the internet using the cable television network. To do this, cable modems use some channels of the Cable TV network. A cable modem usually translates the signals it receives from Ethernet or USB into Radio frequency channels. With Voice over IP (VoIP) technology, most cable modems can now also provide telephone lines.

In terms of network technology, a cable modem is a network bridge. It operates at layer 2 of the OSI model.

DSL (for Digital Subscriber Loop or Digital Subscriber Line) is the base for a number of technologies used to transmitdigital data over a telephone line. Telephone lines only transmit a limited spectrum of signals (roughly 20 Hertz to 20,000 Hertz, for voice). This means that the other frequencies can be used to transmit data. The data is multiplexed onto the telephone line. At both ends, a device called Splitter (or DSL filter) separates the data part and the telephony part. DSL provides the physical layer, the lowest layer of the OSI Model. ATM or Ethernet is used as data link layer, IP at the network layer.

Most DSL lines of consumers are asymmetric. This is called ADSL and means it has a higher bit rate in one direction than in the other. 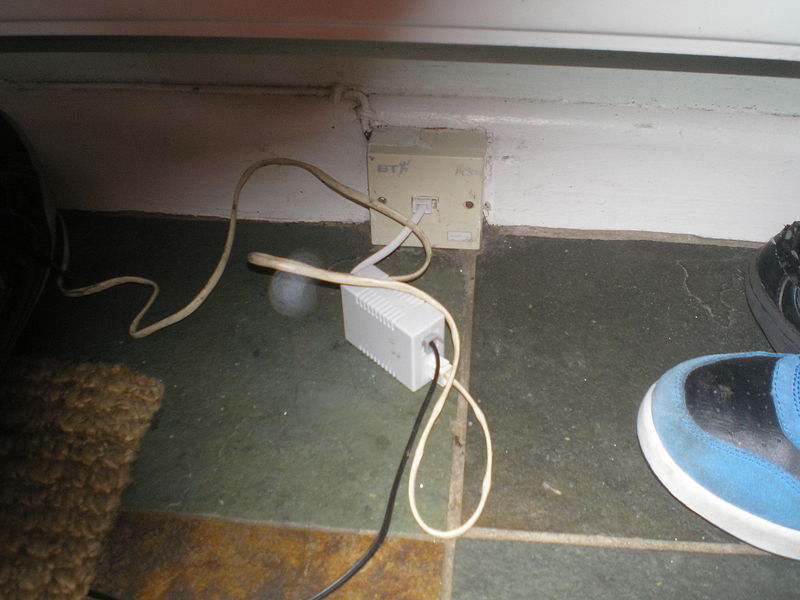 DSL (or VDSL, Very highspeed Digital Subscriber Line) typically works by dividing the frequencies used in a single phone line into two primary “bands.” The ISP data is carried over the high-frequency band (25 kHz and above) while the voice is carried over the lower-frequency band (4 kHz and below). The user typically installs a DSL filter on each phone. This removes the high frequencies from the phone line, so that the phone only sends or receives the lower frequencies (the human voice). The DSL modem and the normal telephone equipment can be used on the line at the same time without interference from each other. 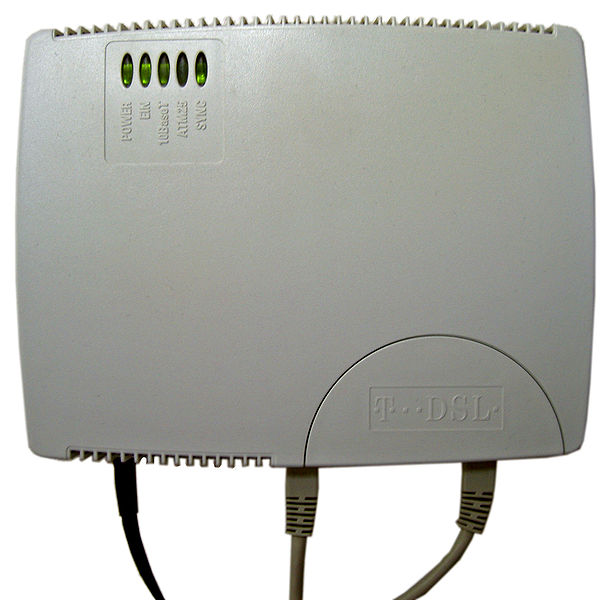 The customer end of the connection consists of a Terminal Adaptor (a DSL modem). This converts data from the digital signals used by computers into a voltage signal of a suitable frequency range which is then applied to the phone line.

In some DSL variations (for example, HDSL), the terminal adapter is directly connected to the computer via a serial interface, usingcommunication protocols such as RS-232 or V.35. In other cases (particularly ADSL), it is common for the customer equipment to be integrated with other functions, such as routing, firewalling, or other application-specific hardware and software. In this case, the entire equipment is usually referred to as a DSL router or DSL gateway.