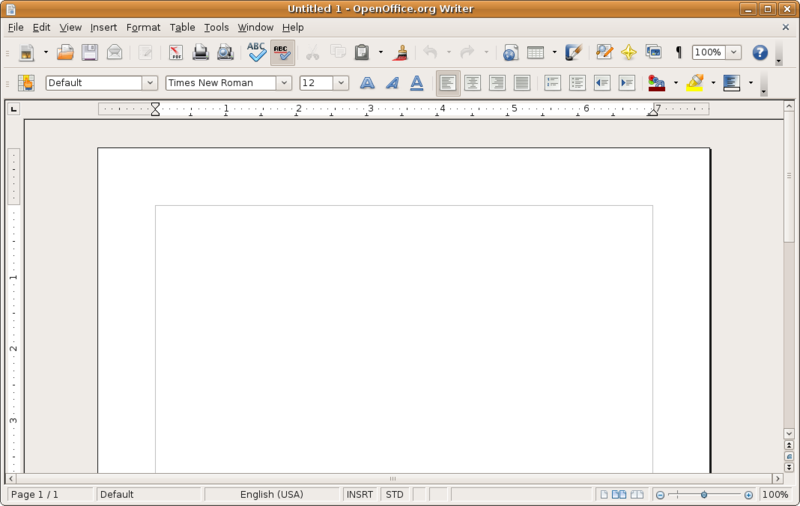 A screenshot of the OpenOffice.org Writer software

The word software was first used in the late 1960s to show the difference from computer hardware, which are the parts of a machine that can be seen and touched. Software is the instructions that the computer follows. Before compact discs (CDs) or Internet downloads, software came on “soft media” like paper punch cards, magnetic discs or magnetic tape.

If you compare computers to music and musical instruments you can think of hardware as being the instruments and software being the musical notes.

The word firmware is sometimes used to describe a style of software that is made specially for a particular type of computer (or other electronic device) and is usually stored on a Flash memory or ROM chip in the computer. Firmware usually refers to a piece of software that directly controls a piece of hardware, for example the firmware for a CD drive or the firmware for a modem.

Computer software can be put into categories based on common function, type, or field of use. There are three broad classifications:

What an Operating System Does

The earliest electronic computers did not have any operating system. If the user wanted to change what the computer was doing, the user had to open the back panel on the (then very large) computer, and change how the wires were connected. Changing what the computer did was very time consuming and required an expert.

Later, computer scientists decided to have the wires stay as they were, and feed instructions to the computer with punched cards (cards with holes that represented instructions) or magnetic tape. The computer would store the instructions in some kind of memory. This way of operating a computer is called thevon Neumann architecture.

Still, computers of the time generally only had enough memory to “remember” one program at a time. If the user wanted the computer to run a different program, the user had to wipe out the first program from memory and then load another program into memory.

Computer operators and computer scientists grew tired of carrying around large stacks of punch cards. They also wanted computers to run more than one program at a time. As years of work changed or replaced computers to have more memory, computer operators and computer scientists decided that some computers could hold several programs in its memory. The computer user could then simply choose which program the user wanted to run. Running a computer this way requires a “boss” program that controls all the other programs, and asks the user what program the user wants to run. Such a boss program is called an operating system.

Modern desktop or laptop computers need an operating system so that they can operate. They are usually sold with it already installed. Operating systems normally start up automatically when the user turns on the computer.

Operating systems can also have other differences:

In computing, a utility is a program or module which is used to give a general-purpose result, for many different uses. A utility is intended for a wide range of users, rather than an “app” (application program) which might be intended to serve a specific purpose for specific users.

For example, a utility program may handle computer files or guard against computer viruses.

People use the word “boot” to mean “to start a computer” or other device with electronics built in. For example, if a person wants to ask a friend to turn on a satellite phone, they would say “could you boot up the satellite phone?”.

Most operating systems call the first device it uses a boot device. This is because the computer is making itself go, as in the idiom. When we start a computer, we can often see the simple instructions the computer uses to start, then more complicated pictures or software.

The phrase “to boot” in this meaning is short for “to bootstrap”. This use is part of net jargon along with similar multi-use words like net or web. Often the computer is just called a box, so a phrase like “to boot the box” means “to start the computer”.

The term “reboot” can also be used in a different context to mean a restarting of a storyline established in previous iterations of a series of fiction.

To “reboot” is not only a computer reference, but is also sometime referenced in giving birth to cows.