The Systems Theory Paradigm represents a dramatic theoretical shift from empirical laws and human rules approaches for understanding communication. Systems thinking began in the social and physical sciences in the 19th century with George Hegel (Kaufmann), and was more fully developed by biologist Ludwig von Bertalanffy in the 20th century.

Von Bertalanffy argued that everything is interconnected and therefore, we should study interconnectedness as a means of understanding the world. This departs from empirical approaches that traditionally study phenomena by looking at individual components. Conversations surrounding global warming are among the most recognizable ideas of systems theory. In effect, those that warn us of global warming tell us that all of our actions have an impact on one another and our environment, and thus, we must be mindful of what we do, or we will continue to cause harm to everything on earth.

Bike and Surf California — as written for www.Phoresia.org 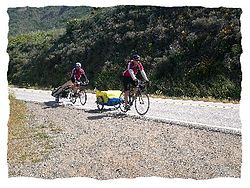 It started off as a simple idea. My friend Mike and I wanted to go on a surf trip. Nothing strange about that! However, we have grown increasingly alarmed at how much we drive around looking for surf and the environmental impact this has. It’s been much easier to recognize the amount of gas we burn as fuel prices have now pushed $5.00 a gallon in our area. As a result of our increasing awareness and concern, Mike and I wanted to do our trip with minimal environmental impact. How close to a zero-carbon footprint could we come?

I wondered if it would be possible to tow boards and gear behind bikes. We began to plan out all of the details of our trip, preparing to do the ride from Fort Bragg, CA to Santa Barbara, CA over a nine day period. All seemed perfectly simple as we began to put together the pieces for a successful trip. Then, at 4:00 a.m. on a February morning I woke up and thought, “I wonder if we can get sponsors?” We began a letter writing campaign to environmentally friendly gear manufacturers letting them know what we were doing, why we were doing it, and asked if they would like to donate sustainable gear to help us on our journey. While having new gear is great, it was our intent and promise to use the donated gear to educate others about our environmental impacts as consumers and sports enthusiasts, and to demonstrate the alternatives that are available. To our surprise, we received sponsorships from 22 organizations! Going back to systems theory, each of our sponsor’s actions impacted Mike and me. We can never fully realize the full scope of our actions. We can only hope that our actions do more positive than negative. What we were seeing taking place was a real-world example of systems theory.

Systems theory is easily summed up with a simple definition: “The whole is greater than the sum of its parts.” Put another way, anything we do as individuals impacts others around us, as well as the environment in which we exist. Discussions about global warming are, in reality, debates about a global version of systems theory. We are becoming increasingly aware that none of us truly exist as individuals without impacting others. Many cultures have long-recognized the importance of thinking from a collectivist perspective, looking out for the good of the whole rather than pursuing the good of the individual. For those of us born and raised in cultures that value the experience of the individual, we are beginning to learn the larger consequences of trying to exist outside the scope of systems theory. We can never fully realize the full scope of our actions. We can only hope that our actions do more positive than negative.

When applied to communication, the Systems Theory Paradigm seeks to understand the interconnectedness of human communication rather than looking at just one part. The basic idea behind Systems Theory is, “The whole is greater than the sum of its parts.” An easy example of this is baking a cake. If you were to lay out all of the ingredients of a cake, you would not have a cake. Instead, you would have the ingredients of cake. But, combine those ingredients in a particular way, you produce a cake. Not only that, you produce an experience surrounding the cake (think birthday, anniversary, wedding, etc.). What is produced by making a cake equals so much more than the simple combination of ingredients.

Another example is an automobile engine. If you have all the pieces of an automobile engine on a garage floor, you do not have an engine. You have parts of an engine. But, if you put the engine parts together in the right way, you get something much greater than the parts; you get transportation. These examples demonstrate the idea that, what makes a cake or automobile engine is the actual interaction or combination of their parts, not the simple sum of the parts themselves.

One area of communication study that utilizes systems theory extensively is the study of Organizational Communication. Scholars in this specialization are interested in the interaction of people to see how they create what we know as organizations (Bavelas & Segal; Katz & Kahn). For example, what makes Wal-mart different than Target? It’s not simply their products or prices. Instead, these two mega-retail stores have a certain “personality” and way of functioning that is different from the other. Those who look at communication from a systems perspective believe that it is the interaction of the participants that makes organizations what they are.

One characteristic of the Systems Theory Paradigm is that systems are teleological (Infante, Rancer & Womack), meaning that they seek to achieve a particular goal or outcome. The goal of combining the ingredients of a cake is to produce a cake and facilitate an occasion. The goal of a working automobile engine is transportation. The goal of having a family is love and support. The goal of a business is to produce products and profit. Communication researchers examine the interactions of those that make up systems to understand the systems’ goals, as well as how they attempt to achieve goals.

Another characteristic of systems is they are always trying to achieve homeostasis — the state of equilibrium or balance. Using the idea of a family, most families attempt to fit in with their neighbors, co-workers, friends, city, country, culture, etc. Systems are always in a process of trying to achieve a level of homeostasis with their environment. When changes occur in either the environment or a system, system participants will adapt in order to maintain balance. For example, if you moved away from your immediate family to attend college your move had an impact on the homeostasis of your family. As a result, everyone in your family had to adjust in some way to the change brought about by your move in order to create a new sense of homeostasis. Even though you are still part of the family system, the system changed as a result of your move, and must respond in order to adapt to the change.

The power of looking at communication from a systems perspective is that every communicative act impacts the system as a whole. When there is a change in one part of a system, it changes the entire system to some degree. Let’s revisit our example of an automobile engine. Let’s say a truck engine started making a terrible noise. The sound was so bad that one would think it might cost hundreds of dollars to fix the problem. However, a mechanic quickly finds that a small bolt had fallen out. Fifty-three cents later (tax included), and five minutes of time, the engine no longer made the terrible noise. Homeostasis was reached once again through the change of one very small part of the engine.

Like a car engine, we form systems with whom we interact. One of the reasons each of your college classes is unique is that each person (component) is unique, and thus, the interaction among the components is unique and cannot be duplicated. When we apply this approach to our communication exchanges we can learn many things about the impacts that our interactions have in the systems in which we interact. Think about systems you belong to like family, work, church, friends, etc. How do your communicative acts, whether big or small, impact the dynamics of these systems? What ways do you communicate in these systems? Do you use things like Skype, Facetime, text messaging, or the traditional phone call to communicate with the members in your systems? Technology continues to open new doors of communication that allows us to participate in a system without having to be physically apart of it.

Systems Theory Paradigm seeks to understand a more complete picture by examining multiple layers of communication as interconnected rather than looking at isolated people or communication acts. This key strength of the paradigm does not try to predict human behavior, but rather explain it in ways that highlight the interconnectedness of people and their communicative acts. Much of the way we communicate is culturally and contextually specific. This approach does not seek to make universal generalizations about human communication, but rather, explain the totality of our interactions.

One of the primary criticisms of the Systems Theory Paradigm is that it can be too broad in its focus. If everything is interconnected, how do we know what to study? What do we focus on when trying to understand communication interactions? This can prove challenging considering the dynamic and changing nature of systems, particularly human systems built on changing relationships. It can be difficult to answer why things happen when we use this approach, making it problematic for generating further theories of human communication. Finally, because it is a relatively new approach for understanding communication, this paradigm has yet to produce a definitive body of research. Studies from this perspective tend to take significant time and money to accomplish.