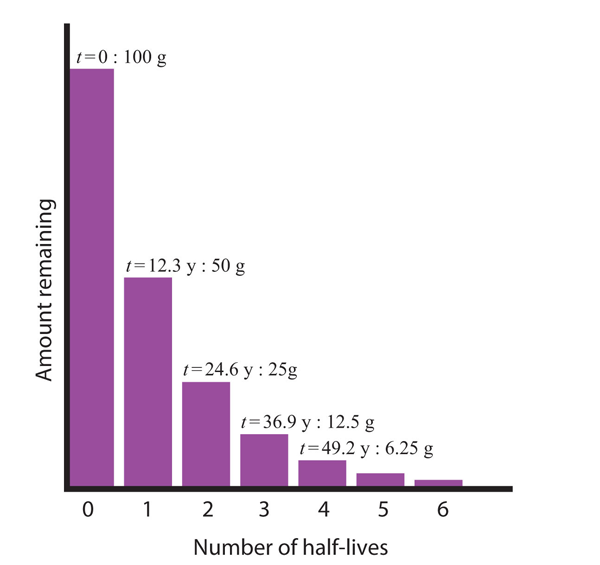 During each successive half-life, half of the initial amount will radioactively decay.

We can determine the amount of a radioactive isotope remaining after a given number half-lives by using the following expression:

If we compare the time that has passed to the isotope’s half-life, we note that 44.0 s is exactly 4 half-lives, so using the previous expression, n = 4. Substituting and solving results in the following:

Less than one-third of a gram of fluorine-20 remains.

Half-lives of isotopes range from fractions of a microsecond to billions of years. Table 15.2 “Half-Lives of Various Isotopes” lists the half-lives of some isotopes.

Chemistry Is Everywhere: Radioactive Elements in the Body

You may not think of yourself as radioactive, but you are. A small portion of certain elements in the human body are radioactive and constantly undergo decay. The following table summarizes radioactivity in the normal human body.

Most of the radioactivity in the human body comes from potassium-40 and carbon-14. Potassium and carbon are two elements that we absolutely cannot live without, so unless we can remove all the radioactive isotopes of these elements, there is no way to escape at least some radioactivity. There is debate about which radioactive element is more problematic. There is more potassium-40 in the body than carbon-14, and it has a much longer half-life. Potassium-40 also decays with about 10 times more energy than carbon-14, making each decay potentially more problematic. However, carbon is the element that makes up the backbone of most living molecules, making carbon-14 more likely to be present around important molecules, such as proteins and DNA molecules. Most experts agree that while it is foolhardy to expect absolutely no exposure to radioactivity, we can and should minimize exposure to excess radioactivity.

What if the elapsed time is not an exact number of half-lives? We can still calculate the amount of material we have left, but the equation is more complicated. The equation is

where e is the base of natural logarithms (2.71828182…), t is the elapsed time, and t1/2 is the half-life of the radioactive isotope. The variables t and t1/2 should have the same units of time, and you may need to make sure you know how to evaluate natural-logarithm powers on your calculator (for many calculators, there is an “inverse logarithm” function that you can use; consult your instructor if you are not sure how to use your calculator). Although this is a more complicated formula, the length of time t need not be an exact multiple of half-lives.

Evaluating the exponent (and noting that the s units cancel), we get

Solving, the amount remaining is 0.114 g. (You may want to verify this answer to confirm that you are using your calculator properly.)

Only radioactive isotopes have a half-life.

Radioactive decay is an exponential process, not a linear process.