Interestingly, although binary formations of sexuality and gender are widely characterized as Western, European, Euro-American, and/or American, there are multiple instances of third gender or non-binary gender formations across European cultures. For example, in Italy’s traditional Neapolitan culture there is the femminiello, an assigned-male-at-birth population of homosexuals with gender variant expression that hold a traditional position in Neapolitan cultural festivities and are generally understood as boons to the community with particular lineages (youngest male child, etc.) These individuals have specific roles in religious parades, are often asked to hold newborn infants, and participate in games such as bingo and raffles (the tombola). Moreover, recent studies suggest that contemporary Neapolitan culture is more accepting of femminielli than mainstream LGBTQ+ notions of sexuality and gender (della Ragione, 2009).  This assignation is associated with the longstanding references to gender ambiguity (androgyny) and intersex individuals in Italian custom, going back to ancient myths about Hermaphroditus (the intersex “son” of Aphrodite and Hermes) and Tiresias. The cult of Hermaphroditus can be traced back to ancient Cypriot rites in which men and women exchanged clothing before the statue of a bearded Aphrodite. 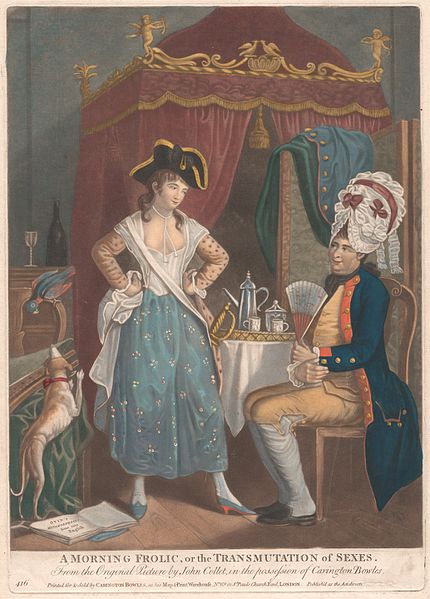 A man and a woman in deshabille swapping clothes.

Additionally, Rictor Norton’s historical work on 18th and 19th century England’s molly-houses, a term for meeting places for gay men, then pejoratively called “mollies”—although it is unclear whether this was also a self-designator.  Rictor describes how socializing and same-sex sexual and romantic bonds could take place there, as well as crossdressing activities such as faux-wedding rituals between men and mock births.  This complicates Foucault’s suggestion that the public categorizing and punishment of the homosexual and homosexuality did not begin until later. These venues were illegal at the time, and homosexuality of any kind was a capital offense in England until the late 19th century.  Thus, as Norton argues, regular raids were performed by police on molly-houses and the homosexuals who participated in them were recognizable social types

View more clips from the BBC series exploring LGBT histories in the UK.