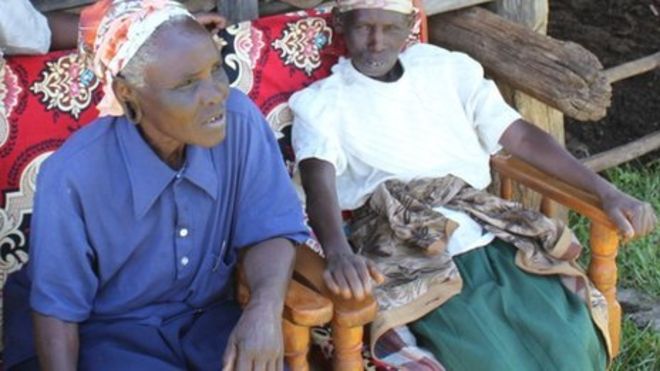 Juliana and Esther Soi, Kenya, married in the early 1990s

Research on various African formations of sexuality and gender describe culturally defined sexuality norms across specific indigenous groups, as well as within urban/rural and religious contexts. Rudolf Gaudio’s work on ‘yan daudu (or “effeminate men” in Hausa language) in the northern Nigerian city of Kano furthers the concept of differences between sexual identity and sexual practices.  ‘Yan daudu are understood as effeminate male sex workers who are not necessarily considered homosexuals, either by themselves or by the public at large, even though they regularly have sex with men. They also occupy a socially ambiguous space with regard to their Islamic faith (Gaudio, 2009). Similarly, Oboler’s work on female husbands among the Nandi of Kenya illustrates a cultural position occupied by older, childless (or more specifically, without a son) women who marry other women. They take on wives, receiving bridewealth, and performing male duties, while not necessarily incorporating this position as a component of their sexualities or gender embodiments. Oboler (1980) argues that maleness and the woman/woman marriage bond is understood as a matter of necessity and function in Nandi patrilineal societies, although that perspective has been critiqued by some authors who argue that Oboler simply did not sufficiently explore the possibilities of a sexual relationship between the women (Wieringa 2005, Research on the Lived Experiences of Lesbian, Bisexual and Queer Women in Kenya 2016). Amadiume similarly explores female husbandry in Igbo culture (1987), and also has been criticized for imposing a heteronormative perspective. Among the Tanala, a Malagasy ethnic group in Madagascar, third gender embodied individuals are referred to as sarombavy; these individuals have been described as occupying a cultural position similar to that of Native American Two-Spirits. There are also third and/or alternative gender identities positions amongst the Swahili on the East African coast.

There is also a growing literature on post-colonial LGBTIQ rights and gender non-conformity and sexual minorities in Africa, reflecting a pan-African political movement.  Following decades of struggle against apartheid in South Africa, the new South African constitution in 1996 enshrined protections against discrimination on the basis of sexual orientation.  Scholars have additionally focused on various postcolonial instances of gender or sexuality-based oppression, violence, and encounters with modernity in African cities, such as issues of sexual violence against lesbians in South Africa and seniority and economic status relational gender/sexuality social positions amongst lesbians in postcolonial Accra, Ghana. (Muholi, 2004; Dankwa, 2013).  In the late 20th century the leaders of new African states typically derided homosexuality as “un-African”, and supported the persecution of lesbians and gay men. However, the 21st century has witnessed a resurgence of activism by gender and sexual minorities across Africa, engaging both indigenous terms and histories of sexuality and gender, and international LGBTQ culture and activism in the creation of new identities that resist and critique colonial and neocolonial heteronormativity.

To celebrate LGBT History Month, the UCL Petrie Museum created an LGBT History Trail of objects that tell of homosexuality in ancient Egypt.