Youth are socialized from a young age through the lens of heteronormativity and cisnormativity, or the view that everyone is heterosexual and straight, which creates difficult conditions for LGBTQ+ students. From as early as elementary school, youth are taught that anything outside of heterosexuality equates to being bad (Espelage & Swearer, 2008), and that the romantic relationships LGBTQ+ youth have are abnormal. Since society makes the presumption that all youth are cisgender and heterosexual, youth are often burdened with having to disclose their identities to others, historically referred to as “coming out”. Identity disclosure is different for sexual minority (LGBQ), transgender (T), and gender non-conforming (GNC) youth. The evolution of identity and the disclosure of it can be a vastly different experience. Sexual and gender minority development and disclosure are described below.

Youth and adolescents acknowledge their sexual orientations and disclose it to others earlier than ever before (Ryan et al, 2009, 2010). Adolescents initially recognize they are attracted to another person of the same gender at about age 10 (Ryan, 2009). Estimates show some youth understanding their identities as young as seven, with the average age at around 13.4. With increased visibility of LGB persons in mainstream culture, it is likely these numbers have decreased over the past decade. 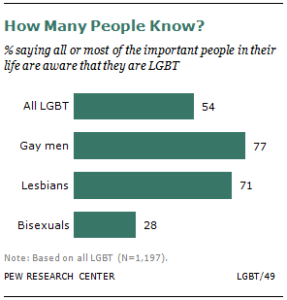 A graph depicting the prevelance of being out to important people in one’s life for LGBT youth. Conducted by the PEW Research Center in 2013.

Approximately 2% of youth identify as gay or lesbian, 6% as bisexual, 3.2% as not sure of their sexual identity, and 2-3% of youth identify as transgender or gender non-conforming (Johns et al., 2019; Eisenberg, Gower, McMorris, Rider, Shea & Coleman, 2017) and these labels stay consistent into early adulthood (Silenzio, Pena, Duberstein, Cerel, & Knox, 2007). Approximately 3.2% of young adults, age 18-26, describe themselves as exclusively or mostly homosexual or bisexual, with more females (3.4%) than males (2.6%) identifying as LGB (Silenzio et al., 2011). Conservative estimates report 3.5% of adults, or approximately nine million people, in the United States identify as lesbian, gay, or bisexual (Gates, 2011).

Two studies have been conducted on the rates of identity disclosure to parents of LGBTQ+ youth (Human Rights Campaign, 2013; Pew Research Center 2013). Both studies reported more than half (56% & 59%) of the LGB youth studied were out to their families. Coming out can be challenging for LGB youth. Many sexual minority youth who have not come out (30%) report the most frequent obstacle to coming out is the fear that their family may not be accepting of LGB individuals or have been openly discriminatory. A small proportion (19%) state that they are not sure how their families would act, while 10% state that they are not ready to come out. Some youth, however, resist identity based labels, and perceive it less important to disclose (Savin-Williams, 2005; Wagaman, 2016).

A recent 2018 report by the Human Rights Campaign found only 21% of transgender and gender expansive youth to be out to their parents, while 33% of youth were considering who to disclose to in their family and how to manage these relationships after disclosure. At this time, early half (41%) of all transgender and gender expansive youth have at least one parent to whom they have come out (Human Rights Campaign, 2018). Research suggests concerns for family responsiveness as a barrier to coming out. While both mothers and fathers were anticipated to act negatively to their child’s disclosure at least half the time, fathers are likely to respond negatively than mothers (63% vs. 54%; Grossman et al., 2005). 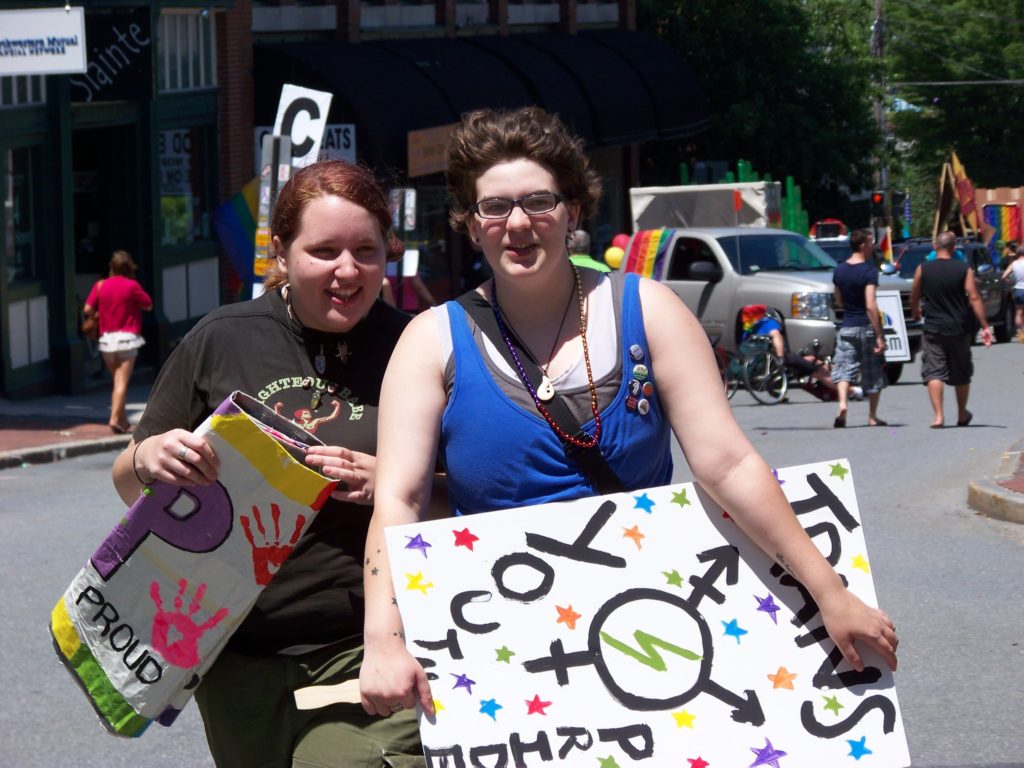 Research has found youth to begin to understand the concept of gender identity as early as ages one and two. In these earlier stages, youth start to internalize the physical (penis, vulva, breasts) differences between genders. At this time, children do not necessarily have a full grasp of their own identity or what it means to identify as a certain gender, but begin to understand what those parts of a body symbolize. By three, children can label their own gender, and by four feel quite certain about their gender identity (Martin & Ruble, 2010). All children during these years until puberty explore their gender presentation and expression, and experiment with toys typical to their gender or of the “opposite” gender. By the time youth reach about five to six years of age, they adopt rules about what it means to be a certain gender, and what will be accepted by others. By age seven, youth feel a sense of gender constancy, and may begin fantasizing about being another gender, or having different physical characteristics to align with their identity (Martin & Ruble, 2010).