This textbook is designed to provide an introduction to and an overview of LGBTQ+ Studies for the introductory level college student and the curious public. It is an Open Educational Resource (OER), which means that it carries an open license, so that the vast majority of its content can be retained, reused, revised, remixed, and redistributed for free, as long as authorship is clearly attributed. It is also available in print at a nominal cost. (See, “What is an Open Textbook?” in the previous section.)

Designing an openly licensed textbook for LGBTQ+ Studies embodies the spirit of the political struggle for the rights of gender and sexual minorities that also animates the field itself. This textbook is designed to be free for everyone to use; it is community-oriented, and a cultural production grounded in the struggle to challenge stereotypes, silences, and untruths that have long been circulated about lesbians, gays, bisexuals, trans* folk, queer and non-binary peoples, our histories, and our cultures. It’s a kind of DIY LGBTQ project for the 21st century. It is also designed to help combat the high cost of a college education in the United States, and around the world, where students all too often simply cannot afford to purchase textbooks for their classes because they cost too much.

Needless to say, this political struggle for the human rights of gender and sexual minorities continues today. Research and writing on LGBTQ issues remains vitally important. While various advances towards equality have been reached in the U.S—there is federal recognition of marriage equality, for example, and enhanced visibility for transgender issues on many college campuses—there are simultaneously widespread areas of backlash and hostility towards LGBTQ+ people. Hate crimes have increased in the past two years, and state legislators continue to try to pass anti-LGBT laws and ordinances. Similarly, there are advances in terms of global LGBTQ rights—India and Jamaica, two former British colonies, have struck down colonial era laws against homosexual activity — even as activists around the world protest violations of LGBTQ human rights. This textbook is designed to speak directly to a broad range of audiences by engaging these critically important social issues.

We believe that this textbook fills a number of needs for both academic readers and the general public. First, it is the only free, openly licensed textbook on LGBTQ+ issues in the world. It offers accessible, academically sound information on a wide range of topics, from LGBTQ+ history, LGBTQ+ relationship, families, parenting, and health, to LGBTQ+ culture. Second, we employ an intersectional analysis throughout the book, highlighting the ways in which sexuality and gender are simultaneously experienced and constructed through other structures of inequality and privilege, such as race and class. This intersectional analysis is grounded in social theory and the social sciences. Third, we have also sought to highlight a more global perspective on LGBTQ+ issues, from the ancient world as well more contemporary ones. Finally, we aim to support multiple learning styles by integrating visual elements and multimedia resources throughout the textbook.

This textbook has evolved over two years of research, writing, and—most importantly—collaboration with a host of colleagues across the U.S. and indeed the world. It was originally born out of Deborah Amory’s experience teaching an Introduction to LGBTQ+ Studies course in the online environment at SUNY Empire State college. SUNY Empire students are typically older (average age 36), working full or part time, engaged in families, caring for parents and/or children. They are struggling to secure a college degree and to learn more about the world they live in. What is most striking about those students, is both their genuine curiosity—whether they were LGBTQ or straight—and their deep desire to learn more so that they could advocate for LGBTQ family members, or serve as allies to friends and colleagues in the workplace. Many work in human services, health care, or in educational settings, and they tell stories about interacting with LGBTQ youth, and wanting to know how to better support them and fight the discrimination they witness. In these classes, the cost of the textbook was $93.00, and Amory found herself buying textbooks for students when they could not afford them. Out of these experiences, then, came this textbook, an answer to the need—for college students, but also for the curious public—to have access to critically important information on LGBTQ+ lives, for free.

And so the textbook was born. In January 2019 we placed a call for participation through the Rebus Community platform, and within 48 hours, dozens of people answered our call. Amory and Sean Massey, who agreed to serve as co-editor, sifted through impressive resume after impressive resume to find the right mix of proposed topics, relevant expertise, and comprehensive coverage. Thanks to a grant from SUNY OER Services, we were able to hold a workshop in Saratoga Springs in spring of 2019, where most of the authors met, shared their work, brainstormed learning outcomes and textbook design, and generally enjoyed each others company. During 2019, each chapter has been peer reviewed at least once, as well as reviewed by the co-editors, and the entire textbook will be peer reviewed as well.

We hope you enjoy the results of our efforts. Beyond this origin story, we also wanted to take some time to define LGBTQ+ Studies, and situate the textbook within the field. Finally, we will provide an overview of the organization of the textbook, so that readers will have a sense of the range of topics and ideas that they will encounter. 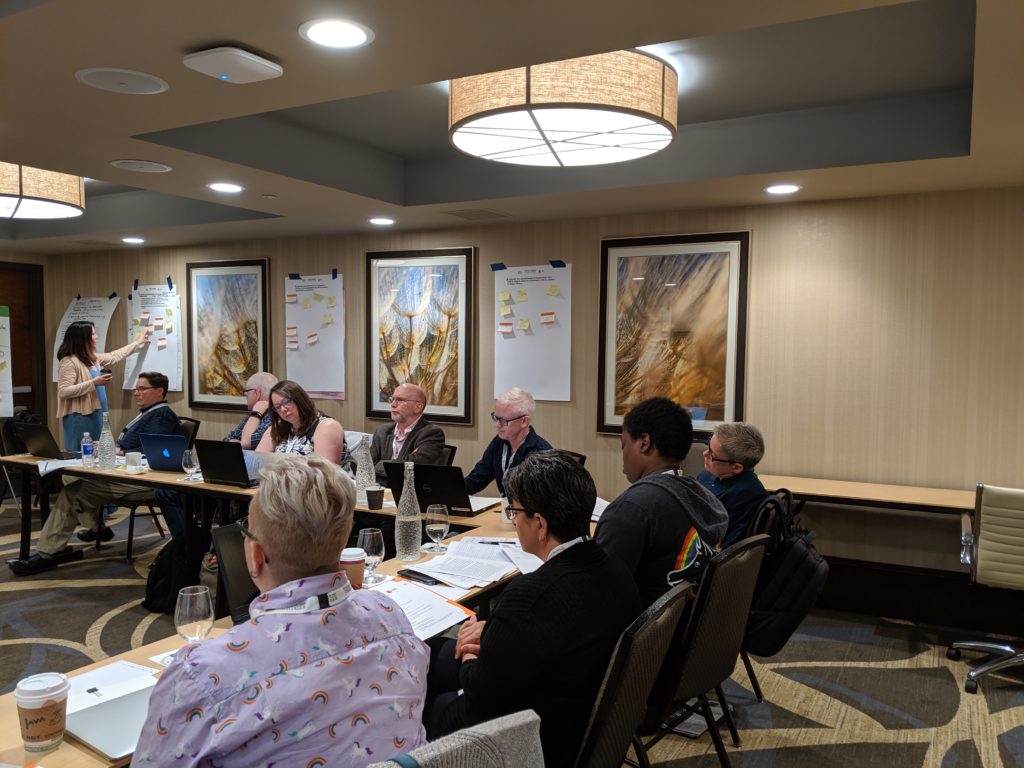 The authors hard at work at our spring event. 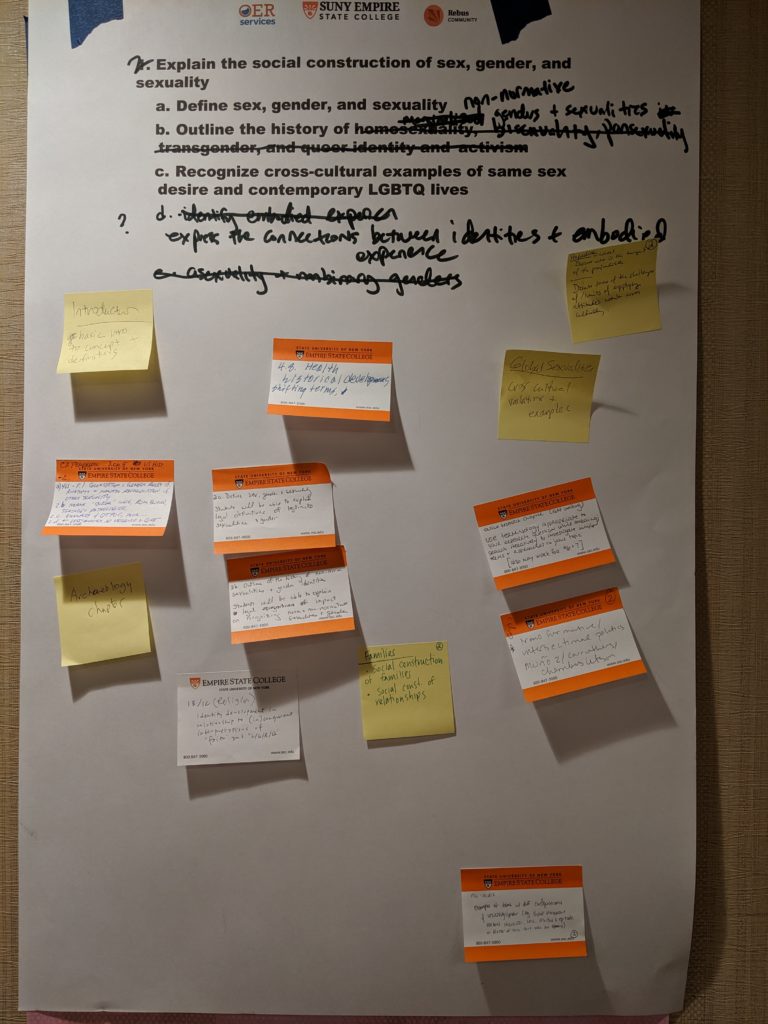