Having achieved the desired outcome of Lawrence the question of the legal status of same-sex marriage loomed large within LGBTQ communities. This was due, in part, to the increase in anti-LGBTQ sentiment that resulted from the notion that the Lawrence decision had gone too far in normalizing homosexuality. Justice Antonin Scalia iterated this concern when he noted that after the Court’s ruling, limiting marriage to heterosexuals was on “pretty shaky grounds” (Lawrence v. Texas, 2003, p. 601). It was also due to a significant number of advocates who witnessed the ways in which LGB couples were denied basic protections during the AIDS epidemic ranging from the limitation of partner input into medical decision-making to the eviction of surviving partners from their apartments (D’Emilio, 2007). As advocates conducted a state by state effort to gain marriage equality, Hawaii became the first state in which its court ruled on the issue in the 1996 case of Baehr v. Miike (originally known as first known as Baehr v. Lewin when it was brought to court in 1993). In that case the Hawaiian Supreme Court ruled that same-sex marriage was legal finding that given the state constitution’s equal rights amendment the state lacked the requisite compelling interest to ban same-sex marriage. However, the impact of this decision was curtailed by the state legislature in 1998 when, after a state-wide referendum, it amended the state constitution to define marriage to be legal only for opposite sex couples. This constitutional change reflected the federal Defense of Marriage Act of 1996 [DOMA] which defined marriage as a, “legal union between one man and one woman as husband and wife, and the word ‘spouse’ refers only to a person of the opposite sex who is a husband or a wife’” (S. 3). During the ensuing period several states took up the question of whether state laws would allow or ban same-sex marriage. In 2004 Massachusetts became the first state to legalize same-sex marriage. By the time the U.S. Supreme Court would address the question of same-sex marriage in U.S. v. Windsor 37 states had legalized same-sex marriage (Eskridge, 2008, p. 495-498).

Same-sex marriage was not wholly embraced within LGBTQ communities. Some, like the LGBTQ attorney Paula Ettelbrick (1989), argued that marriage was a patriarchal institution that would not liberate lesbians and gay men but would, “force our assimilation into the mainstream and undermine the goals of gay liberation” (p. 14). Others urged that same-sex marriage was misdirecting the LGBTQ movement’s attention away from more important efforts including the kind of legal reform that would recognize that laws targeting LGBTQ were suspect in their classifications and warranted the kind of heightened scrutiny applied to race-based, and to a lesser extent, gender-based, legislation (Duggan, 2012). Despite these objections the main LGBTQ advocacy groups focused the bulk of their efforts towards achieving marriage equality for same-sex couples.

The widespread disagreement between state laws on the subject of same-sex marriage and the impact of DOMA finally led to the Supreme Court to address the issue in U.S. v. Windsor (2013). That case involved the surviving partner of a same-sex marriage, Edith Windsor, who sought a refund from the Federal Internal Revenue Service for taxes she was forced to pay on the estate of her spouse, Thea Spyer. Normally, spouses were exempt from paying taxes on their partner’s estate but the IRS determined that irrespective of whether Windsor’s marriage was legal under NYS law, DOMA meant that it was not legal under federal law. Writing for the majority, Justice Kennedy concluded that DOMA’s, “principal effect is to identify a subset of state-sanctioned marriages and make them unequal.” He, therefore, declared DOMA as a violation of equal protection (United States v. Windsor, 2013, p. 753-755). 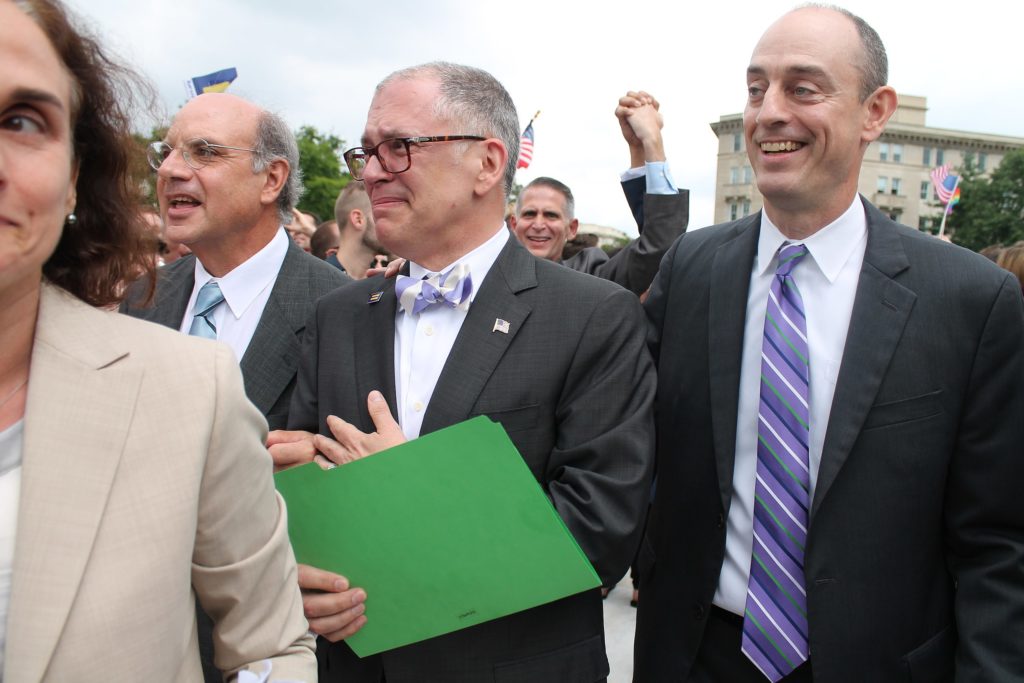 Windsor was a significant victory for same-sex marriage proponents as it declared DOMA unconstitutional. However, the question of whether states were allowed to prohibit same-sex marriages within their jurisdictions would not be resolved until 2015, two years after the Windsor decision in the case of Obergefell v. Hodges (2015). Again writing for the majority, Justice Kennedy found that there was no justification for making a distinction between same-sex and opposite sex marriages, “The limitation of marriage to opposite-sex couples may long have seemed natural and just, but its inconsistency with the central meaning of the fundamental right to marry is now manifest” (Obergefell v. Hodges, 2015, p. 4, quoting Windsor at 15). Kennedy looked at the fundamental nature of marriage itself and determined that there were four guiding principles that warranted Constitutional protection for same sex couples. First he noted that the Court consistently found that the personal decision to marry was inherent to the idea of individual liberty. Second, Kennedy acknowledged that the Court had previously determined marriage to be a union unlike any other that went to the heart of individual liberty. Third, he found that, “By giving recognition and legal structure to their parents’ relationship, marriage allows children, ‘to understand the integrity and closeness of their own family and its concord with other families in their community and in their daily lives’” (Obergefell v. Hodges, 2015, p. 15). Fourth, Kennedy stated that, “this Court’s cases and the Nation’s traditions make clear that marriage is a keystone of our social order” (Obergefell v. Hodges, 2015, p. 16).

Through this analysis Kennedy found that the fundamental right for same sex couples to marry was protected by the Fourteenth Amendment’s Due Process Clause. He went further to note that there was a synergy between this clause and the Fourteenth Amendment’s Equal Protection Clause. He wrote,”The Due Process Clause and the Equal Protection Clause are connected in a profound way, though they set forth independent principles.[…]In any particular case one Clause may be thought to capture the essence of the right in a more accurate and comprehensive way, even as the two Clauses may converge in the identification and definition of the right” (Obergefell v. Hodges, 2015, p. 19). Legal scholar Lawrence Tribe has argued that by linking Equal Protection to Due Process Kennedy gives centrality and meaning to the legal doctrine of “equal dignity.” Tribe (2015) suggested that equal dignity means all individuals deserve personal autonomy and freedom to define their own identity or existence. However, Kennedy’s focus on the tradition and sanctity of marriage in our social order enveloped the issue of LGBTQ rights under the cover of conservative notions of family values (Baia, 2018). Certainly intimacy plays a significant role in the way many LGBTQ people live their lives but, as others have suggested, this alone is not the sole basis for what it means to be queer.