Well written opinion from practitioners on gynecologic issues for women who have sex with women. Covers recommendations for the standards of care for women seeking care in physician’s offices, from mental health considerations to social concerns. The standard all OBGYN physicians need to adhere to for service to sexual and gender minority patients.

Brief sixteen-page report covering the disparities in health services and outcomes seen in the LGBT community, as well as specific areas of concern in the population. Provides basic education into LGBT communities and specific concerns within LGBT populations. Discusses differences in healthcare among LGBT people of color. Provides steps for clinicians and health care providers to provide culturally competent care. Cited by numerous other authors and used as a reference link from many governmental websites about LGBT healthcare.

Documentary film about LGBT older people who are going back into the closet as they age in order to survive societal discrimination. Discusses the aging process, depression and loneliness, and problems with assisted living facing LGBT older people. Notable for including the stories of a transgender senior, as well as an interracial couple. Won jury and audience awards for best documentary at the Sacramento Film and Music Festival in 2010 and the audience award for best documentary at the Frameline Film Festival in 2011.

United States government website highlighting various health issues among the LGBT populations. Links to publications, statistics, data sets, and news from a wide variety of journals, government agencies, and other sources. The CDC is the preeminent U.S. government agency on illness and health.

Trans bodies, trans selves: A resource for the transgender community by Laura Erickson-Schroth 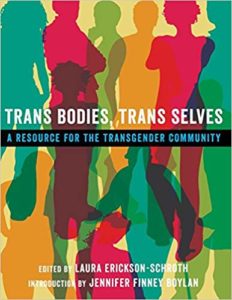 Written in the style and tone of Our Bodies, Our Selves, this book is a resource for both consumers and professionals covering a broad array of topics. Mental, emotional, and physical health are covered widely. Other topics are part of the text, though overall health is a large part of the focus. Places the trans* individual in charge of their life and health. The book received the 2015 Achievement Award from the GLMA: Health Professionals for LGBT Equality. Was listed as one of the top 10 transgender nonfiction books of 2014 by Advocate magazine.

Black LGBT health in the United States: The intersection of race, gender, and sexual orientation by Lourdes Dolores Follins and Jonathan Mathias Lassiter 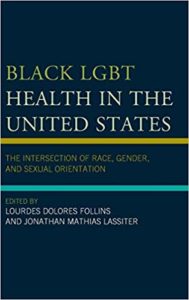 A book for both health consumers and health workers which looks at the intersections of being black and same gender loving. Chapters cover sexual identity, women, incarceration, HIV, and much more. Editors use the cultural signifying term same-gender-loving, rather than the standard Eurocentric term, LGB. Helpful for anyone interested in intersections of sexual and gender identity with race in the United States. Focuses on positive steps for individuals and communities, not on statistics and pathologies. The book received the 2017 Achievement Award from the GLMA: Health Professionals for LGBT Equality.

Report on Agenda 2030, the United Nations global effort on sustainability, including health and preventative education across the globe. These two organizations have written an excellent report of how countries and governments can meet these 2030 goals through specific attention to LGBTI peoples and their needs while addressing the marginalization they face based on sexual orientation, gender identity and expression, and sex characteristics (SOGIESC). Addresses well the many issues facing LGBTI people in their search for equal and sustainable health care across the world.

A website that serves as an educational site for people training in the fields of psychology and psychiatry, as well as a source of information for consumers on the issues surrounding service to LGBT individuals. Includes a history of the field in the treatment of LGBT people as well as primers on transgender and intersex patients. A foundational website created by LGBT psychiatrists that addresses cultural competencies in mental health care and intersections among multiple identities.

An important chapter in a larger online encyclopedia of women’s health issues containing over 400 chapters written by medical specialists in their respective fields. Rated as highly recommended by Choice Reviews. Chapter covers issues of special interest to all women who have sex with women. Topics include more than simply gynecological issues and from a variety of life experiences, not simply Eurocentric studies.

Written by public health professionals, researchers, and clinicians this book provides information on health concerns specific to LGBT populations such as; health care across the life continuum, disease prevention, understanding LGBT health care needs, health promotion, and gender identity. The Fenway Institute is a community-based research, education, and care center located in Boston working with LGBT and HIV affected populations that is well-respected in the field.

“To treat me, you have to know who I am: Welcoming lesbian, gay, bisexual, and transgender (LGBT) patients into healthcare” by New York City Health and Hospitals

Short online video that provides a basic introduction for clinicians and health care providers on how to work with LGBT health consumers for a culturally competent approach to their health. Stresses importance of correct demographic information collection in the medical relationship. Part of a mandatory training for employees of the New York City Health and Hospitals Corporation, the largest municipal healthcare system in the United States.

A journal article covering the history of community-based health services within the LGBT community. A source for information on the reasons for community-based health and the future success or failure of such clinics which played a huge role in the field of LGBT health. The article was funded as part of a long term study from the National Institutes of Health, the U.S. government’s primary biomedical and public health agency. 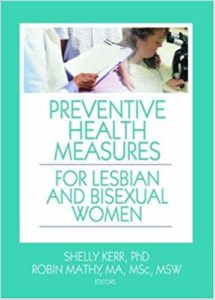 A solid discussion of the similarities and differences of preventive health care in women who have sex with women and minorities within that community. Good discussion of outcomes from physicians based of discrimination and stigmatization.

“Sexual and gender minority health: What we know and what needs to be done” by Kenneth H. Mayer, Judith B. Bradford, Harvey J. Makadon, Ron Stall, Hilary Goldhammer, and Stewart Landers

A journal article which serves as a standard reference for summary of research in the LGBT health field. Strong summary of known disparities in health outcomes, research into specific health topics, and a discussion of what directions LGBT health care needs to move in to meet the needs of clients. The authors are well-known experts in the area of LGBT healthcare and the authors of the Fenway Guide to LGBT Health.

An annual report on the condition of LGBTI peoples around the world, the laws criminalizing gender and sexuality, and articles focusing on particular countries and regions. Datasets from which the report is generated can also be accessed at this website. ILGA (the International Lesbian, Gay, Bisexual, Trans and Intersex Association) is the world’s foremost LGBTI meta-organization and holds special consultative status with the United Nations Economic and Social Council.

Website of an LGBT-focused research and educational organization. This site provides free access to numerous publications highlighting health care concerns and issues of the LGBT population for health care organizations and service providers. Translations of their publications in Spanish and other languages is also available. Another project of the Fenway Institute, the world’s largest LGBT healthcare, research, and education organization.

And the band played on: Politics, people, and the AIDS epidemic by Randy Shilts 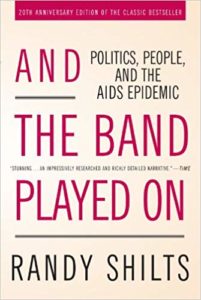 American Library Association Stonewall Award-winning book on the AIDS epidemic by Shilts, a journalist from San Francisco. Told from a variety of viewpoints, the book is an exposé of the failures of the medical establishment, public health, federal government, and research scientists which led to the crisis of AIDS in the 1980s. It serves as a foundation text for the examination of how politics plays a role in disease outbreaks. Exposes both society and government as partners in allowing the deaths of hundreds of thousands of lgbt people. 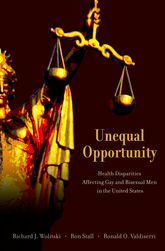 Covering the numerous disparities in health of men who have sex with men (MSM), the editors have chosen to research and analyze the research that demonstrates not only general disparities, but those that effect older men, people of color, low-income MSM and other important areas of study. A highly recommended book by Choice Reviews that can serve both researchers and general readers. Contains numerous ideas for health promotion and public health intervention.

The World Health Organization (WHO) is the United Nations organization concerned with public health issues worldwide. They serve as both a health monitoring and data collection agency in regard to worldwide HIV and AIDS information. Datasets, maps, reports, and charts available on this HIV website highlight the work individual countries are doing to increase access to HIV medications and their prevention efforts.