In response to AIDS, LGBTQ Americans organized new institutions and created new methods to get needed resources, which furthered lively debates over tactics. Because the healthcare system failed to address the epidemic’s causes and consequences, New York City gay men founded Gay Men’s Health Crisis in 1982. It became a model for AIDS service organizations (ASO) that offered information and support to prevent or treat the disease (Eaklor, 2008, p. 177; Stein, 2012, p. 155). Lesbians contributed experience from the women’s health movement where they had countered male-dominated medicine with their own research and support networks. Black Panther free breakfasts and community health clinics became a model for ASOs (Bronski, 2011, p. 229; Eaklor, 2008, p. 180). By 1983 people with AIDS had mobilized nationally to demand control over decisions about their care and to draw attention to scapegoating that fired them from jobs and refused them hospital treatment. Their “Denver Principles” asserted their responsibility to use “low-risk sexual behaviors” without denying their right to “satisfying sexual and emotional lives” (“Statement,” 1983). The gay community split on whether to blame casual sex with multiple partners for the crisis and how to contain the spread of disease. As city public health officials sought to shut down bathhouses and bars that had space for sex, some gay activists agreed while others saw the campaign as more antigay harassment. Instead of driving gay sex further underground, public sites like bathhouses should become education centers for safer sex practices. Meeting spaces were places where the community organized efficiently to respond to AIDS (Bronski, 2011, p. 228).

A major contributor to the AIDS epidemic was willful neglect from the federal government. For the first five years of the epidemic, President Reagan remained silent about it. In 1986 he and governors from both parties proposed cutting government spending on AIDS. That year the Supreme Court ruled in Bowers v. Hardwick that gay adults did not have constitutional privacy rights that would protect them from prosecution for private, consensual sex. The Justice Department announced that federal law allowed employment discrimination based on HIV/AIDS. When Reagan spoke briefly at the Third International Conference on AIDS in 1987 in favor of testing, over 20,000 of the 36,000 Americans diagnosed with AIDS had died. Congress prohibited using federal funds for AIDS education that condoned same-sex behavior but mandated testing of federal prisoners and immigrants to bar entry to those with HIV (Bronski, 2011, p. 231; Stein, 2012, p. 157). 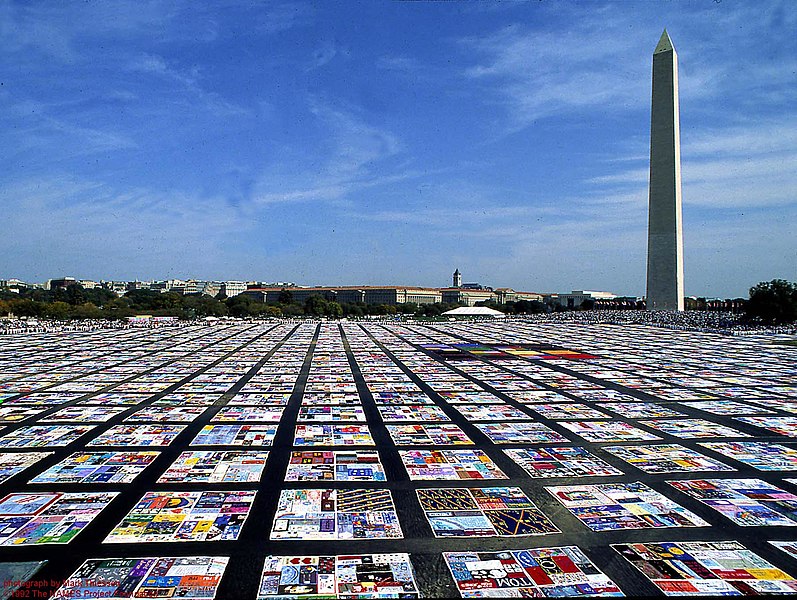 This spurred high-impact radical organizing. Larry Kramer and cofounders formed AIDS Coalition to Unleash Power or ACT UP in 1987. It further publicized the NYC slogan “Silence = Death” in demonstrations. ACT UP dramatically disrupted Wall Street, the Food and Drug Administration, the Center for Disease Control, and St. Patrick’s Cathedral to protest the high cost of AZT (the first drug treatment) and the appointment of a loudly homophobic Catholic Cardinal to the Presidential HIV Commission. ACT UP chapters spread to other cities, known for their insistence on action and their reclaiming of the term “queer.” (Eaklor, 2008, p. 177; Stein, 2012, pp. 158-163). Keith Haring’s graffiti art spread the message. Cleve Jones created a memorial for people lost to AIDS, inviting loved ones to create three-foot by six-foot panels for the NAMES Project AIDS Memorial Quilt. During the second March on Washington in October 1987, volunteers laid out 1,920 panels on the National Mall (Eaklor, pp.177-178).

In tandem with responses to AIDS, often overlooked portions of LGBT Americans organized. Bisexuals started forming social groups and then National Bisexual Liberation Group in 1972 based on N.Y., S.F.’s Bisexual Center in 1976, and the national BiPOL in San Francisco in 1983. Although the 1987 March on Washington organizers would not include bi or trans in the march title of demands, both constituents argued “gay and lesbian” was not inclusive (Garber, 1991; Garber, 1995; Queen, 1995; Queen, 1997; Queen and Schimel, 1997). New trans groups arose with transnational scope, including FTM International and International Foundation for Gender Education, along with periodicals like Metamorphosis and Tapestry (Eaklor, 2008, pp. 152, 181). Trans people were disproportionately poor due to job discrimination. Budget cuts to AIDS programs, welfare, and health programs were devastating while for-profit centers sold medical procedures for gender transition at high costs.

Gay, lesbian, and bi Americans who shared other minority statuses had started gathering in the 1970s and continued throughout the 1980s. The National Rainbow Society of the Deaf (1977) grew from its Florida origins to hold annual conventions around the country as Rainbow Alliance of the Deaf (1982) and became a force for advocacy. American Indian Gays and Lesbians joined Gay American Indians (1975 SF) in 1987; AIGL conferences produced the consensus that “two-spirit” was the preferred term for gender-expansive natives (Stein, 2012, p. 152). The national Asian Pacific Lesbian Network also started the year of organizing for the 1987 march. African Americans gays and lesbians created religious community with Unity Fellowship Church (1985) and secular groups. When gay men formed the National Association of Black and White Men Together (1981) with local affiliates they ushered in one form of interracial organizing. Some queer people of color (QPOC) joined with white gays and lesbians for antidiscrimination and AIDS work while criticizing racism in white dominated queer communities. QPOC worked with other people of color for civil rights, poverty issues, and anti-imperialism while objecting to those communities’ homophobia, sexism, and transphobia. QPOC needed their own queer groups by race as respites from coalition work (Stein, 2012, pp. 153-4).