Work plays a significant role in the lives of people, and emerging and early adulthood is the time when most of us make choices that will establish our careers. Career development has a number of stages:

How have things changed for Millennials compared with previous generations of early adults? In recent years, young adults are more likely to find themselves job-hopping, and periodically returning to school for further education and retraining than in prior generations. However, researchers find that occupational interests remain fairly stable. Thus, despite the more frequent change in jobs, most people are generally seeking jobs with similar interests rather than entirely new careers (Rottinghaus, Coon, Gaffey & Zytowski, 2007).

Recent research also suggests that Millennials are looking for something different in their place of employment. According to a recent Gallup poll report (2016), Millennials want more than a paycheck, they want a purpose. Unfortunately, only 29% of Millennials surveyed by Gallup reported that they were “engaged” at work. In fact, they report being less engaged than Gen Xers and Baby Boomers; with 55% of Millennials saying they are not engaged at all with their job. This indifference to their workplace may explain the greater tendency to switch jobs. With their current job giving them little reason to stay, they are more likely to take any new opportunity to move on. Only half of Millennials saw themselves working at the same company a year later. Gallup estimates that this employment turnover and lack of engagement costs businesses $30.5 billion a year.

NEETs: Around the world, teens and young adults were some of the hardest hit by the economic downturn in recent years (Desilver, 2016). Consequently, a number of young people have become NEETs, neither employed nor in education or training. While the number of young people who are NEETs has declined, there is concern that “without assistance, economically inactive young people won’t gain critical job skills and will never fully integrate into the wider economy or achieve their full earning potential” (Desilver, 2016, para. 3). In Europe, where the rates of NEETs are persistently high, there is also concern that having such large numbers of young adults with little opportunity may increase the chances of social unrest.

In the United States, in 2015 nearly 17% of 16 to 29 year-olds were neither employed nor in school, according to data Desilver (2016) obtained from the Bureau of Labor Statistics. This is down slightly from 2013, when approximately 18.5% of this age group fit the category. As noted in Table 7.2, more women than men find themselves unemployed and not in school. Additionally, most NEETs have high school or less education, and Asians are less likely to be NEETs than any other ethnic group. 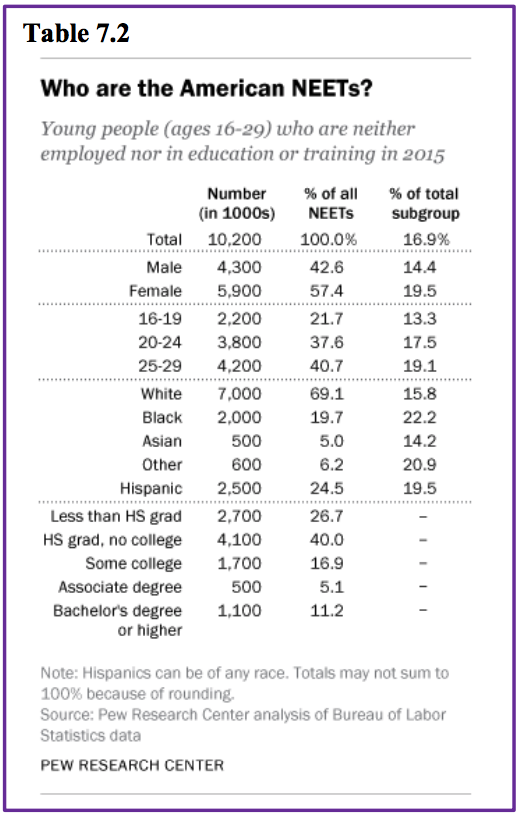 The rate of NEETs varies in European nations, with higher rates found in nations that have been the hardest hit by economic recessions and government austerity measures. For example, more than 25% of those 15-29 (European data use a lower age group: 15 rather than 16) in Greece and Italy are unemployed and not seeking or receiving further education. In contrast, countries less affected by an economic downturn, such as Denmark, had much lower rates (7.3%).

What role does gender play on career and employment? Gender also has an impact on career choices. Despite the rise in the number of women who work outside of the home, there are some career fields that are still pursued more by men than women. Jobs held by women still tend to cluster in the service sector, such as education, nursing, and child-care worker. While in more technical and scientific careers, women are greatly outnumbered by men. Jobs that have been traditionally held by women tend to have lower status, pay, benefits, and job security (Ceci & Williams, 2007).

In recent years, women have made inroads into fields once dominated by males, and today women are almost as likely as men to become medical doctors or lawyers. Despite these changes, women are more likely to have lower-status, and thus less pay than men in these professions. For instance, women are more likely to be a family practice doctor than a surgeon, or are less likely to make partner in a law firm (Ceci & Williams, 2007).