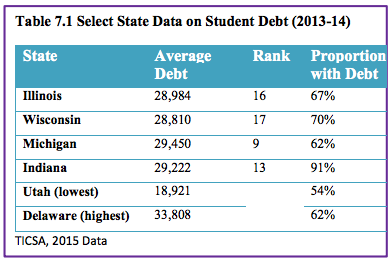 The rate of college attainment has grown more slowly in the United States than in a number of other nations in recent years (OCED, 2014). This may be due to fact that the cost of attaining a degree is higher in the U.S. than in many other nations.

In 2014, 7 out of every 10 graduates in the U.S. owed an average of nearly $29,000, up 2 percent from the previous year (The Institute for College Access and Success [TICAS], 2015).As the level of State funding of higher education declines, students are finding that the cost of college is outpacing the rate of inflation, Pell grant increases, and other student scholarships. One in six students are funding their education through personal loans (TICAS, 2015). See Table 7.1 for a comparison of several U.S. States regarding student debt.

Is college worth the time and investment? College is certainly a substantial investment each year, with the financial burden falling on students and their families in the U.S., and mainly by the government in many other nations. Nonetheless, the benefits both to the individual and the society outweighs the initial costs. As can be seen in Figure 7.18, those in America with the most advanced degrees earn the highest income and have the lowest unemployment. 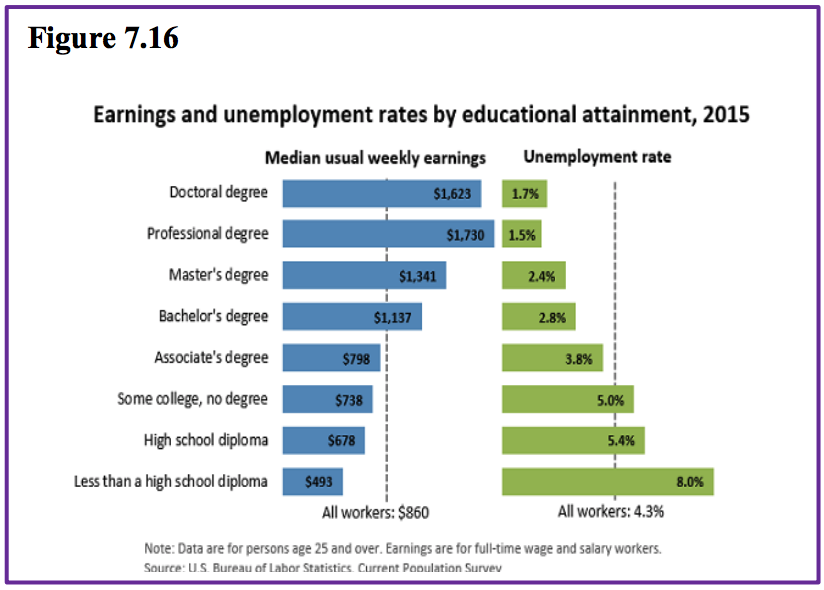 Worldwide, over 80% of college educated adults are employed, compared with just over 70% of those with a high school or equivalent diploma, and only 60% of those with no high school diploma (OECD, 2015). Those with a college degree will earn more over the course of their life time. Moreover, the benefits of college education go beyond employment and finances. The OECD found that around the world, adults with higher educational attainment were more likely to volunteer, felt they had more control over their lives, and thus were more interested in the world around them. Studies of U.S. college students find that they gain a more distinct identity and become more socially competent, less dogmatic and ethnocentric compared to those not in college (Pascarella, 2006).