We will now turn our attention to the physical, cognitive, and socioemotional development during the first two years. Researchers have given this part of the lifespan more attention than any other period, perhaps because changes during this time are so dramatic and so noticeable. We have also assumed that what happens during these years provides a foundation for one’s life to come. However, it has been argued that the significance of development during these years has been overstated (Bruer, 1999).

Overall Physical Growth: The average newborn in the United States weighs about 7.5 pounds (between 5 and 10 pounds) and is about 20 inches in length. For the first few days of life, infants typically lose about 5 percent of their body weight as they eliminate waste and get used to feeding. This often goes unnoticed by most parents, but can be cause for concern for those who have a smaller infant. This weight loss is temporary, however, and is followed by a rapid period of growth. By the time an infant is 4 months old, it usually doubles in weight and by one year has tripled the birth weight. By age 2, the weight has quadrupled, so we can expect that a 2 year-old should weigh between 20 and 40 pounds. The average length at one year is about 29.5 inches and at two years it is around 34.4 inches (Bloem, 2007). 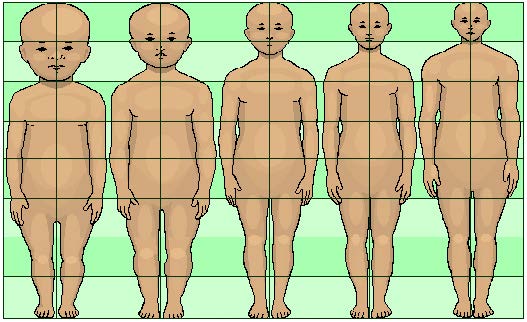