As most developed nations restrict the number of hours an employer can demand that an employee work per week, and require employers to offer paid vacation time, what do middle aged adults do with their time off from work and duties, referred to as leisure? Around the world the most common leisure activity in both early and middle adulthood is watching television (Marketing Charts Staff, 2014). On average, middle aged adults spend 2-3 hours per day watching TV (Gripsrud, 2007) and watching TV accounts for more than half of all the leisure time (see Figure 8.21). 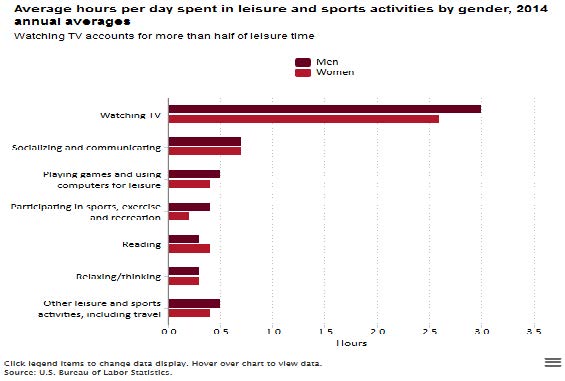 In the United States, men spend about 5 hours more per week in leisure activities, especially on weekends, than do women (Drake, 2013; U.S. Bureau of Labor Statistics, 2016). The leisure gap between mothers and fathers is slightly smaller, about 3 hours a week, than among those without children under age 18 (Drake, 2013). Those age 35-44 spend less time on leisure activities than any other age group, 15 or older (U.S. Bureau of Labor Statistics, 2016). This is not surprising as this age group are more likely to be parents and still working up the ladder of their career, so they may feel they have less time for leisure.

Americans have less leisure time than people in many other developed nations. As you read earlier, there are no laws in many job sectors guaranteeing paid vacation time in the United States (see Figure 8.22). Ray, Sanes and Schmitt (2013) report that several other nations also provide additional time off for young and older workers and for shift workers. In the United States, those in higher paying jobs and jobs covered by a union contract are more likely to have paid vacation time and holidays (Ray & Schmitt, 2007). 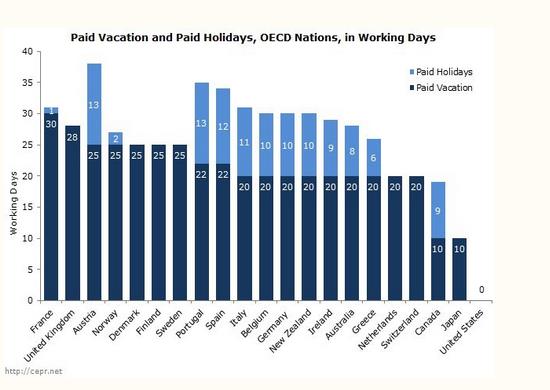 But do U.S. workers take their time off? According to Project Time-Off (2016), 55% of U.S. workers in 2015 did not take all of their paid vacation and holiday leave. A large percentage of this leave is lost. It cannot be rolled-over into the next year or paid out. A total of 658 million vacation days, or an average of 2 vacation days per worker was lost in 2015. The reasons most often given for not taking time off was worry that there would be a mountain of work to return to (40%), concern that no one else could do the job (35%), not being able to afford a vacation (33%), feeling it was harder to take time away when you have or are moving up in the company (33%), and not wanting to seem replaceable (22%). Since 2000, more American workers are willing to work for free rather than take the time that is allowed to them. A lack of support from their boss and even their colleagues to take a vacation is often a driving force in deciding to forgo time off. In fact, 80% of the respondents to the survey above said they would take time away if they felt they had support from their boss. Two-thirds reported that they hear nothing, mixed messages, or discouraging remarks about taking their time off. Almost a third (31%) feel they should contact their workplace, even while on vacation.

There are many socioemotional changes that occur in how middle-aged adults perceive themselves. While people in their early 20s may emphasize how old they are to gain respect or to be viewed as experienced, by the time people reach their 40s they tend to emphasize how young they are. For instance, few 40 year olds cut each other down for being so young stating: “You’re only 43? I’m 48!” A previous focus on the future gives way to an emphasis on the present. Neugarten (1968) notes that in midlife, people no longer think of their lives in terms of how long they have lived. Rather, life is thought of in terms of how many years are left.