Who is the U.S. workforce? The civilian, non-institutionalized workforce; that is the population of those aged 16 and older, who are employed has steadily declined since it reached its peak in the late 1990s, when 67% of the civilian workforce population was employed. In 2012 the rate had dropped to 64% and by 2022 it is projected to decline to 62%. The U.S. population is expected to grow more slowly based on census projections for the next few years. Those new entrants to the labor force, adults age 16 to 24, are the only population of adults that will shrink in size over the next few years by nearly half a percent, while those age 55 and up will grow by 2.3% over current rates, and those age 65 to 74 will grow by nearly 4% (Monthly Labor Review (MLR), 2013). In 1992, 26% of the population was 55+, by 2022 it is projected to be 38%. Table 8.8 shows the rates of employment by age. In 2002, baby boomers were between the ages of 38 to 56, the prime employment group. In 2012, the youngest baby boomers were 48 and the oldest had just retired (age 66). These changes might explain some of the steady decline in work participation as this large population cohort ages out of the workforce.

In 2012, 53% of the workforce was male. For both genders and for most age groups the rate of participation in the labor force has declined from 2002 to 2012, and it is projected to decline further by 2022. The exception is among the older middle-age groups (the baby boomers), and especially for women 55 and older.

Hispanic males have the highest rate of participation in the labor force. In 2012, 76% of Hispanic males, compared with 71% of White, 72% of Asian, and 64% of Black men ages 16 or older were employed. Among women, Black women were more likely to be participating in the workforce (58%) compared with almost 57% of Hispanic and Asian, and 55% of White females. The rates for all racial and ethnic groups are expected to decline by 2022 (MLR, 2013).

Climate in the Workplace for Middle-aged Adults: A number of studies have found that job satisfaction tends to peak in middle adulthood (Besen, Matz-Costa, Brown, Smyer, & Pitt- Catsouphers, 2013; Easterlin, 2006). This satisfaction stems from not only higher wages, but often greater involvement in decisions that affect the workplace as they move from worker to supervisor or manager. Job satisfaction is also influenced by being able to do the job well, and after years of experience at a job many people are more effective and productive. Another reason for this peak in job satisfaction is that at midlife many adults lower their expectations and goals (Tangri, Thomas, & Mednick, 2003). Middle-aged employees may realize they have reached the highest they are likely to in their career. This satisfaction at work translates into lower absenteeism, greater productivity, and less job hopping in comparison to younger adults (Easterlin, 2006).

However, not all middle-aged adults are happy in the work place. Women may find themselves up against the glass ceiling, organizational discrimination in the workplace that limits the career advancement of women. This may explain why females employed at large corporations are twice as likely to quit their jobs as are men (Barreto, Ryan, & Schmitt, 2009). Another problem older workers may encounter is job burnout, becoming disillusioned and frustrated at work. American workers may experience more burnout than do workers in many other developed nations, because most developed nations guarantee by law a set number of paid vacation days (International Labour Organization, ILO, 2011), the United States does not (U.S. Department of Labor, 2016). 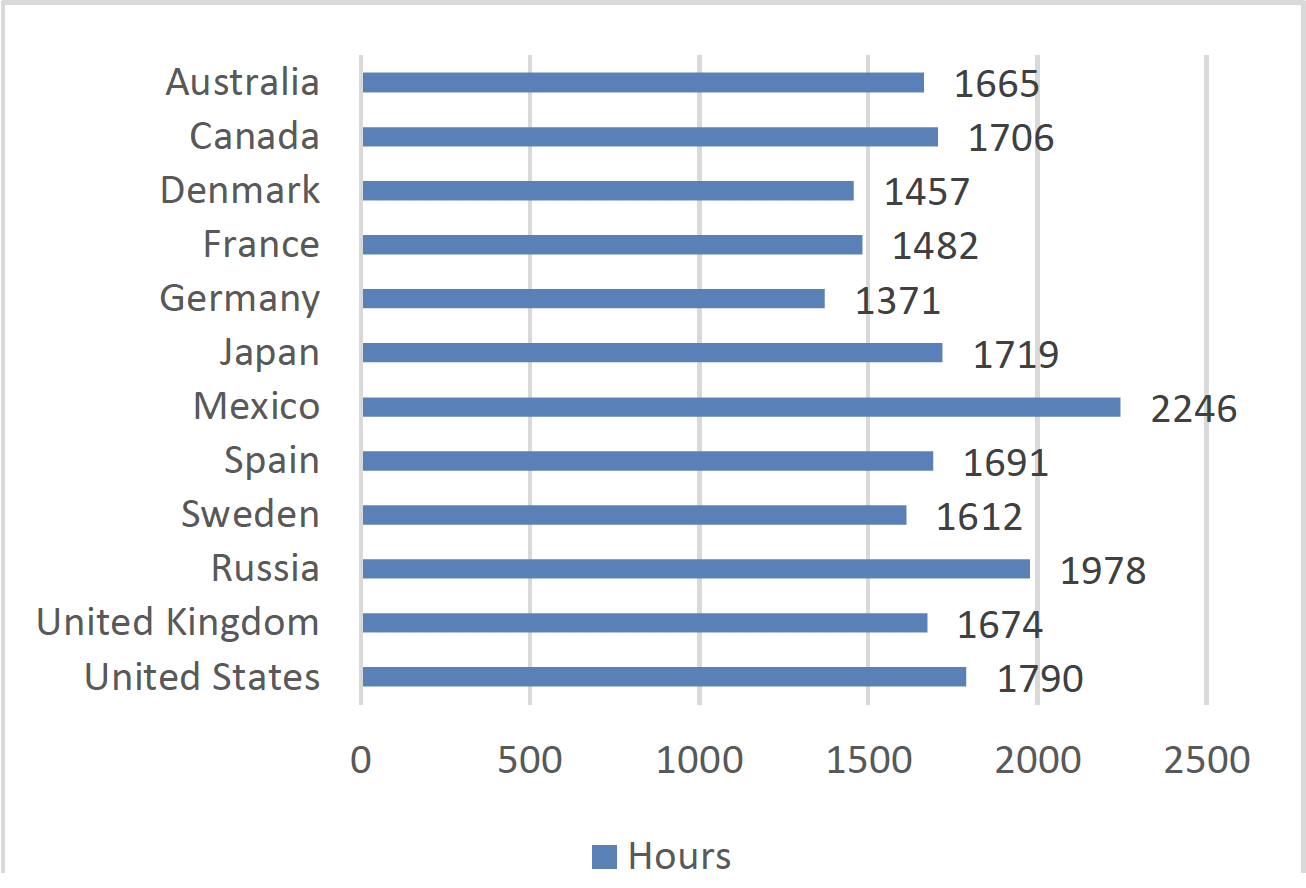 Not all employees are covered under overtime pay laws (U.S. Department of Labor, 2016). This is important when you considered that the 40-hour work week is a myth for most Americans. Only 4 in 10 U.S. workers work the typical 40-hour work week. The average work week for many is almost a full day longer (47 hours), with 39% working 50 or more hours per week (Saad, 2014). In comparision to workers in many other developed nations, American workers work more hours per year (Organisation for Economic Cooperation and Development, OECD, 2016). As can be seen in Figure 8.19, Americans work more hours than most European nations, especially western and northern Europe, although they work less hours than workers in other nations, especially Mexico.

Challenges in the Workplace for Middle- aged Adults: In recent years middle aged adults have been challenged by economic downturns, starting in 2001, and again in 2008. Fifty-five percent of adults reported some problems in the workplace, such as fewer hours, pay-cuts, having to switch to part-time, etc., during the most recent economic recession (see Figure 8.20, Pew Research Center, 2010a). While young adults took the biggest hit in terms of levels of unemployment, middle-aged adults also saw their overall financial resources suffer as their retirement nest eggs disappeared and house values shrank, while foreclosures increased (Pew Research Center, 2010b). 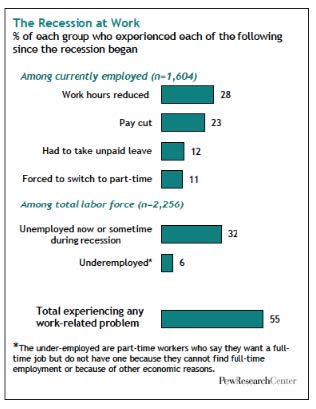 Not surprisingly this age group reported that the recession hit them worse than did other age groups, especially those age 50-64. Middle aged adults who find themselves unemployed are likely to remain unemployed longer than those in early adulthood (U.S. Government Accountability Office, 2012). In the eyes of employers, it may be more cost effective to hire a young adult, despite their limited experience, as they would be starting out at lower levels of the pay scale. In addition, hiring someone who is 25 and has many years of work ahead of them versus someone who is 55 and will likely retire in 10 years may also be part of the decision to hire a younger worker (Lachman, 2004). American workers are also competing with global markets and changes in technology. Those who are able to keep up with all these changes, or are willing to uproot and move around the country or even the world have a better chance of finding work. The decision to move may be easier for people who are younger and have fewer obligations to others.