The Baltimore Longitudinal Study on Aging (BLSA) (NIA, 2011b) began in 1958 and has traced the aging process in 1,400 people from age 20 to 90. Researchers from the BLSA have found that the aging process varies significantly from individual to individual and from one organ system to another. However, some key generalization can be made including heart muscles thickening with age, arteries becoming less flexible, and lung capacity diminishing. Kidneys become less efficient in removing waste from the blood, and the bladder loses its ability to store urine. Brain cells also lose some functioning, but new neurons can also be produced. Many of these changes are determined by genetics, lifestyle, and disease. Other changes in late adulthood include:

Body Changes: Everyone’s body shape changes naturally as they age. According to the National Library of Medicine (2014) after age 30 people tend to lose lean tissue, and some of the cells of the muscles, liver, kidney, and other organs are lost. Tissue loss reduces the amount of water in your body and bones may lose some of their minerals and become less dense (a condition called osteopenia in the early stages and osteoporosis in the later stages). The amount of body fat goes up steadily after age 30, and older individuals may have almost one third more fat compared to when they were younger. Fat tissue builds up toward the center of the body, including around the internal organs.

Skin and Hair: With age skin becomes thinner, less elastic, loses fat, and no longer looks plump and smooth. Veins and bones can be seen more easily and scratches, cuts, and bumps can take longer to heal. Years exposed to the sun may lead to wrinkles, dryness, age spots, and cancer. Older people may bruise more easily, and it can take longer for these bruises to heal. Some medicines or illnesses may also cause bruising. Gravity can cause skin to sag and wrinkle, and smoking can wrinkle the skin. Also, seen in older adults are age spots, previously called “liver spots”. They look like flat, brown spots and are often caused by years in the sun. Skin tags are small, usually flesh-colored growths of skin that have a raised surface. They become common as people age, especially for women, but both age spots and skin tags are harmless (NIA, 2015f).

Nearly everyone has hair loss as they age, and the rate of hair growth slows down as many hair follicles stop producing new hairs. The loss of pigment and subsequent graying begun in middle adulthood continues in late adulthood.

Sarcopenia is the loss of muscle tissue as a natural part of aging. Sarcopenia is most noticeable in men, and physically inactive people can lose as much as 3% to 5% of their muscle mass each decade after age 30, but even when active muscle loss still occurs (Webmd, 2016). Symptoms include a loss of stamina and weakness, which can decrease physical activity and subsequently further shrink muscles. Sarcopenia typically happens faster around age 75, but it may also speed up as early as 65 or as late as 80. Factors involved in sarcopenia include a reduction in nerve cells responsible for sending signals to the muscles from the brain to begin moving, a decrease in the ability to turn protein into energy, and not receiving enough calories or protein to sustain adequate muscle mass. Any loss of muscle is important because it lessens strength and mobility, and sarcopenia is a factor in frailty and the likelihood of falls and fractures in older adults. Maintaining strong leg and heart muscles are important for independence. Weight-lifting, walking, swimming, or engaging in other cardiovascular exercises can help strengthen the muscles and prevent atrophy. 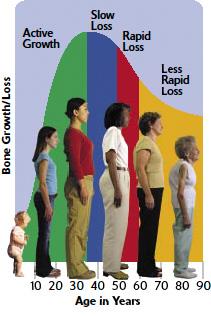 Height and Weight: The tendency to become shorter as one ages occurs among all races and both sexes. Height loss is related to aging changes in the bones, muscles, and joints. People typically lose almost one-half inch every 10 years after age 40, and height loss is even more rapid after age 70. A total of 1 to 3 inches in height is lost with aging. Changes in body weight vary for men and woman. Men often gain weight until about age 55, and then begin to lose weight later in life, possibly related to a drop in the male sex hormone testosterone. Women usually gain weight until age 65, and then begin to lose weight. Weight loss later in life occurs partly because fat replaces lean muscle tissue, and fat weighs less than muscle. Diet and exercise are important factors in weight changes in late adulthood (National Library of Medicine, 2014).