A carbenoid is best considered to be a reagent which, while not actually a carbene, behaves as if it were an intermediate of this type.

Dichlorocarbenes can also form cyclopropane structures and are created in situ from reagents such as chloroform and KOH.

The detailed mechanism of the formation of dichlorocarbene is given below. Note that the deprotonation of chloroform generates the trichloromethanide anion, which spontaneously expels the chloride anion.

The highly strained nature of cyclopropane compounds makes them very reactive and interesting synthetic targets. Additionally cyclopropanes are present in numerous biological compounds. One common method of cyclopropane synthesis is the reaction of carbenes with the double bond in alkenes or cycloalkenes. Methylene, H2C, is simplest carbene, and in general carbenes have the formula R2C. Other species that will also react with alkenes to form cyclopropanes but do not follow the formula of carbenes are referred to as carbenoids.

Carbenes were once only thought of as short lived intermediates. The reactions of this section only deal with these short lived carbenes which are mostly prepared in situ, in conjunction with the main reaction. However, there do exist so called persistent carbenes. These persistent carbenes are stabilized by a variety of methods often including aromatic rings or transition metals. In general a carbene is neutral and has 6 valence electrons, 2 of which are non bonding. These electrons can either occupy the same sp2 hybridized orbital to form a singlet carbene (with paired electrons), or two different sp2 orbitals to from a triplet carbene (with unpaired electrons). The chemistry of triplet and singlet carbenes is quite different but can be oversimplified to the statement: singlet carbenes usually retain stereochemistry while triplet carbenes do not. The carbenes discussed in this section are singlet and thus retain stereochemistry.

The reactivity of a singlet carbene is concerted and similar to that of electrophilic or nucleophilic addition (although, triplet carbenes react like biradicals, explaining why sterochemistry is not retained). The highly reactive nature of carbenes leads to very fast reactions in which the rate determining step is generally carbene formation.

A carbene such as methlyene will react with an alkene which will break the double bond and result with a cyclopropane. The reaction will usually leave stereochemistry of the double bond unchanged. As stated before, carbenes are generally formed along with the main reaction; hence the starting material is diazomethane not methylene.

Additional Types of Carbenes and Carbenoids

In addition to the general carbene with formula R2C there exist a number of other compounds that behave in much the same way as carbenes in the synthesis of cyclopropane. Halogenated carbenes are formed from halomethanes. An example is dicholorcarbene, Cl2C. These halogenated carbenes will form cyclopropanes in the same manner as methylene but with the interesting presence of two halogen atoms in place of the hydrogen atoms.

Carbenoids are substances that form cyclopropanes like carbenes but are not technically carbenes. One common example is the stereospecific Simmon-Smith reaction which utilizes the carbenoid ICH2ZnI. The carbenoid is formed in situ via the mixing of a Zn-Cu couple with CH2I2.Since this reacts thesame as a carbene, the same methods can be applied to determine the product. An example of this is given as problem 5.

2. What would be the result of a Simmons-Smith reaction that used trans-3-pentene as a reagent?

5. Draw the product of this reaction. What type of reaction is this?

Show Answer
The product will be a bicyclic ring, Bicyclo[4.1.0]heptane.

Show Answer
The stereochemistry will be retained making a cyclopropane with trans methyl and ethyl groups. Trans-1-ethyl-2-methylcyclopropane

Show Answer
The cis configuration will be maintained from reagent to product so we would want to start with cis-3-hexene. A Simmons Smith reagent, or methylene could be used as the carbene or carbenoid.

Show Answer
The halogenated carbene will react the same as methylene yielding, cis-1,1-dichloro-2,3dimethylcyclopropane.

Show Answer
This is a Simmons-Smith reaction which uses the carbenoid formed by the CH2I2 and Zu-Cu. The reaction results in the same product as if methylene was used and retains stereospecificity. Iodine metal and the Zn-Cu are not part of the product. The product is trans-1,2-ethyl-methylcyclopropane.

Predict the following products. Will they be the same product? 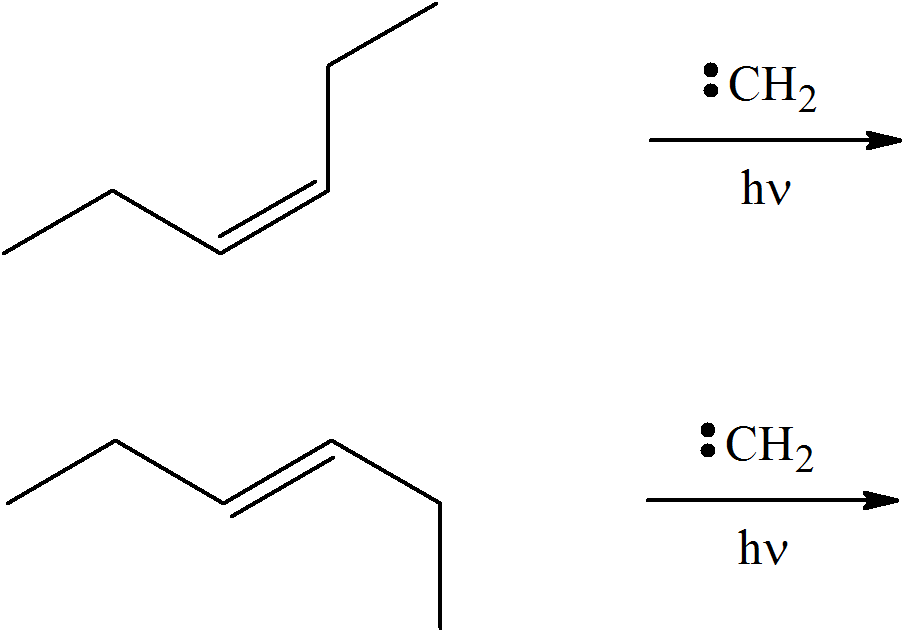 No they will not be the same product, they will be isomers of each other.