An Introduction to Organic Synthesis

After completing this section, you should be able to design a multistep synthesis to prepare a given product from a given starting material, using any of the reactions introduced in the textbook up to this point.

You should have noticed that some of the assigned problems have required that you string together a number of organic reactions to convert one organic compound to another when there is no single reaction to achieve this goal. Such a string of reactions is called an “organic synthesis.” One of the major objectives of this course is to assist you in designing such syntheses. To achieve this objective, you will need to have all of the reactions described in the course available in your memory. You will need to recall some reactions much more frequently than others, and the only way to master this objective is to practise. The examples given in this chapter will be relatively simple, but you will soon see that you can devise some quite sophisticated syntheses using a limited number of basic reactions.

The study of organic chemistry exposes a student to a wide range of interrelated reactions. Alkenes, for example, may be converted to structurally similar alkanes, alcohols, alkyl halides, epoxides, glycols and boranes; cleaved to smaller aldehydes, ketones and carboxylic acids; and enlarged by carbocation and radical additions as well as cycloadditions. All of these products may be transformed subsequently to a host of new compounds incorporating a wide variety of functional groups, and thereby open to even further elaboration. Consequently, the logical conception of a multistep synthesis for the construction of a designated compound from a specified starting material becomes one of the most challenging problems that may be posed.

A one or two step sequence of simple reactions is not that difficult to deduce. If, for example, one is asked to prepare meso-3,4-hexanediol from 3-hexyne, most students realize it will be necessary to reduce the alkyne to cis or trans-3-hexene before undertaking glycol formation. Permanaganate or osmium tetroxide hydroxylation of cis-3-hexene would form the desired meso isomer. From trans-3-hexene it would be necessary to first epoxidize the alkene with a peracid, followed by ring opening with hydroxide ion. This example illustrates a common feature in synthesis: often there is more than one effective procedure that leads to the desired product.

Longer multistep syntheses require careful analysis and thought, since many options need to be considered. Like an expert chess player evaluating the long range pros and cons of potential moves, the chemist must appraise the potential success of various possible reaction paths, focussing on the scope and limitations constraining each of the individual reactions being employed. This can be a daunting task, the skill for which is acquired by experience, and often trial and error.

The three examples shown below are illustrative. The first is a simple functional group conversion problem, that may initially seem difficult. It is often helpful to work such problems backwards, starting from the product. In this case it should be apparent that cyclohexanol may be substituted for cyclohexanone, since the latter could then be made by a simple oxidation. Also, since cyclohexane (and alkanes in general) is relatively unreactive, bromination (or chlorination) would seem to be an obvious first step. At this point one is tempted to convert bromocyclohexane to cyclohexanol by an SN2 reaction with hydroxide ion. This reaction would undoubtedly be accompanied by E2 elimination, so it would be cleaner, although one step longer, to first make cyclohexene and then hydrate it by any of several methods (e.g. oxymercuration and hydroboration) including the one shown by clicking on the diagram

Plausible solutions for the second and third problem will also appear above at this point. In problem 2 the desired product has seven carbon atoms and the starting material has four. Clearly, two intermediates derived from the starting compound must be joined together, and one carbon must be lost, either before or after this bonding takes place. The 3º-alcohol function in the product suggests formation by a Grignard addition to a ketone, and isobutene appears to be a good precursor to each of these reactants, as shown. The reactant and product compounds in the third problem are isomers, but some kind of bond-breaking and bond-making sequence is clearly necessary for this structural change to occur. One possible procedure is shown above. Acid-catalyzed rearrangement of cyclohexene oxide, followed by reduction might also serve.

The useful approach of working out syntheses starting from the target molecule and working backward toward simpler starting materials has been formalized by Prof. E. J. Corey (Harvard) and termed retrosynthetic analysis. In this procedure the target molecule is transformed progressively into simpler structures by disconnecting selected carbon-carbon bonds. These disconnections rest on transforms, which are the reverse of plausible synthetic constructions. Each simpler structure, so generated, becomes the starting point for further disconnections, leading to a branched set of interrelated intermediates. A retrosynthetic transform is depicted by the => symbol, as shown below for previous examples 2 & 3. Once a complete analysis has been conducted, the desired synthesis may be carried out by application of the reactions underlying the transforms.

The above diagram does not provide a complete set of transforms for these target compounds. When a starting material is specified, as in the above problems, the proposed pathways must reflect that constraint. Thus the 4-methyl-2-pentanone and 3-methylbutyrate ester options in example 2, while entirely reasonable, do not fit well with a tert-butanol start. Likewise, a cyclopentyl intermediate might provide an excellent route to the product in example 3, but does not meet the specified conditions of the problem.

Retrosynthetic analysis is especially useful when considering relatively complex molecules without starting material constraints. If it is conducted without bias, unusual and intriguing possibilities sometimes appear. Unfortunately, molecular complexity (composed of size, functionality, heteroatom incorporation, cyclic connectivity and stereoisomerism) generally leads to very large and extensively branched transform trees. Computer assisted analysis has proven helpful, but in the end the instincts and experience of the chemist play a critical role in arriving at a successful synthetic plan. Some relatively simple examples, most having starting material restrictions, are provided below.

Starting with acetylene and any alkyl halides propose a synthesis to make (a) pentanal and (b) hexane. 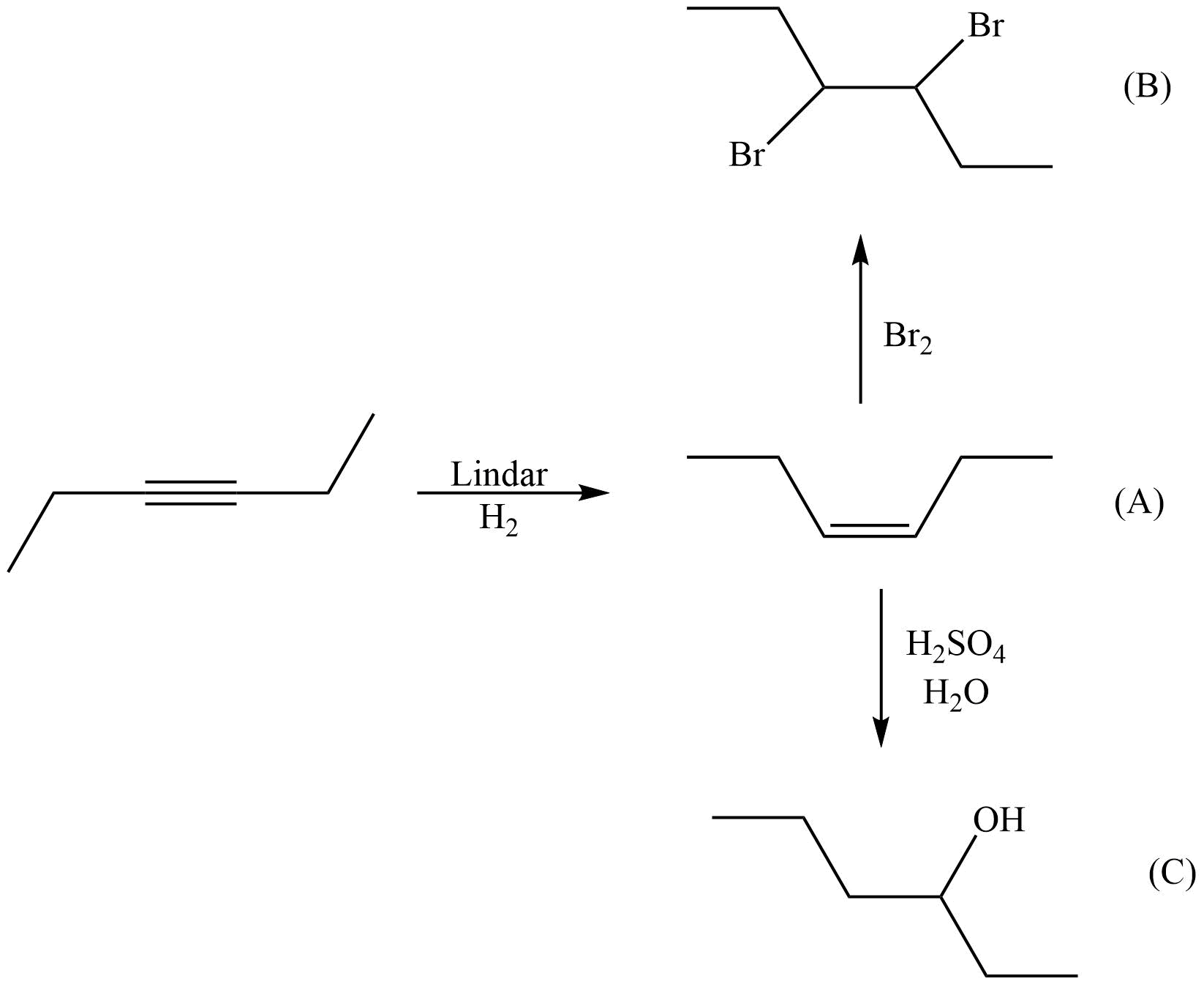 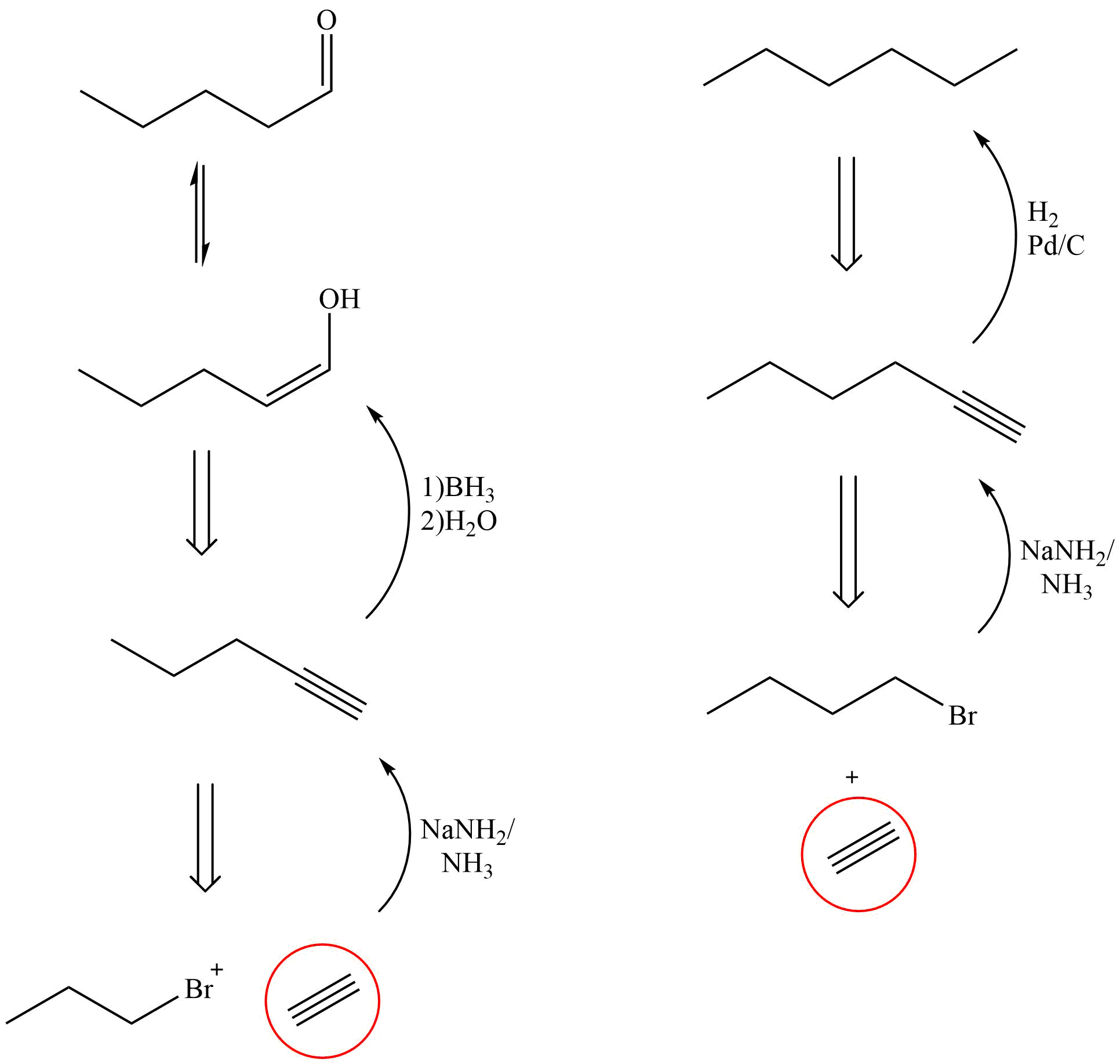